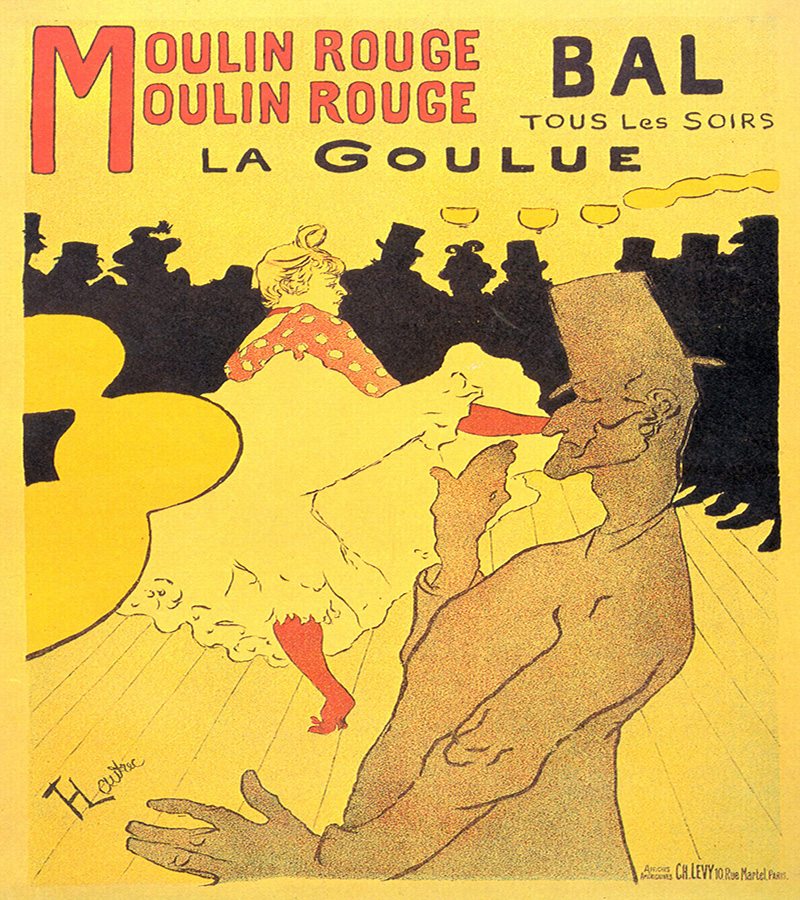 Montmartre was once outside of the physical city limits of Paris, and to this day so when visiting Montmartre, remember – What Goes on in Montmartre stays in Montmartre.  For the elite – read wealthy – good and proper behavior was expected “in” Paris, so when they felt the need to let loose, they headed for Montmartre. 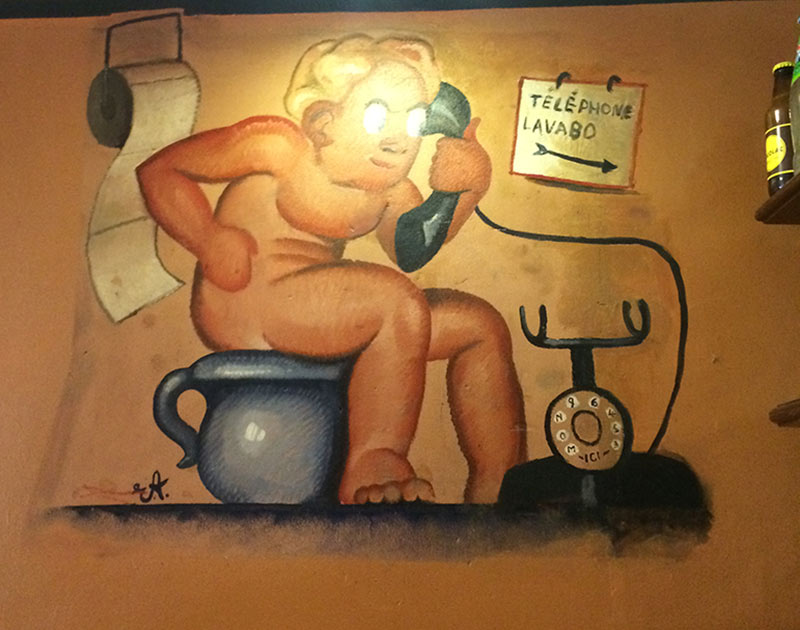 If they saw a fellow well heeled Parisian in Montmartre, then nothing could be said, because they were both after one or two things – sex and booze. So, what went on in Montmartre, stayed in Montmartre. Many people believe that despite the fact that Montmartre is now within the city limits, it is still a place where a few rules can be bent if not totally broken. 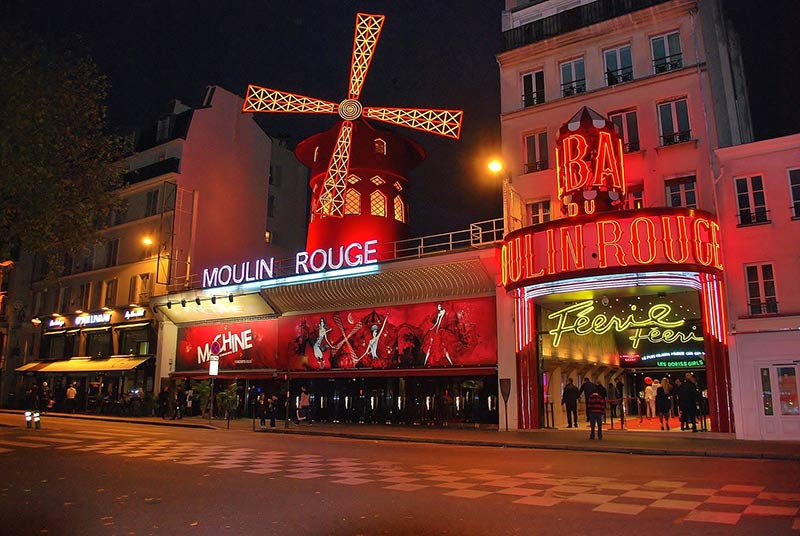 Moulin Rouge was founded in 1889 by Joseph Oller and Charles Zidler. Located at the bottom of a hill in the Montmartre its founders wanted to create a place dedicated to entertainment for a diverse public. It was very popular with the people because is had little boundaries, and gave them a lot of entertainment. Today, The Moulin Rouge  attracts at least 600,000 visitors every year to dine and see the revue performances. Going to Moulin Rouge is synonymous with Paris, and you can get tickets here, which is always advisable as it is such a popular institution.

Montmartre has now become gentrified, though it seems that it may still be a bit of rebel area within the Paris arrondissements. Personally, the best way to see Montmartre for the first time is to take a guided tour with a local guide. We had an educated and very informative young lady, who helped us to understand about this quirky area of Paris. 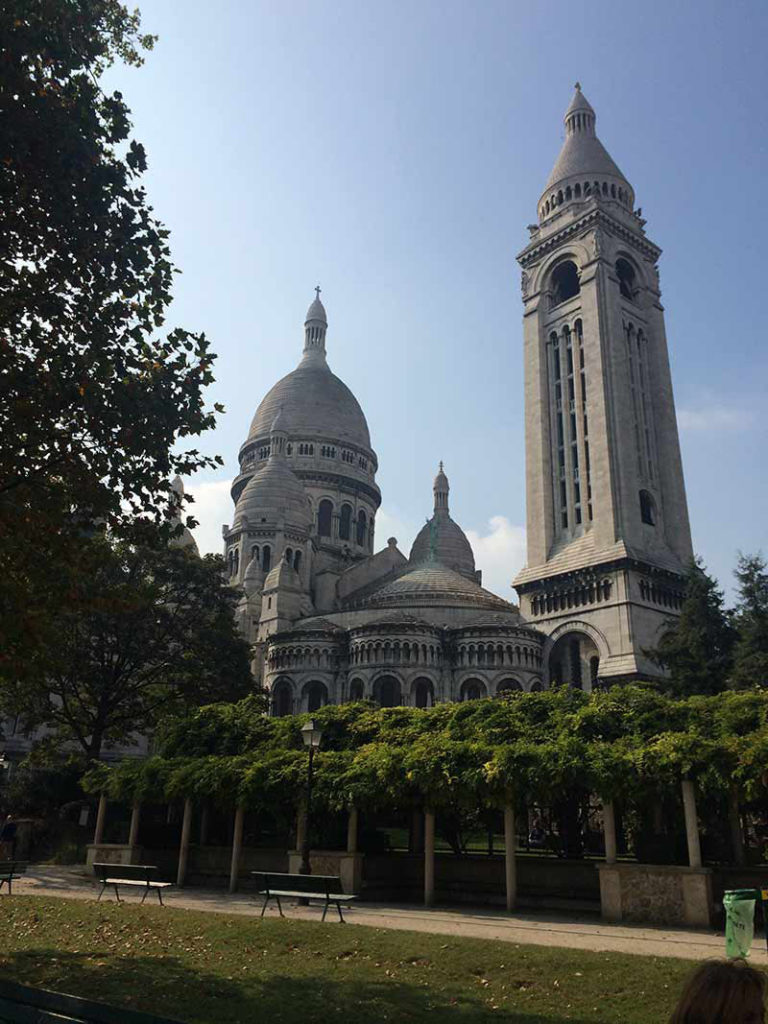 The Characters that have made Montmartre what it is today

Saint Denis is the patron saint of France and, according to legend, the first bishop of Paris. There are 3 versions of this story, the third perhaps being the Montmartre version

1. Denis is said to have been beheaded and then picked his head up after this, walked ten kilometres while preaching a sermon of repentance the entire way.
2. After his execution the corpse rose again and carried the head for some distance.
3. The other version is that he was decapitated in Montmatre and that his head rolled all the way down the hill. His body then decided to run down to join itself back to the head. 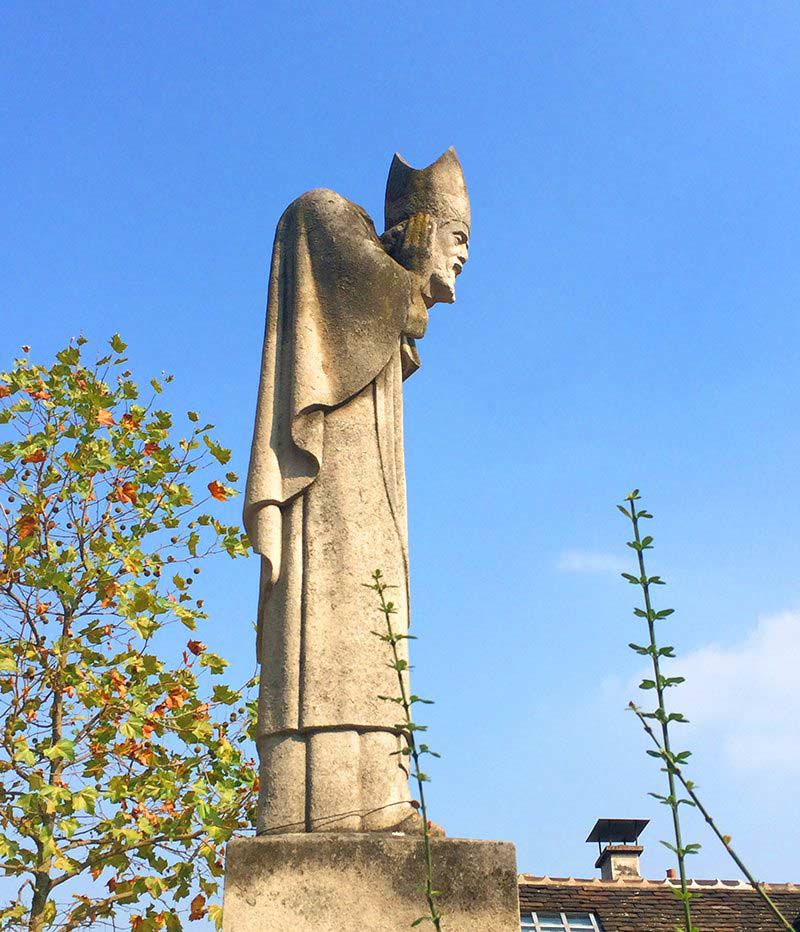 History tells us that Van Gogh lived in Montmartre in extreme poverty with his brother and though his fame came posthumously, he completed many significant pieces of work here in his abject conditions. It was here in Montmartre that he severed part of his ear. This actually hit the newspapers very quickly and that is quite interesting as he was an unknown and poor genius at the time. There has been much supposition as to why he did this. Madness? A fight with Gaughin or a lover’s tiff according to our tour guide. Regardless, Montmartre was the home of this scandal. 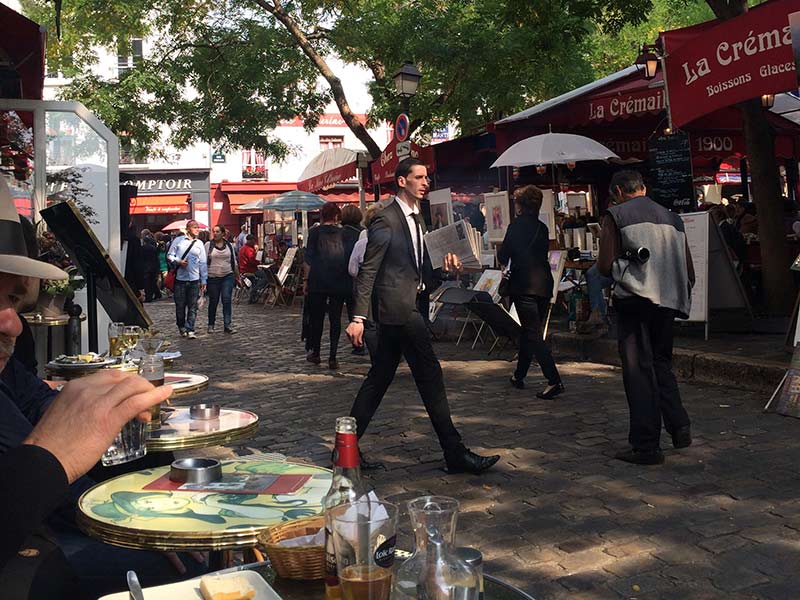 Toulouse-Lautrec was drawn to Montmartre, an area of Paris famous for its bohemian lifestyle and for being the haunt of artists, writers, and philosophers. And here he held court in Montmartre, spending much of his time at the Moulin Rouge and in brothels, where he was accepted by the prostitutes and madams and often moved in, and lived in a brothel for weeks at a time. He had a thing for La Goulue, a dance from Moulin Rouge.

The Belle Epoque Period in Montmartre

The name “Belle Époque” was created after World War I and is the carefree period that went from, 1890-1914. Many artists had studios or worked in or around Montmartre, including Salvador Dali, Modigliani, Monet and Pablo Picasso during this period. It was a lively cultural area where many of the now famous artists had to rely on the generosity of others for such basics as food. A certain café would often give artists their supper for free if they did a painting for them. Picasso was denied a dinner. He became famous and the owners of the café went broke and asked him for assistance. His response was a resounding negative, with some choice sarcasm thrown in.

The Queen of Montmartre.

La Goulue meaning the greedy one was a very popular young dancer with many of the wealthy Parisian men and particularly with Toulouse Lautrec. who turned the cancan into a risqué dance with high kicks and loud shrieks was his favourite. She unfortunately went into decline and lived out the rest of her life begging on the streets.

The Dalida house in rue d’Orchampt has a black spider out the front of this troubled woman’s house, as she was known as “The Black Widow” with very good reason. Dalida was an extremely famous Egyptian-Italian singer and actress. But …

1. She was in a relationship with Italian singer, songwriter and actor Luigi Tenco, but he committed suicide
2. One month later, Dalida attempted to commit suicide by drug
3. Her former husband Lucien Morisse, with whom she was on good terms, committed suicide
4. In 1975, her close friend singer Mike Brant leapt to his death from an apartment in Paris.
5. In 1983, her lover from 1972 to 1981, Richard Chanfray, committed suicide by inhaling the exhaust gas of his car
6. On Saturday, 2 May 1987, Dalida committed suicide by overdosing on barbiturates. She left behind a note which read, “La vie m’est insupportable… Pardonnez-moi.” – “Life has become unbearable for me… Forgive me.” 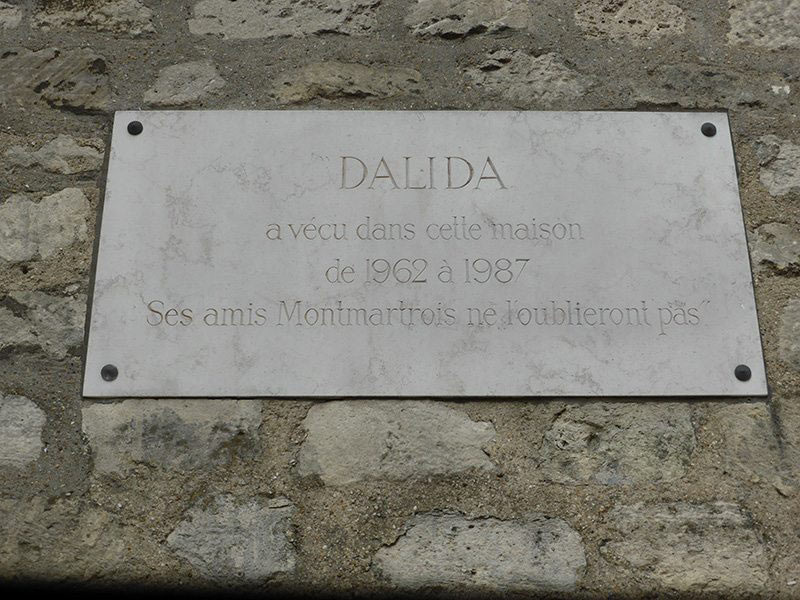 About a Dutilleul, a Montmartre identity

Dutilleul was a fairly normal bloke in a fairly mundane job ..until he found out that he could pass through walls. He then began to use his newfound skills. When his boring boss at his boring job started to annoy him, Dutilleul started to play with his head by walking through walls and suddenly appearing in the least likely places. His boss went mad and was taken to an asylum. Dutilleul graduated to burglaries where he always left his signature “The Lone Wolf” much to the frustration of the police.

He was caught eventually – some believe deliberately. He then got bored in jail and was heading to Egypt to try his skills on walking through the walls of the pyramids, but ..he fell in love with a married woman. The husband figured it out and locked his wife up. This was no issue for Dutilleul who paid her lots of visits, until one day he got a headache, took some tablets and as he was leaving the room, the tablets took effect and his vanished .. and left him …. stuck in the wall … forever. Only in Montmartre. 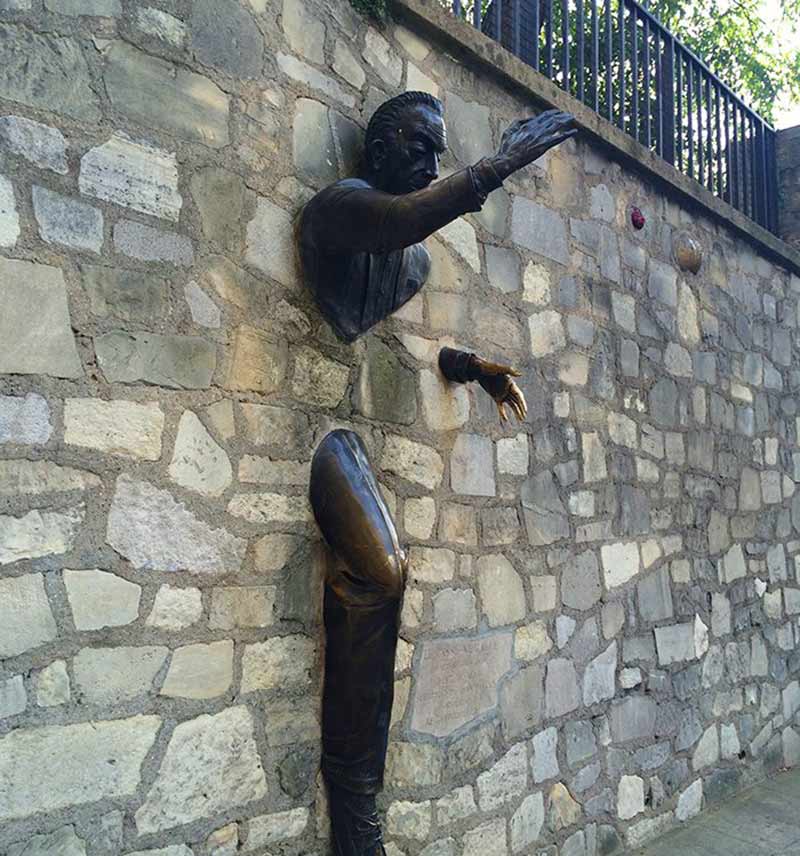 Montmartre today is still a very bohemian village within a city, and still where a lot of innovative things happen. Our guide tells us that it home to the Bobo or Bourgeois Bohemians, sort of like hippy wealthy baby boomers. However an article in 2008, claims that the Bobo is now an extinct species.

In this article it claimed that many of the residents of Montmartre were “urban, wealthy, left-wing, conscious of fashion and the environment, reviled by their compatriots, both courted and denigrated by politicians, their days are now numbered”. Regardless, we were told of their continued existence and might have seen a couple – and it seems to fit the area well. 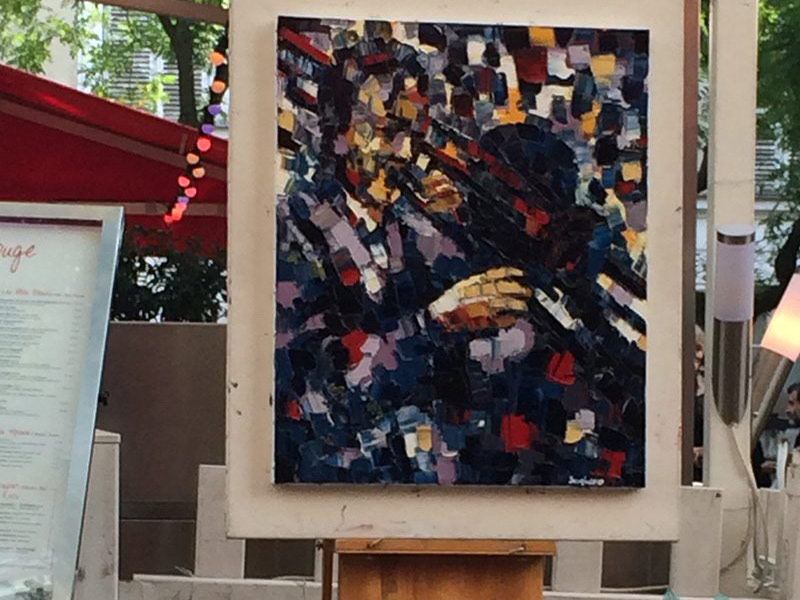 It is also home to countless cafes and to some very interesting art and music exhibitions, with some avant garde electronic music venues being patronized by younger Parisians, like the Boule Noir. There are artists all around the area doing quickie portraits for tourists. Some are selling their works and some are very very good.

At the top of Montmartre is the stunning Sacre Coeur, while at the foot of Montmartre, is Pigalle – Paris’s red light district. Peep shows and sex shops are very obvious, but there are still a lot of places that aren’t so seedy. 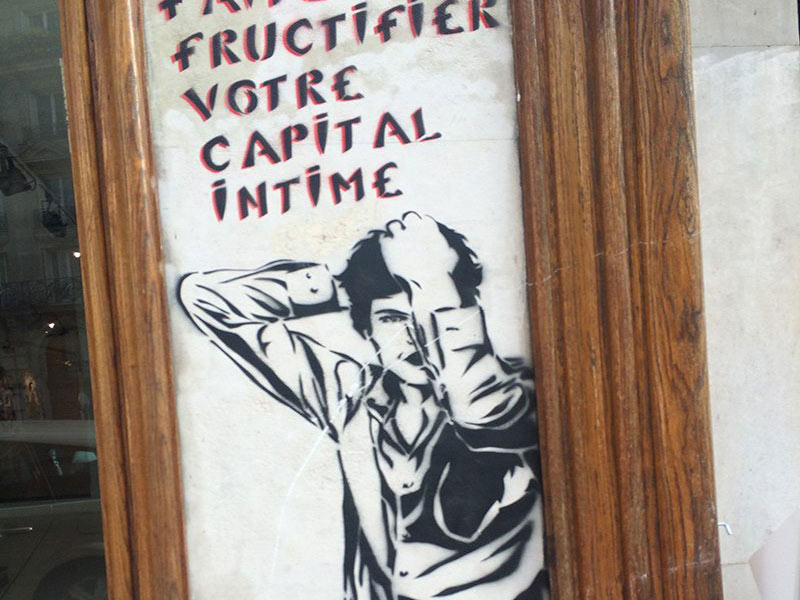 Seeing Montmartre with a guide as we did with Discover Tours gives you all of these stories and more. While you might read about it; seeing each of these places and hearing the stories with a passionate local guide, is by far the best way. We also did the Paris Flea Market Walking Tour and the Night Tour of Paris with Discover Tours.

Paris Metro Information
Montmartre is in the 18th arrondissement and is very easy to reach. By metro, the line 2 will take you there as will line 12.

Montmartre always has and still does attract a different type of person than is normally found in Paris. Fringe dwellers? Maybe, or just people treading their own path. Whatever, ‘What Goes on in Montmartre Stays in Montmartre‘