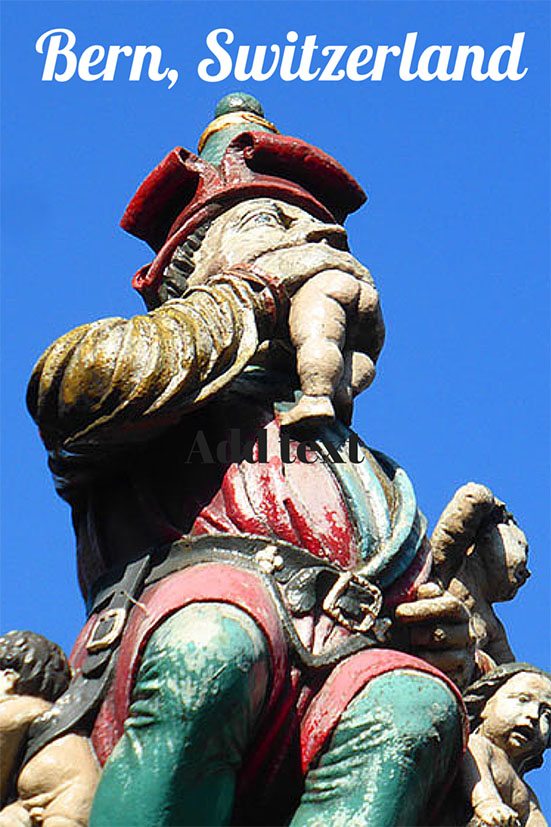 The Old Town of Bern is located on a peninsula of the river Aare and has been designated a UNESCO World Heritage Site.

The Old Town of Bern or Bern Altstadt and not all of the city of Bern is UNESCO World Heritage-listed.

There is a particular reason that only the old town has been awarded this prestigious status. Gordon and I were in the delightful Bern for 3 days, and I can say, that we loved Bern.

Why Bern is such an appealing city

Switzerland is a beautiful country, full stop, and the capital city of Bern is no exception though it is sometimes an overlooked city. Big mistake. In a country where there are so many beautiful cities, towns and villages, Bern is another one to add to your list. It is an underrated city as also claimed by Lonely Planet. For such a little country, it is very big on charm and Bern lives up to all of this. What you will find is that Bern is a friendly town with great people and a lot of things to see and to do. 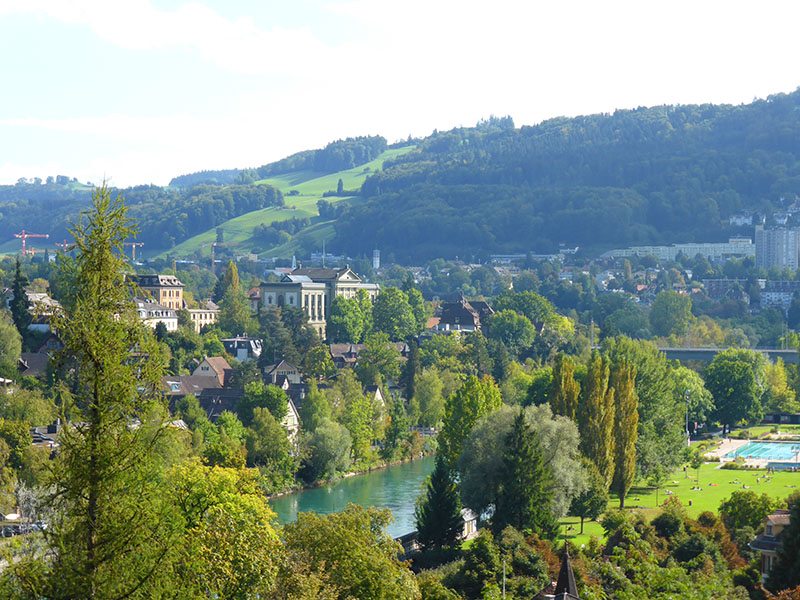 The physical setting of the city surrounded as it is by the Aare River with views of the Alps including Jungfrau, Eiger and Munch on a clear day is amazing. The many medieval buildings throughout the Old Town and beyond are incredible. Bern is also known as the city of fountains. Some cities have that very large village feel, and Bern is one of these. The people are easy going; the food is fabulous and I can see that if you go once, you will return, as we definitely will.

Why a UNESCO listing was given to the Old Town

The best way to see the Old Town of Bern is with a guide who knows all about the history and can explain why this city received the UNESCO listing. We had a great guide who was passionate about her city. Beatrice described Bern as a gothic city dressed in baroque clothing, which was interesting to keep in mind as we walked around with her. However, to understand why it was given the UNESCO status, this is what UNESCO have said of why the Old Town of Bern achieved this very significant status,

“Founded in the 12th century on a hill site surrounded by the Aare River, Bern developed over the centuries in line with an exceptionally coherent planning concept. The buildings in the Old City, dating from a variety of periods, include 15th-century arcades and 16th-century fountains. Most of the medieval town was restored in the 18th century, but it has retained its original character”.

All of this is true – the town planning is amazing,and quite ahead of its time in terms of considering all necessary services, that have endured over time. The Old town is a medieval town and this is very interesting to see. 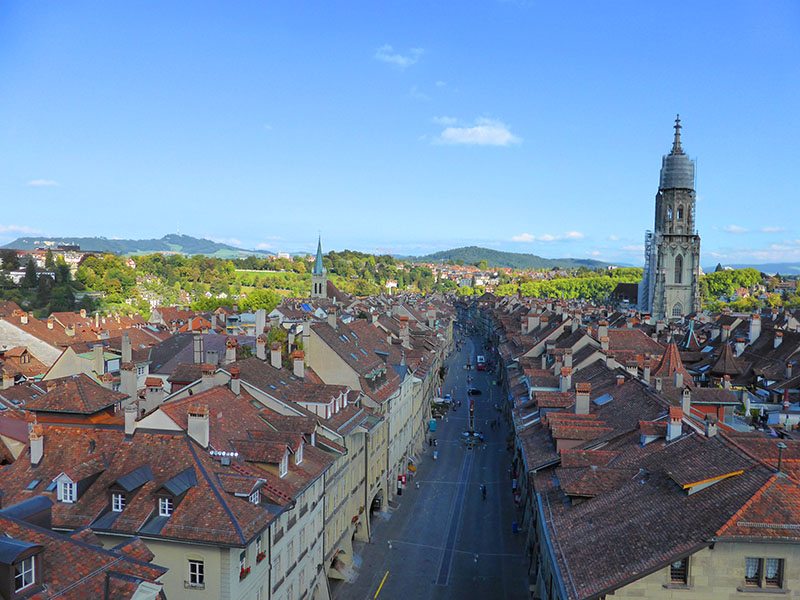 How Bern got its Name

In 1190 one of the founders of the city, had a hunt and said he would name the city after the first animal caught. This animal was a bear, and bear in German, the dialect of this city is … Bern.

The bears used to be in a pit in the Old Town but now there are a few of them in a large pit near the river. The people of Bern are very passionate about their bears.

The Fountains of Bern

Bern has well over 100 fountains, eleven of which still retain the original beautiful allegorical figures. The Kindlifresserbrunnen, or child-eating fountain, is particularly interesting. 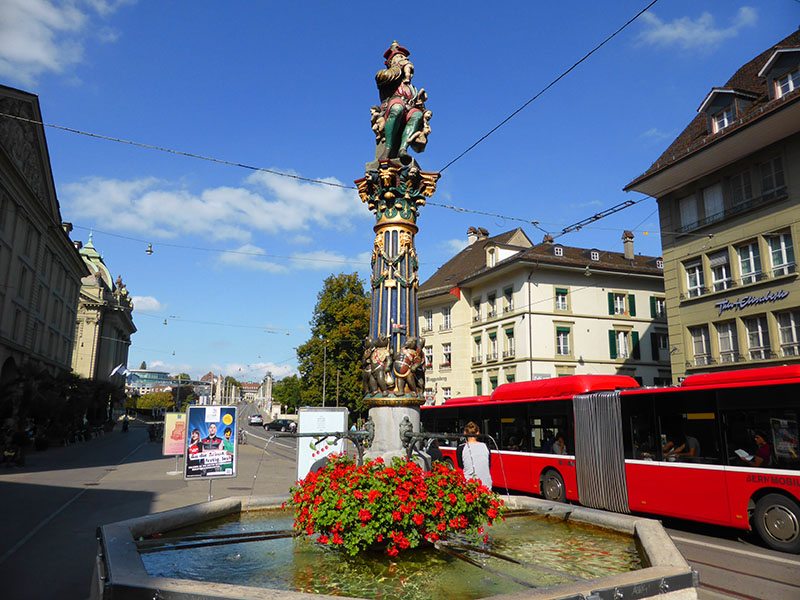 The ‘Zytglogge’ clock tower is the centre of the city. This ornate astronomical clock has moving figures, including bears, and was built in 1530. The astronomical clock shows the hour of the day, the day of the week, the month, the month itself, the zodiac sign and the phases of the moon.

Legend has it that Albert Einstein, who lived not far from the Zytglogge, was watching the buses coming round the tower and wondered what would happen to them if they moved at the speed of light … this led to his theory of relativity and is known in Bern as his Wanderjahre. You can also see his house, The Einstein House at Kramgasse 49 where he lived from 1903 to 1905.  You can also have a coffee at the Einstein Coffee Shop, and your coffee has an ‘E’ on it ☺ 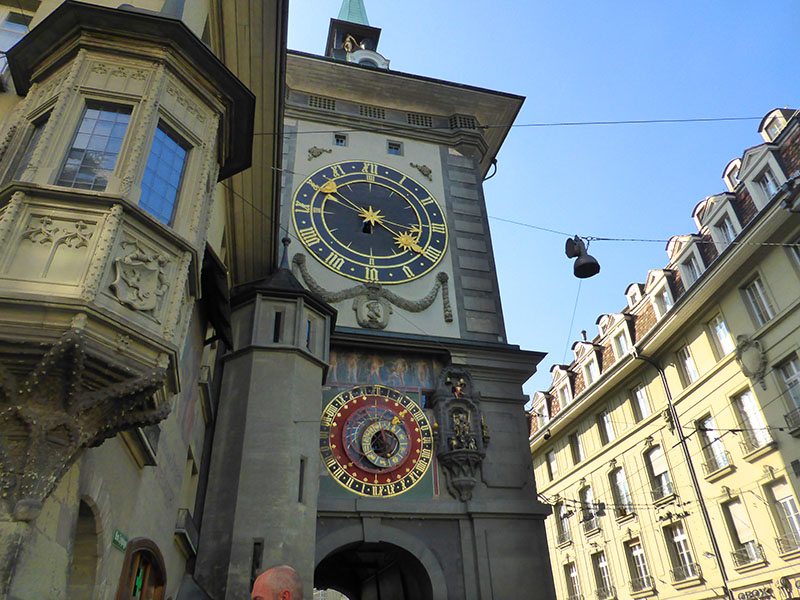 The Bärenplatz is a large market square lined with important buildings as well as being a popular meeting place for people. There are many outdoor cafes, and the Swiss national parliament building is at the end on the Bundesplatz and it is here that the cows from the Sichlete Festival gathered in all of their glory. 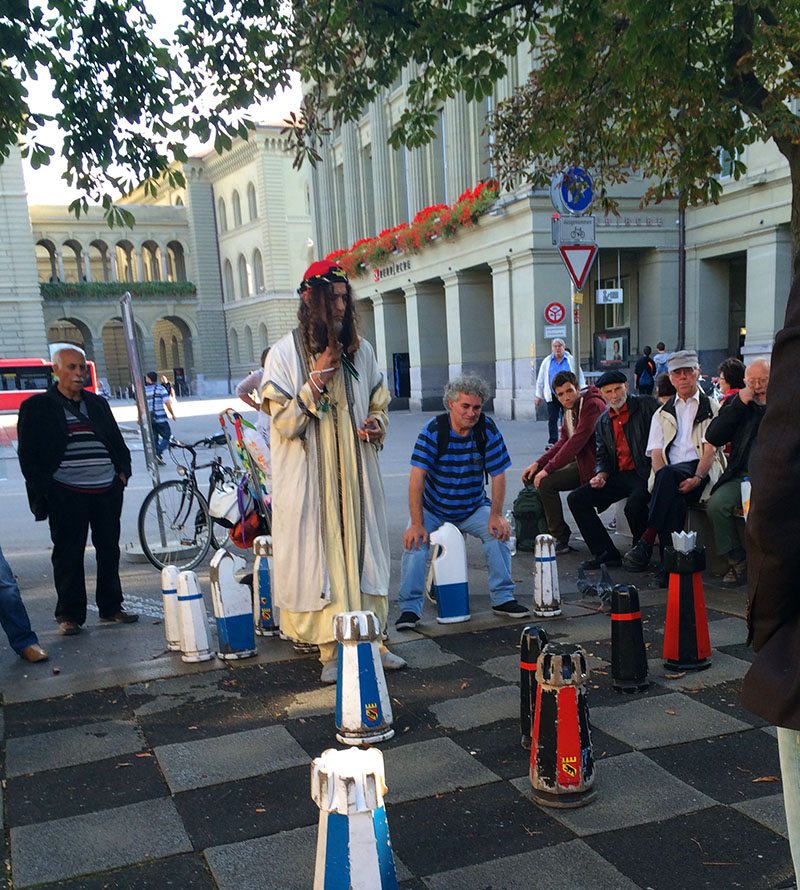 The Nydeggbrücke Bridge leads from Bärengraben into the old city. As one of the highest bridges in the city, it offers great views over the Aare River and the city. 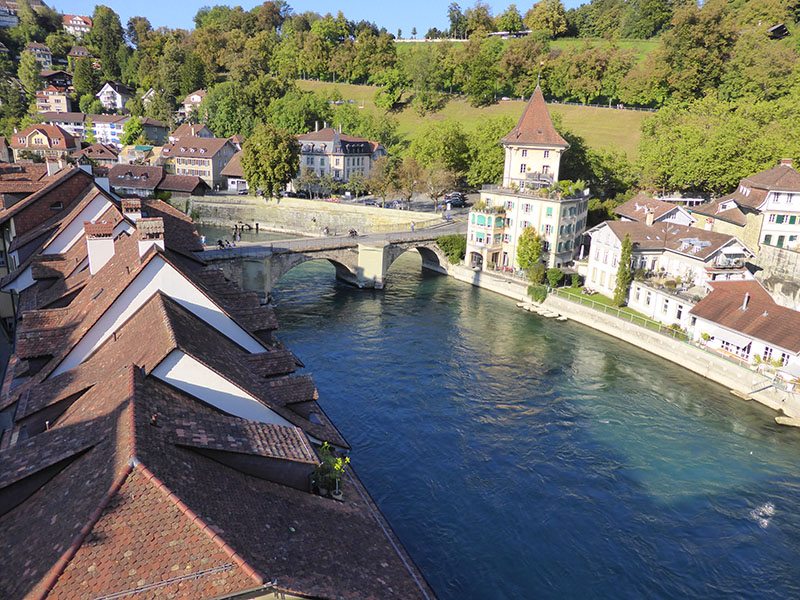 Bern has 6 kilometers of these arcades, making it one of the longest covered shopping promenades in Europe. 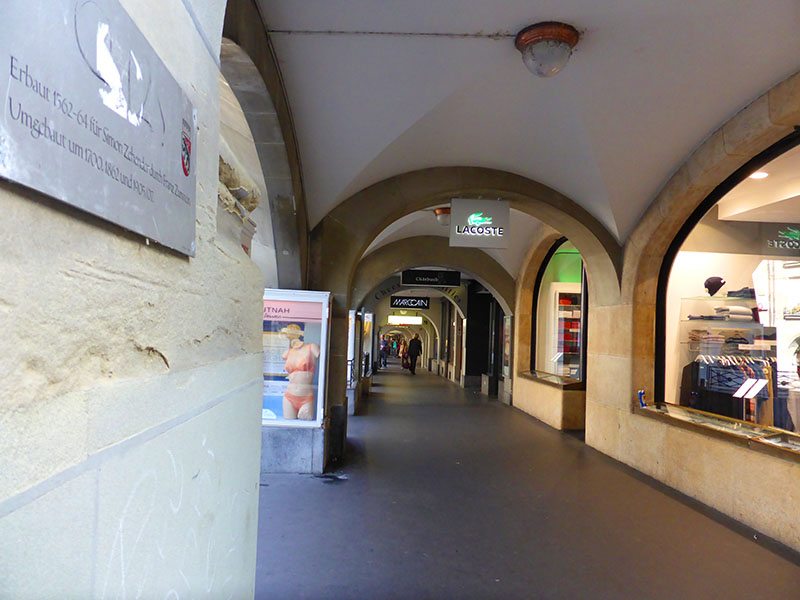 The Holländerturm is thought to have been part of the 1255-1260 city walls. It was later converted to a house, and we are led to believe that as drinking was not allowed in Bern at the time, the Dutch gathered here to imbibe attracting many Bernese visitors to their hole in the wall.. 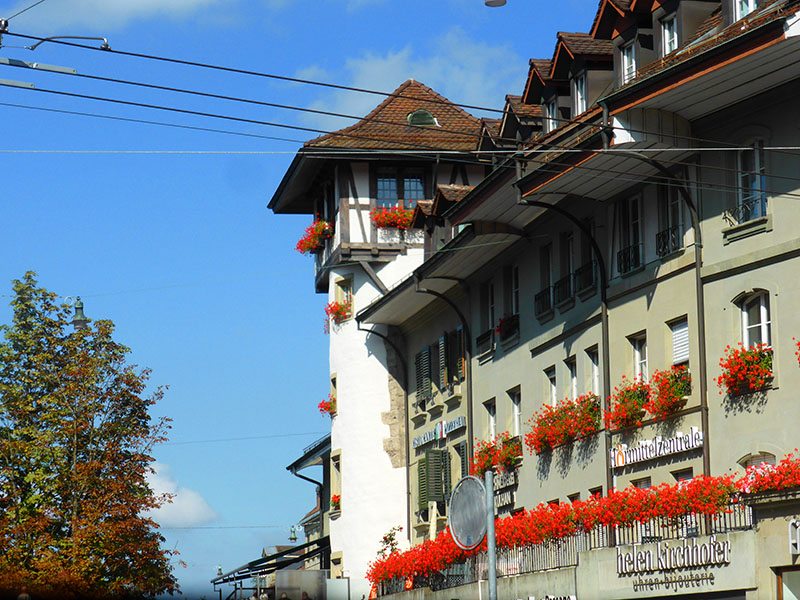 The Cathedral or Münster

The Munster Catherdral has a 100m tall tower and some striking views from the top over Bern and the Aare River. Though many of the elaborate details were removed during the Reformation, there are some excellent reminders offering some frightening scenes at the entrance to show you exactly what hell might be like if you didn’t do the right thing. The church is used for many concerts and the local people are avid attendees. 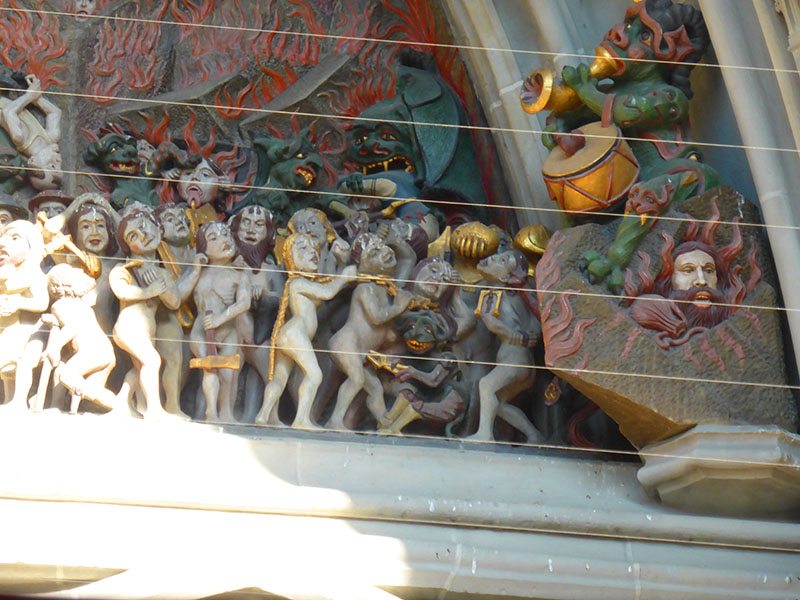 Bern has many underground cellars. All of the buildings surrounding Kramgasse contain cellars.  These have been were mainly used to store the goods of the patrons of the buildings. Many of the cellars are now trendy little cafes or shops. The very significant Kornhauskeller cellar is a different case in point. This large and beautifully decorated space is enormous. And very mush worth a look at and definitely worth having a meal at. 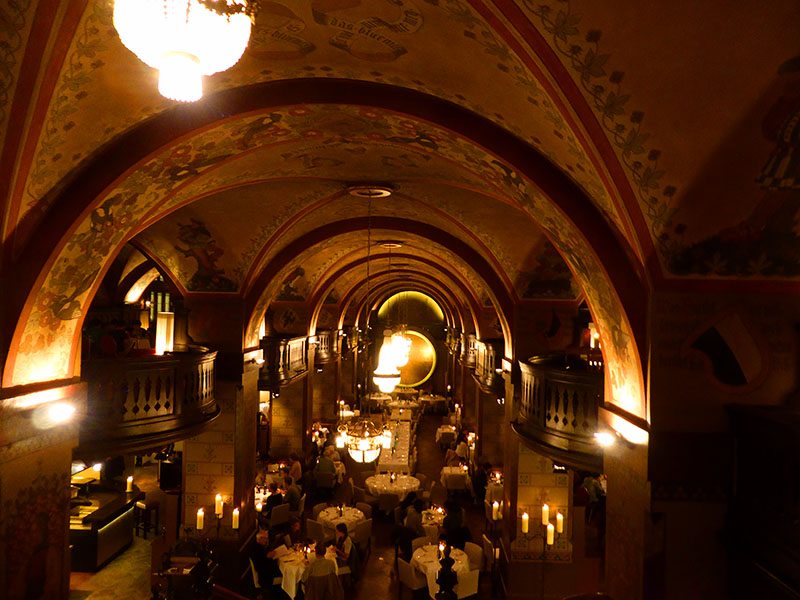 Some cities are just easy going. Bern is one of these. Big on hospitality, intensely proud and yet a generous city. We felt very comfortable in this city, and the UNESCO Old Town is amazing.

Bern is an hour by train from Zurich. Trains in Switzerland being totally efficient it is a really very pleasant way to see the countryside. Consider purchasing a Swiss Pass if you are travelling around.

Thanks to Beatrice for showing us the Unesco World Heritage Site, the Old Town of Bern and telling us so many interesting things. Thanks also to Michelle Bisang of Bern Tourism . We will bring you a coffee when we are in your beautiful city next time ☺