Peru – “Outside my Front Door” by Seed, Bark & Root 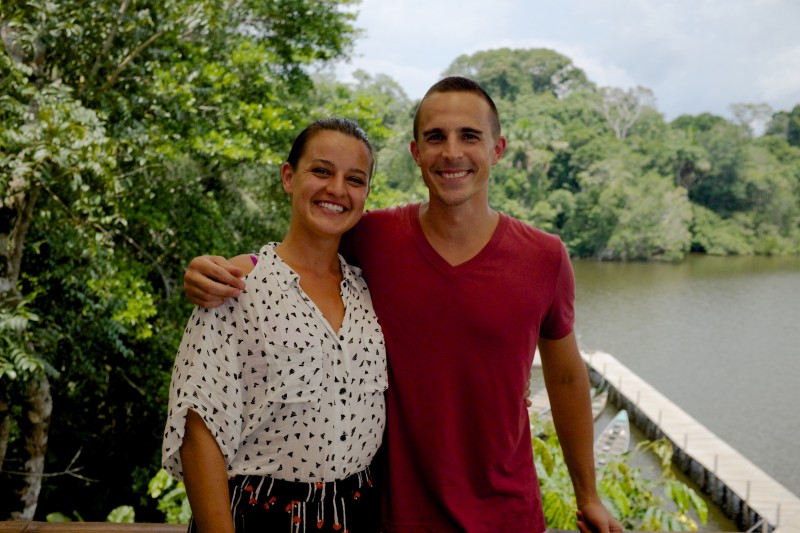 Peru is a country in South America which is home to part of the Amazonian rainforest, as well as Machu Picchu, an ancient Incan city high in the Andes mountains. The region around Machu Picchu, including the Sacred Valley, Inca Trail and colonial city of Cusco, is rich in archaeological sites.

Kayci and Joe of Seed, Bark & Root are a couple of restaurant servers from San Francisco. They left home on January 8, 2014 to chase a dream of exotic flavor and culture.

Inspired by years of working in the hospitality industry, they decided to get hitched in a modest wedding, saving all of their pennies for what they knew would be the adventure of a lifetime.

Neither of them is a travel guru, they are just two regular people who decided to take a wild leap and leave the states with a one way ticket. Their website is continually evolving as they document their experiences along the way, and learn exactly how to create their travel blog.

Kayci and Joe say that they “hope to share some insight with you, and inspire you. Whether it be in your cooking, your day to day life, or to chase that wild dream that has always been nagging you in the back of your mind. We look forward to sharing our adventure with you, and are open to any and all advice, travel suggestions or tips for when we are on the road. So far so good”

We reached Lobitos in the middle of the night, exhausted from the day of travel that it took to get here.  The last leg of the journey in a rickety van that seemed ready to fall apart at the seams as we careened down a pothole riddled gravel road. We all held onto whatever we could, headlights barely illuminating the road in front of us, our driver seemingly unconcerned with seemingly large possibility of a collision. Total darkness enveloped us completely once we left Talera, a small port city that is the last town before Lobitos.

Reaching our destination, we quickly unloaded, trying desperately to find our legs after such an adventure and glad to be on solid non-moving ground. Our host was awake and waiting for us, his property a small oasis of light in the otherwise black night. We were shown our home for the next few days, a cabin with a private bathroom and shower, with a queen bed, it all looked to good to be true. 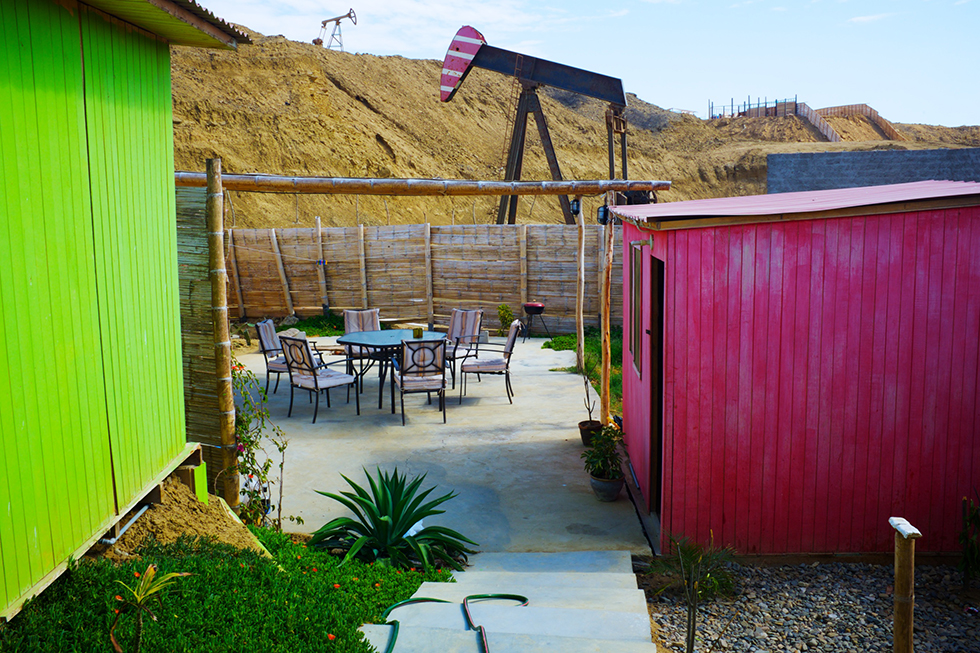 We sat up visiting for a short while, able to hear occasional crashes of the waves, a sign the ocean was not far. The night was mild and had a slight breeze, such a lovely way to unwind after the day. I spied a hammock as we headed for bed, and claimed my spot on it in the morning.

I rose early that next morning, as I am prone to do, and dressed quickly to take in my surroundings.  Stepping into the morning sunlight, a briny note to the air, I walked to concrete path towards the hammock and sat. The sun was already bright in the sky, as I looked around, speechless to realize there was nothing to speak of between our cabins and the water. Blue skies met ocean of only a slightly darker hue, its waves cresting on the rocks and sands of the beach. Unable to stay here for a moment longer without exploring, I walked barefoot out of the bamboo gate and along the gravel path to the water. 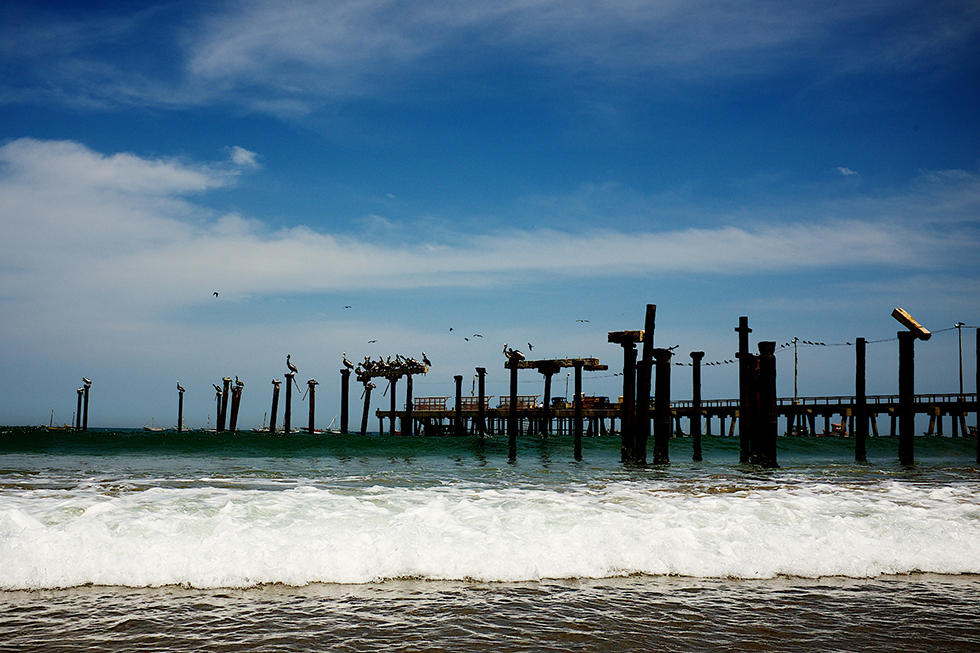 There are very few houses at this end of the beach, which I later learned is referred to as new Lobitos. Tres Cabanas, the cabins we are staying at are the second to last homes at this end of town. There are just a few modest cabins dotting the landscape to my right as I near the water, all done in a similar style, with palm frond leaves as roofs, and many also featuring bamboo thatched sides. Passing a few cabanas just before reaching the sand, I surmise that these must have been built by the city, as a shelter from the blazing sun, probably well used during the peak surf season. 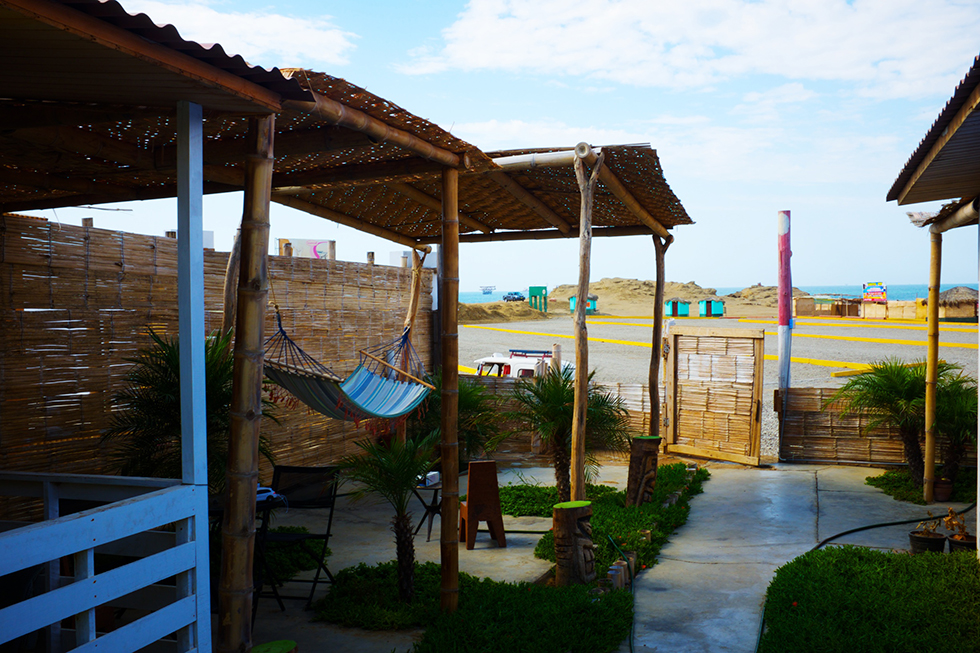 The sand is extremely fine here, very few shells littering the beach, the only ones I see, mother-of-pearl glistening which against the tan backdrop. I climb a small point to my left, scrambling up the huge rocks dusted with a fine later of clay powder, my feet instantly coated. I can see a fisherman using just a spool of line, where to buy cialis cheap with no rod, casting his lure out, barefoot and unconcerned by the waves crashing up and wetting his trousers. A slight breeze offers relief to the already warm sun hitting my shoulders. I sit to watch the man for a while, mesmerized the sounds of the ocean and the sea sprays circling high over head, distinctive tails forked, they harass a lone pelican fishing in their territory.

In the distance, massive structures lined the distant horizon, I learned later that Lobitos had been originally founded as an oil town. Lobitos Oil Limited, an English company came in and built an entire town for its workers, the area that is now called “old Lobitos”. The oil towers struck me as slightly ominous in such a gorgeous area, but oil is the heartbeat of the town. 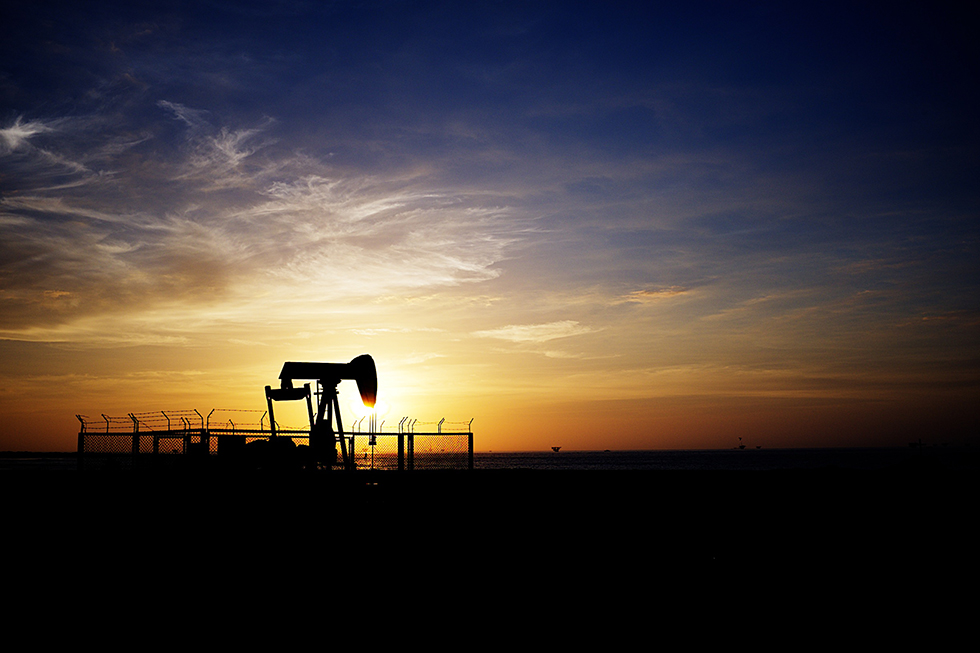 The man proudly displayed the fish he had just caught, removing the hook; he sets it on the rock and quickly begins packing up his belongings. He whistles a tune, and I scoot closer to the edge where he stands trying to get a better look at the gorgeous fish he had caught. A huge wave suddenly crashes up on the rocks and drenches me, a cool relief to the persistent sun.

Climbing back down the rocks, I head back to the cabins to see if anyone else has stirred. I find they have upon my return, and myself, Anahi and Alessandra split off from the two men and go for a walk along the beach. We are eager to take a look at old Lobitos, to take pictures and explore.  We pause halfway down the beach, beneath a hill featuring a large surfers hostel La Casana, to take a dip.

The waves are gentle, and the water not the shock I anticipated. I quickly dove under, refreshed by the cool salt water. The salt stinging my eyes as I come back up, I dive under again so excited to be in the water. This is only my second swim of the trip, the last being a couple of weeks ago, in Paracas. We stay in the water for just a few minutes, enough to cool off and refresh.

We lay our blankets to dry in the sun, attempting to take pictures of the massive flock of birds, the same I saw earlier, lazily circling above our heads. At least a hundred birds were there, riding the current of hot air rising off the beach. Sunscreen comes out and mixes with scent of ocean mist and baking sand.  Lounging for a time, before hunger calls us away, we pack up and continue our trek, a pier to the very north not far now, Populated with stands and moto taxis, it looks busy.

We turn away from the water at a ramshackle building labeled as the surf academy, it’s nearest neighbor a crumbling building that has the look of an old hotel. We take a closer look at the building, snapping pictures and stepping over barbed wire. The entire façade has slipped off and now rests on the ground, its roof caved in the center and mold visible inside of its rooms. Black vultures sit towards one end, completing the dire scene.

We move on, broken glass littering the ground, walking carefully from one forlorn building to another. An empty school house has befallen the same fate as the lodge, front door swinging in the wind, a punishment room visible underneath the stairs as the door opens. We carefully step inside, exploring the abandoned building. Evidence of squatters in a couple of rooms entices is to continue moving on less we upset some of the newer inhabitants. We meander for a moment longer, amazed at the disrepair of the area, stray dogs wander the streets, long tongues trying to cool off in the heat. 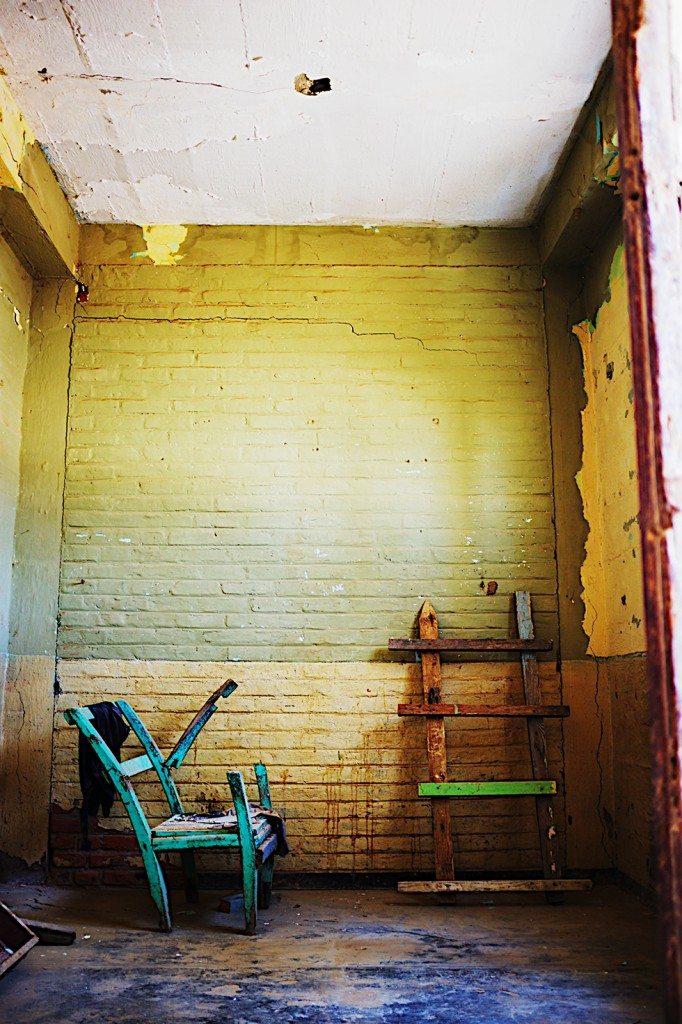 Breakfast is at El Tranuil, a building that was erected with the rest of the town, it is one of the few still in working order. Hungry after our walk, we order breakfast, eggs with bread, eager to eat and head back. My heart sunk as the plate was placed in front of me, bread visibly molding.  We tried to tell the man, but he seemed completely unconcerned as he went back to his crossword puzzle. We ate our eggs in silence, paid the bill and got out of there as fast as possible.

Zipolite, Mexico – Outside My Front Door