Outside Our Own Front Door #SydneySeige #illridewithyou 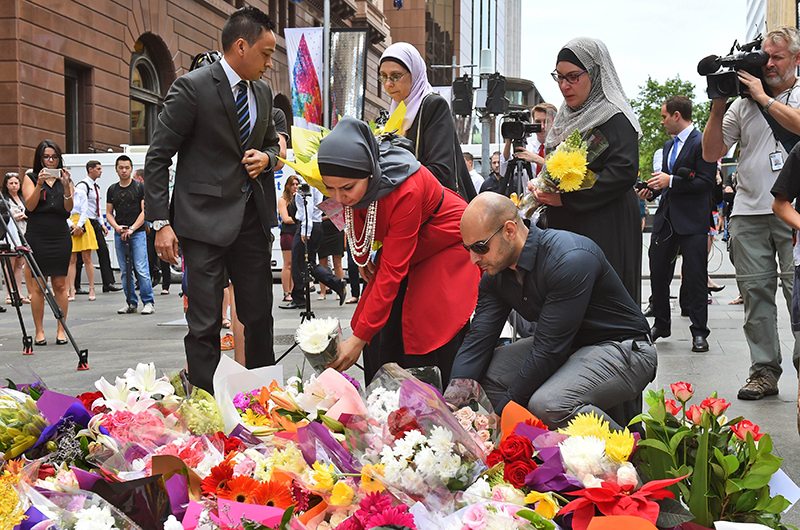 Outside Our Own Front Door #SydneySeige #illridewithyou

To the families and friends of those who lost their lives in the Sydney Siege and to those who were held hostages in this repulsive situation – our thoughts and prayers are with you – as are Australia’s and indeed the worlds.

We live in Australia and live very close to Sydney, where we have family living and working there. We first saw this drama, the Sydney Siege unfold as we sat waiting at the dentists at 10am on Monday morning. It became a day where we sat glued to media for the rest of the day and night, hoping that a peaceful resolution would be achieved. I won’t deny that our 1st thoughts were of concern for Gordon’s son; my lovely stepson and our beautiful niece who both work in buildings in Martin Place, and who both love their morning coffee.

We debated whether to text them to make sure that they were ok, but that fleeting feeling that ..what if they were in the Lindt Café and a phone rang and may frighten the gunman, made us choose not to. There were parents and friends of loved one’s who were in the cafe who did not know, but themselves must have agonised over this. What we did do was to wait and then my sister rang to say that my niece was in lock down, shortly followed by our son saying that he also was in lockdown. You know what – we felt relieved for their safety that they were in a controlled environment. They were lucky.

We watched as we saw this drama unfold. We watched as the first 3 people escaped and were heartened though very concerned with the total fear shown on their faces. We knew even more so then, how very serious this situation was. They were terrified.

We listened to our Prime Minister speak, and we heard and saw his utter distress, yet his total faith in the police and the authorities involved. He made us proud of his humanity and his ability to give us faith in the systems in place. Politics was not part of this day at all.

We heard of the deep distress that this was causing the Muslim communities in Australia. We felt their distress and their care for those involved in this hostage situation. We heard very clearly that they did not condone this situation and were indeed unaware of what or who the person was, and that this person was an individual hiding behind a flag that actually is a symbol of the Muslim faith not of some terrorist action and we felt their fear and their shock.

We immediately joined the #illwalkwithyou to make sure that no one was ,or is, vilified because of one lone loser. We will not accept nor tolerate any bigotry or racism in this country. We will continue to treat people as people and not have them maligned by one freak. 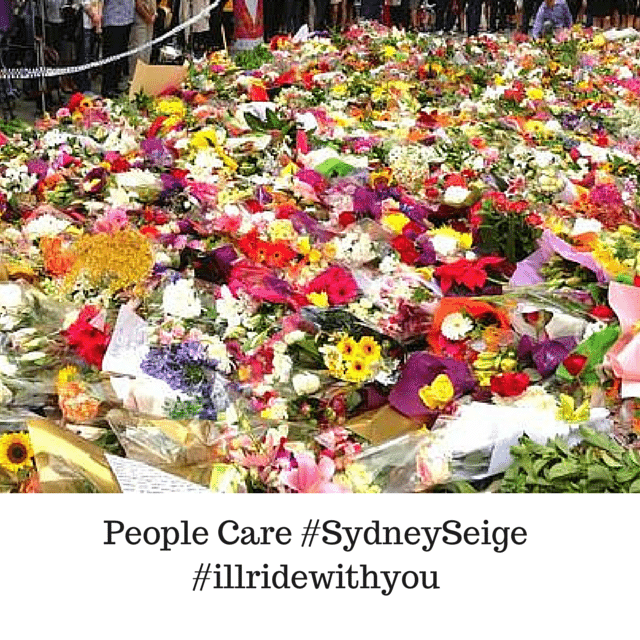 We have lost lives; people are injured and we are all in shock that this could happen outside our own front door. However, what has come out of this is a massive display of human caring and kindness. People of all ethnic backgrounds, ages, and religious beliefs are all in shock and deep sadness and yet have bonded together. Just look at the floral tribute that has and are still forming in Martin Place, and you will see this. The tissues are being handed out by people in the crowds to one another ..because we all need them. This again shows the care that we are showing to one another.

I have no doubt that this also happened after the 9/11 in the United States, and after the many other incidents that we as people are now dealing with. The majority of people are good people, are caring people – a few are not and have no place in our world.

The killing spree in Pakistan then came on the heels of the Sydney Siege. This is totally shocking. We must also think of the dreadful impact on these people who are facing these atrocities so often. We have all had enough of this, but that will not stop the fact that the majority of people are very good, decent and caring people.

There are some scumbags around who are racists and bigots. I cannot figure these people out. The best we can do is what we are doing – actively caring for one another, showing publically that we care and being a part of #illridewithyou

We are a resilient people, and we will stand together because not to, would be to give in to terrorists and to those who seek to harm people for no reason. We will continue to care for one another because that is the Aussie way, and I believe the way of people all over the world.