Why the Japanese love KFC for Christmas? 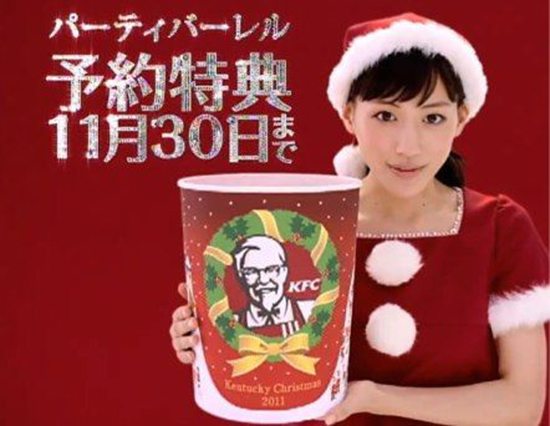 The Japanese love KFC for Christmas.

One of the questions asked in a recent travel quiz was, “Which country is obsessed with eating KFC on Christmas Day?” and to my shock, horror and bemusement, the answer was Japan. As you may have gathered, we are very regular travelers to Japan and think we know a bit, but this one was a curve ball.

So it got me wondering, WHY? I mean, KFC over any other wonderful food that the Japanese have on hand, would you ever choose this as your Christmas food of choice? This is what I discovered. Christmas is a relatively new thing for the Japanese bought on relatively recently because of their interactions with people from the West. They started to embrace the tradition, and particularly those with small children. Unlike western counterparts, there was no tradition to fall back on so in effect they emulated American consumerism and celebrations.

Smart little KFC. After hearing an expat complaining about not being able to find traditional turkey in Japan nor chicken as a substitute, decided to go into total and complete overdrive and ram advertisements down the throats of the Japanese about all that is Christmas and, of course, their ‘chicken.’

How KFC Marketed this to the Japanese

This massive marketing campaign worked, really really well. KFC have to be given a lot of credit because understanding the market meant that they needed to address all of the consumers needs and wants and that means for the Japanese, ‘cake’ as the cake is associated with many of their own celebrations.

So the ‘big’ favourite that the Japanese want and have to book up to 3 months in advance for, as well as queue around the blocks for hours is the barrel chicken which is a barrel full of fried chicken with a cardboard divider and a Christmas cake underneath. A party barrel goes for ¥4,090, or $38, and includes a Christmas cake.

I mean seriously, this is clever marketing. Such is the zeal for KFC that even the national airline carrier JAL commenced serving KFC in late 2012, on its flights for 3 months around Christmas time. There are now more than 1,200 KFC outlets all over the country. The Kentucky for Christmas ads have been airing since the 1970’s, and people still want this ‘delicacy’. And the Japanese don’t call it KFC by the way, it is just Kentucky.