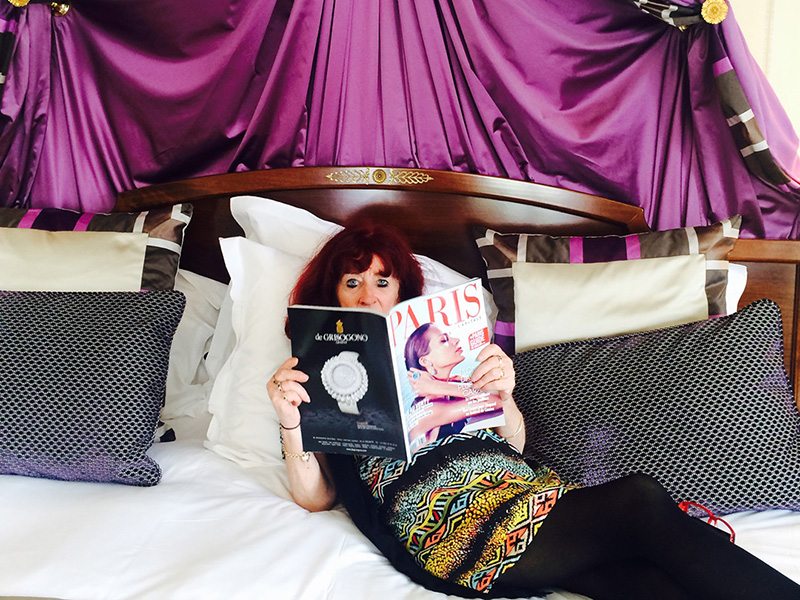 This is A Love Story at Hotel Napoleon Paris

Paris and Love are synonymous. They just go together. Paris is the City of Light and also the city of Love. It was with great pleasure that we discovered that Hotel Napoleon Paris was also founded on love, a love story that will bring out the romantic in us all. 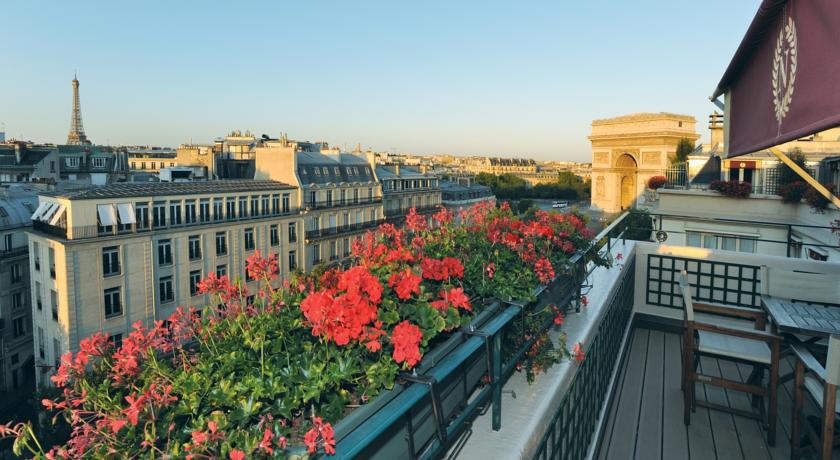 A wealthy Russian businessman named Alexander Pavlovich Kliaguine met a young Parisian student at a Literary fair in Paris. They fell head over heels in love with with one another. They wed in the1920’s and as a wedding gift, he gave her the Hotel Napoleon Paris in one of the cities most prestigious neighbourhoods, the 8th arrondissement. This was so that his sweetheart could entertain high society in a luxurious environment.

To this day, the hotel stays in the hands of the Kliaguine family and is one of the few hotels in the world that does not belong to a chain.

Many of Russia’s elite came there to enjoy themselves with Alexander Pavlovich Kliaguine and his new wife, and it soon became a very popular hotel with other people such as Errol Flynn, Orson Wells, Steinbeck, Dali and the everywhere man, Ernest Hemingway. 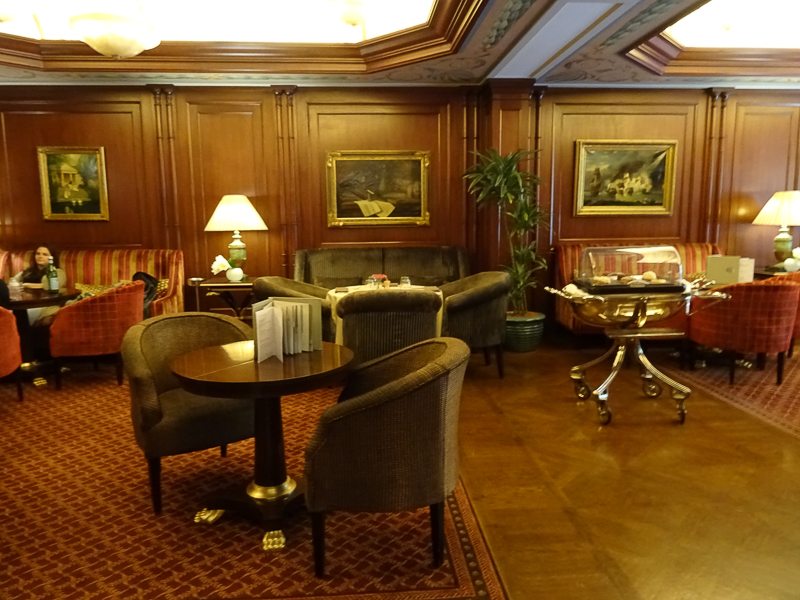 About the Hotel Napoleon Paris Today

The hotel has the ideal location that would woo any young girl. It is located next to the Arc de Triomphe which Emperor Napoleon had erected, 100 metres from the Champs_Elysees and is surrounded by stunning architecture that notable Baron Haussmann created.

For latest prices for staying at this hotel. click here. 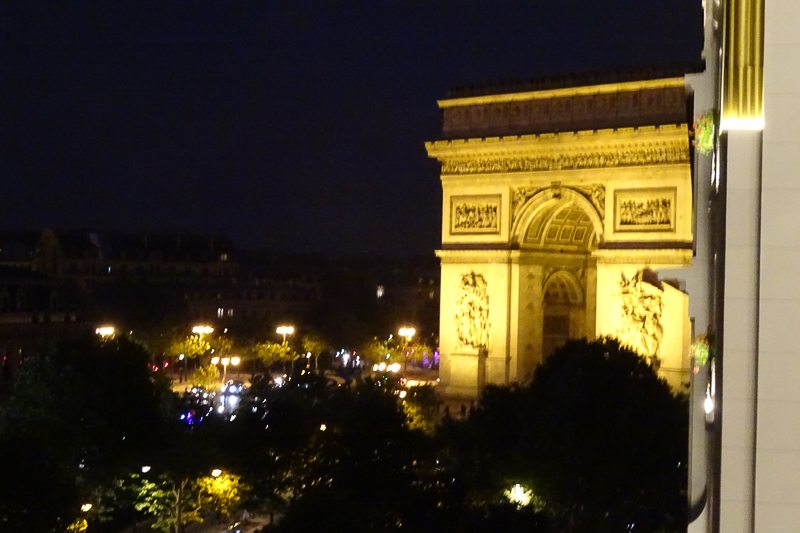 With just 51 rooms and 51 suites, this hotel retains the intimate feel that first attracted the young suitor. The reception areas are regally decorated in royal ruby red and gold patterns. The décor is very French society, and this is what makes the hotel so attractive to guests, both past and present. While it has all of the amenities that modern travelers want and need, it still retains that feeling of Paris in the 1920’s when Paris was the place to be. Paris had claimed their rightful place as a beautiful and cultural city years before. However, it came onto the world stage after the Exposition Universelle of 1889, when the Eiffel Tower was unveiled (so to speak). 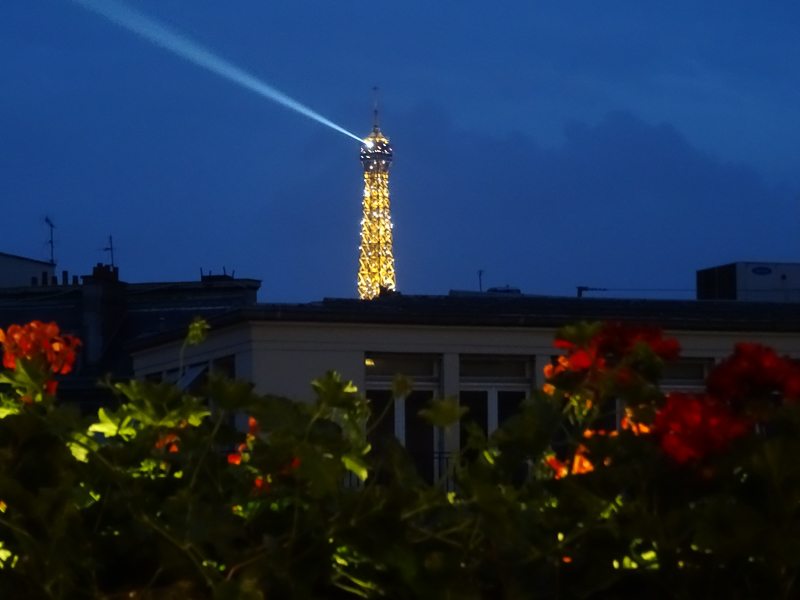 The rooms have views of either a lovely courtyard or look at the Arc de Triomphe, and the Eiffel Tower as ours did. They are elegantly designed with rich purples and golds and though renovated, retain that Parisian charm of bygone times. Each room is decorated in different colors and has traditional fabrics and trims with all of the modern amenities, including some lovely Napoleon toiletries by l’Occitane in cute and very Parisian petit shopping bags. 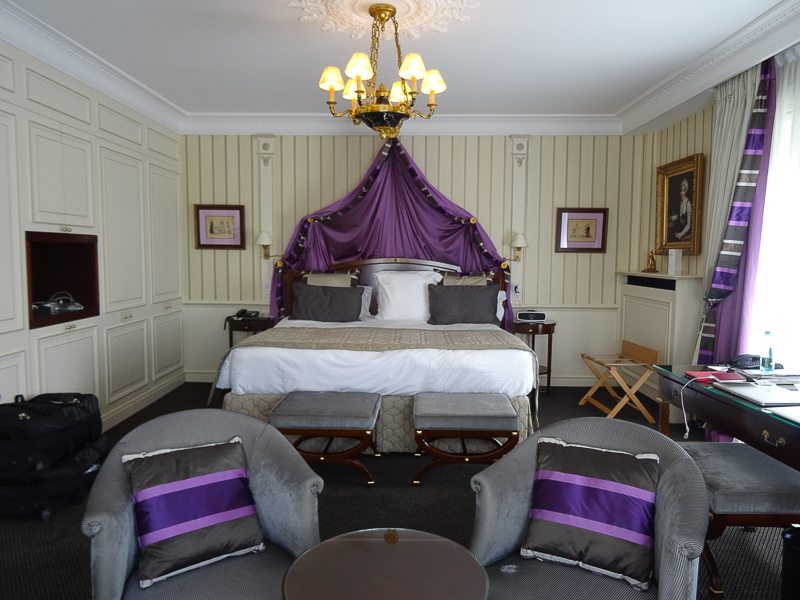 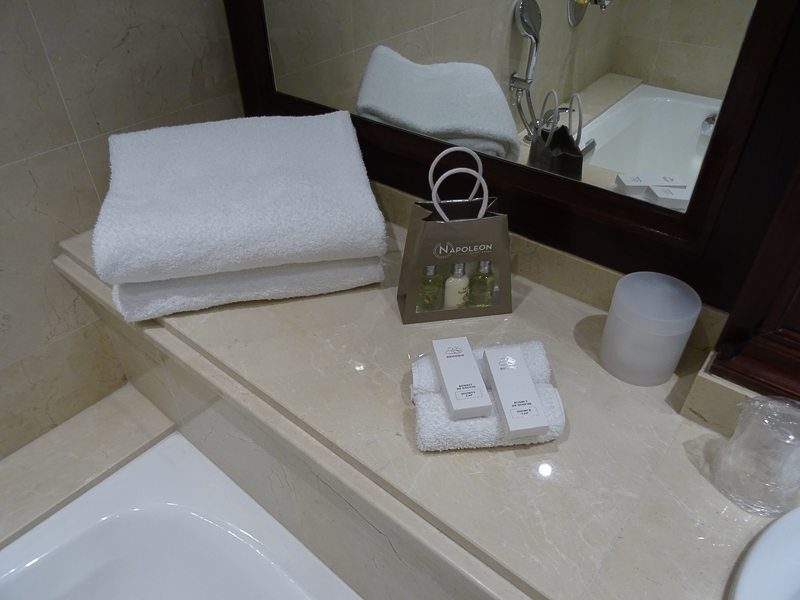 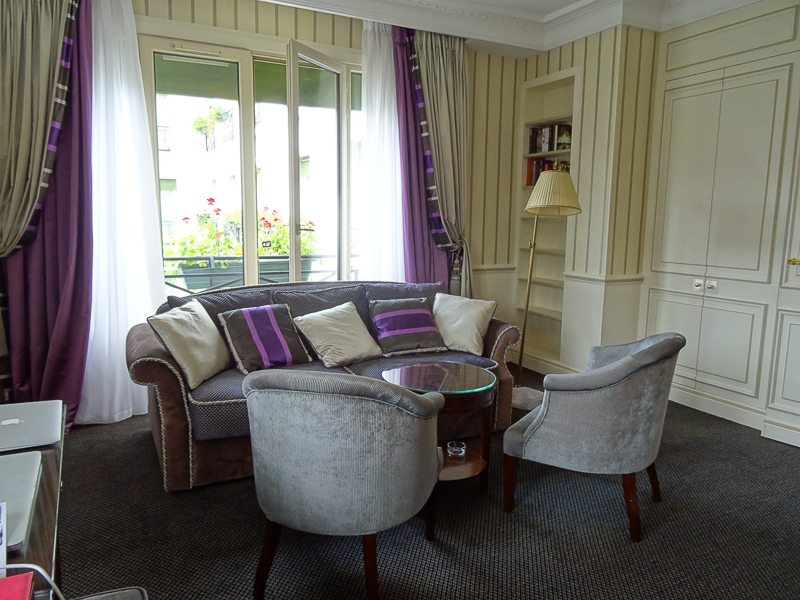 The Influence of Napoleon on the Hotel Napoleon Paris

The Parisian Bivouac Cafe has beautiful frescoes of Napoleon’s military campaigns adorning the walls. The woodwork, lighting and warmth from the fireplace and the rich and elegant colours and furnishings allow you to relax and reflect on Paris as it is meant to be. Of course dining in such surroundings is very pleasurable.

The hotel is filled with French history throughout all areas including the stairwells and are a testament to the Napoleonic history and the history of Paris itself. 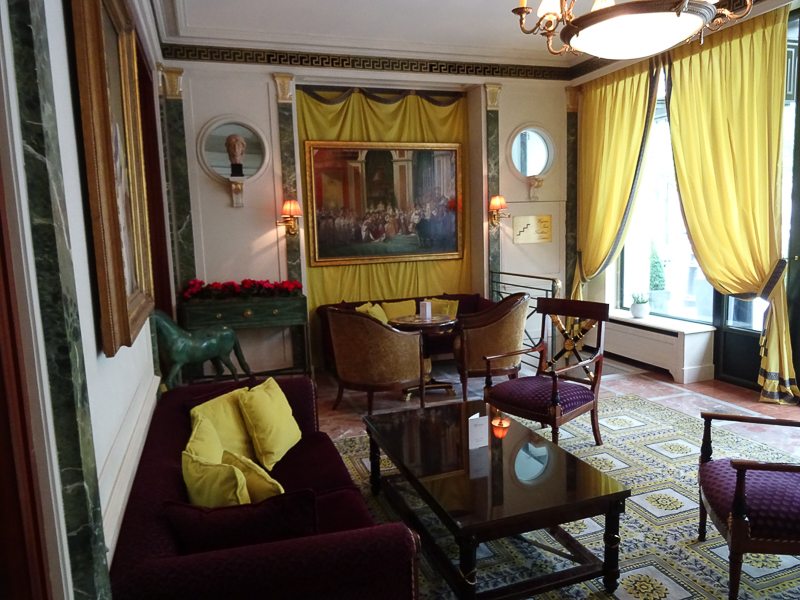 We were very impressed with the staff and their total efficiency, and friendliness. We had arrived a little earlier than book-in time, and the man on reception sent us through to the Bivouac Cafe for coffee and chocolates on the house. Though we ask for nothing, we were very impressed at breakfast and throughout our stay and the comfortable and attentive efficiency. 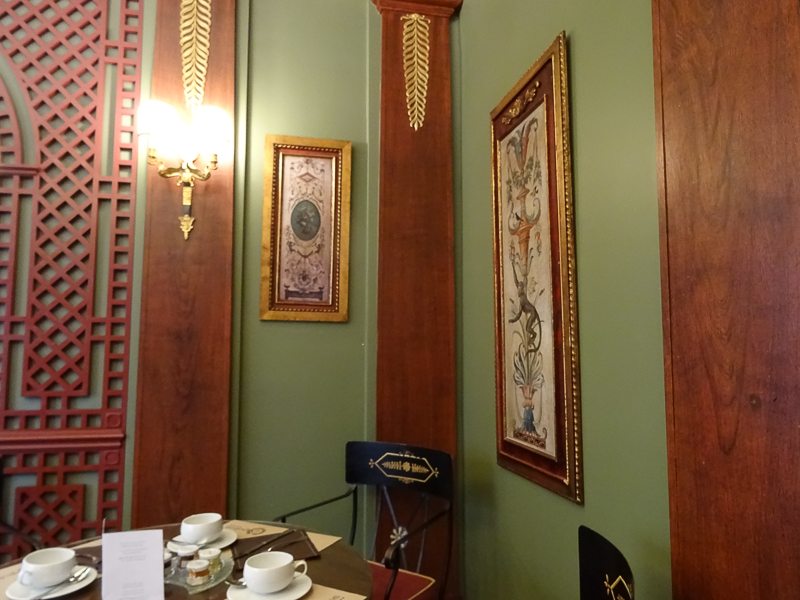 The Hotel Napoleon Paris is based on a love story. It is a beautiful love story and the fact that the family still owns the hotel is a testament to this. The location is lovely, and the hotel is old world charm with modern conveniences. What more could one want in the city of love? 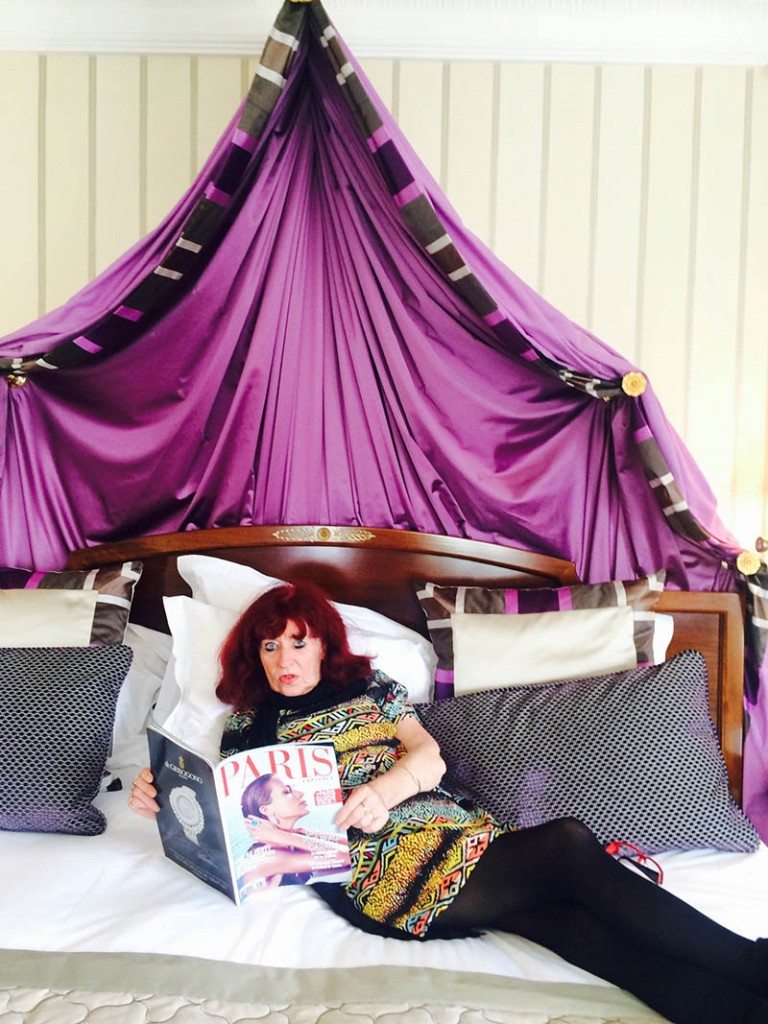 See Paris Tourism for all details of how to explore this amazing city.