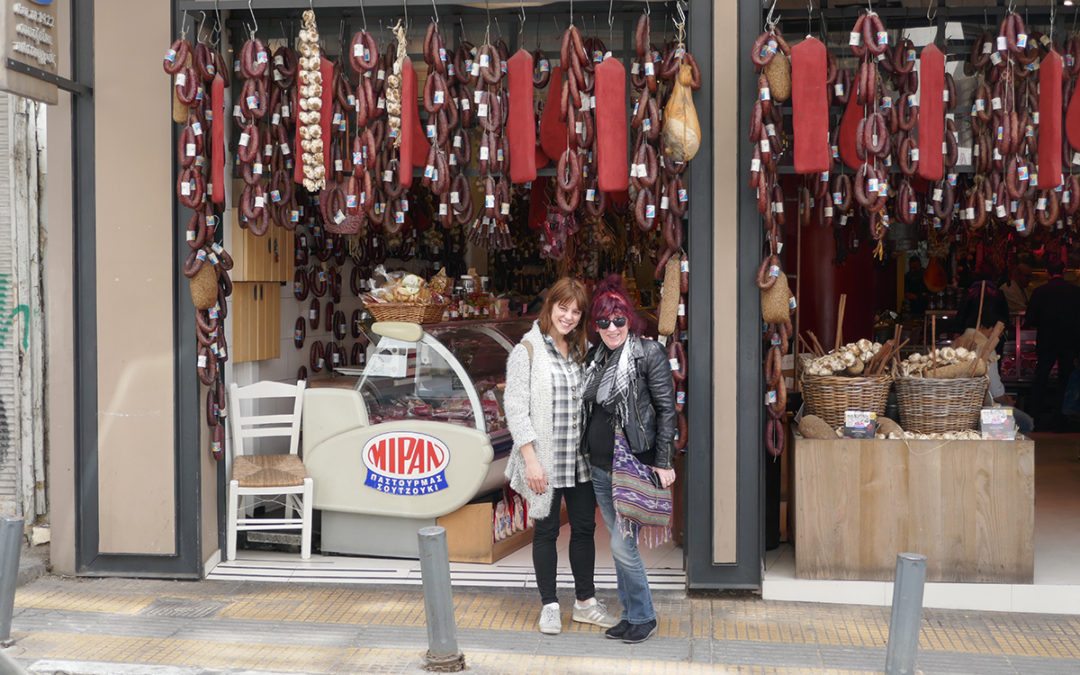 One of the best things you can do when you visit the capital city of Greece is to do a Food Walking Tour of Athens with a local guide. Not only will you discover the culinary delights of the city of Athens, but you will learn about what is like to live in this ancient and modern metropolis from someone who knows. Getting from the airport into Athens is easy, so when you arrive it will be easy to pick up a food walking tour. Make sure to see the ancient sites of Athens as well as enjoy everything about this amazing city.

Our guide was a young Athenian girl name Eirini, from Athens Walks Tour Company.  We were not aware beforehand, but we had nine stops in our amazing 4 hours with her on the Gourmet Walking Tour of Athens, which is tour is bookable on TripAdvisor. The way we could track where we had been was by using the Travel Timeline by Tripadvisor app, which we had also been using during our long walks in Saigon, Hoi An and Hanoi in Vietnam. More about this app later.

We met Eirini at the designated spot, near the old church in the bustling Monastiraki Square, which is where you find fruit vendors and the enormous flea market. 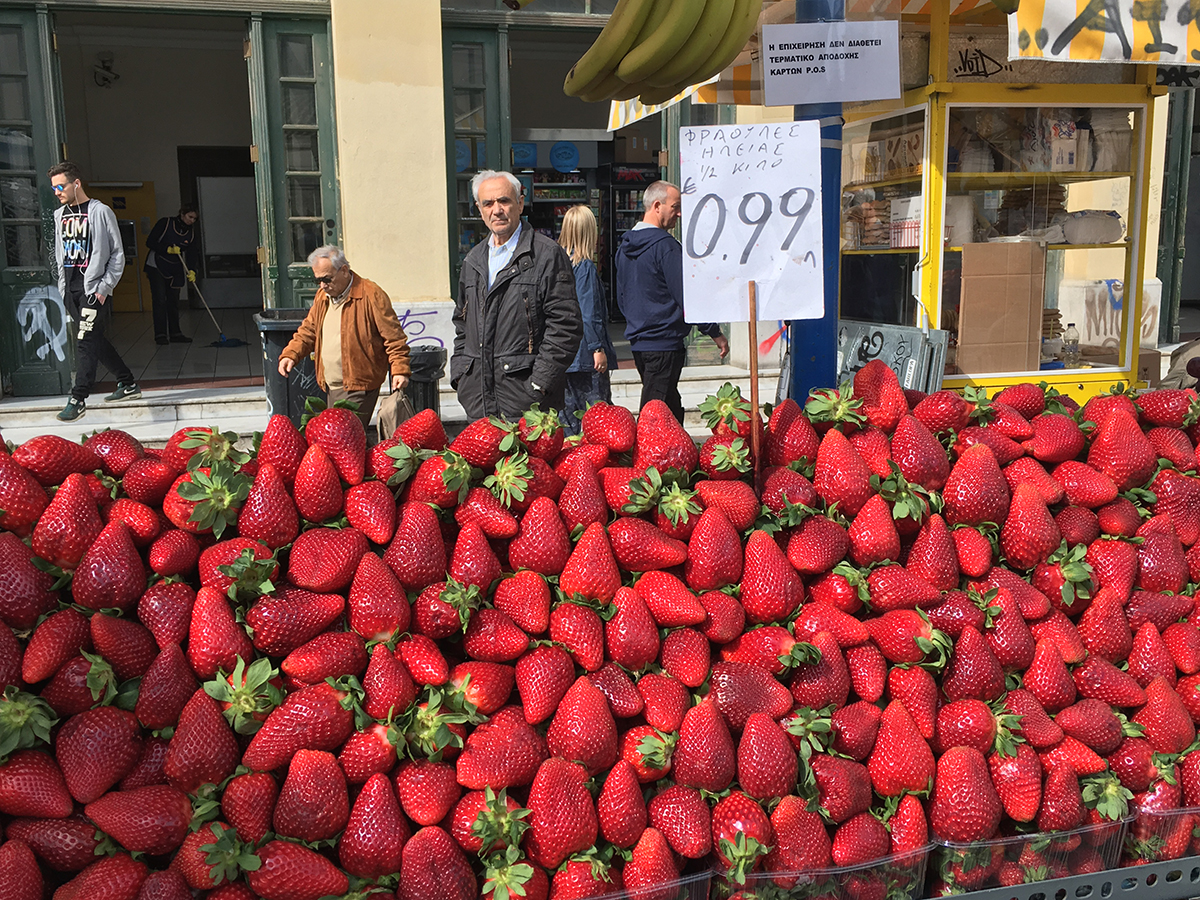 We walked to our first stop Meliartos to try some quintessential Greek food, Tiropita, Spanakopita, and Bougasta. As we savored the delights of these dishes, we talked with Eirini. She told us that these dishes were all about how good the filo pastry was. She told us that as she and her mother both work, but her grandmother would make their filo and leave it in their fridge for them. If you have ever worked with filo, you will know that it is time-consuming and delicate in coating each layer of the pastry with oil or butter and that it is an art form. We also learned that the type of feta cheese was also very important – 60% goats cheese is the key. 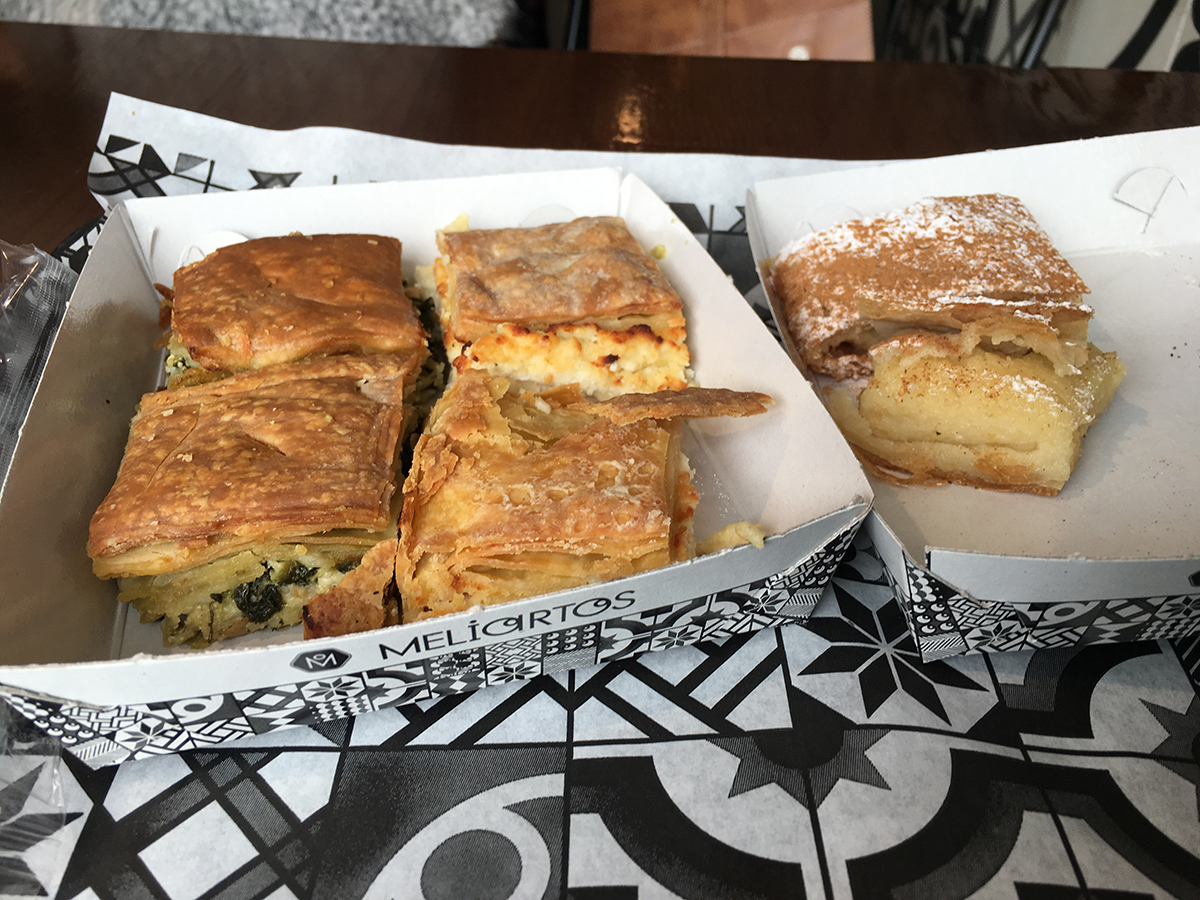 Trying the Street Food of Koulouri

We then went outside to one of the many, many vendors in Athens who sell this street food of Koulouri, a plain, circular bread topped with sesame seeds. This is This street food or more correctly breakfast food. This was initially made for served to the slaves to sustain them while working because it was cheap. 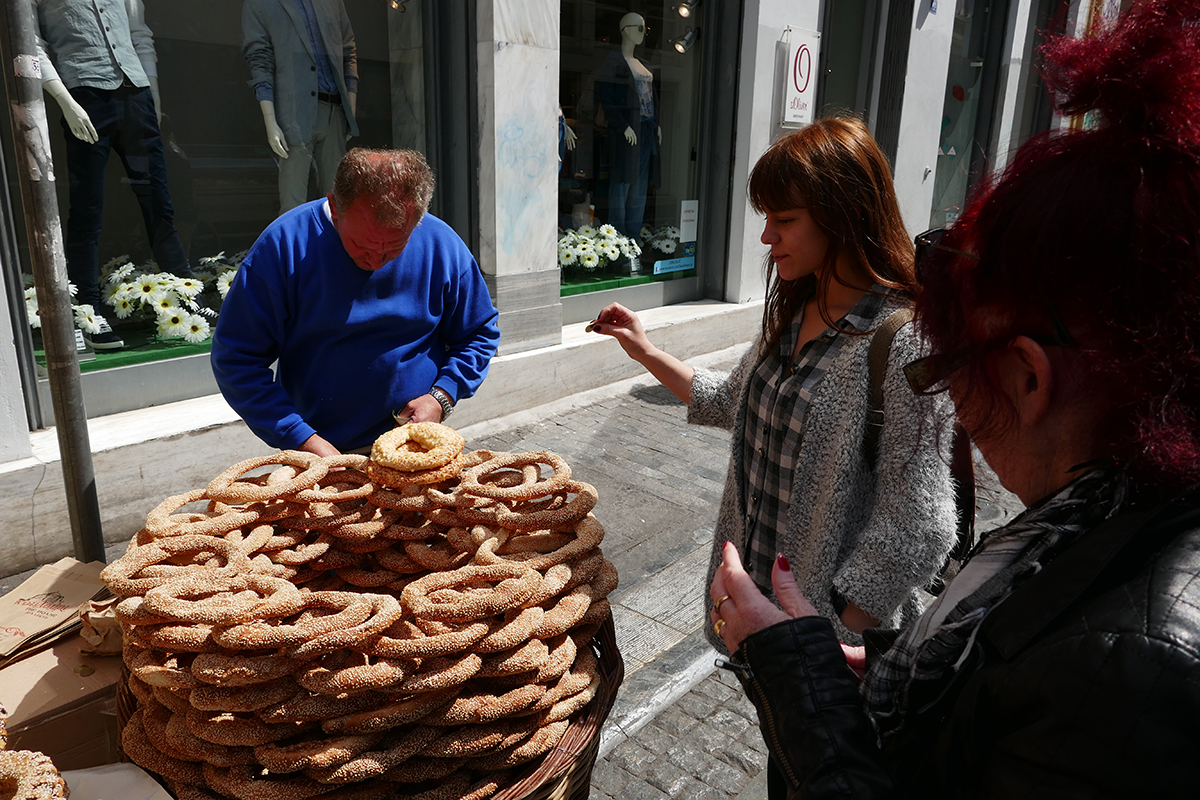 We headed to the famous café of Kpivos, where a plate laden with Loukoumades waited for us. Again, while we ate we talked about living in Athens. 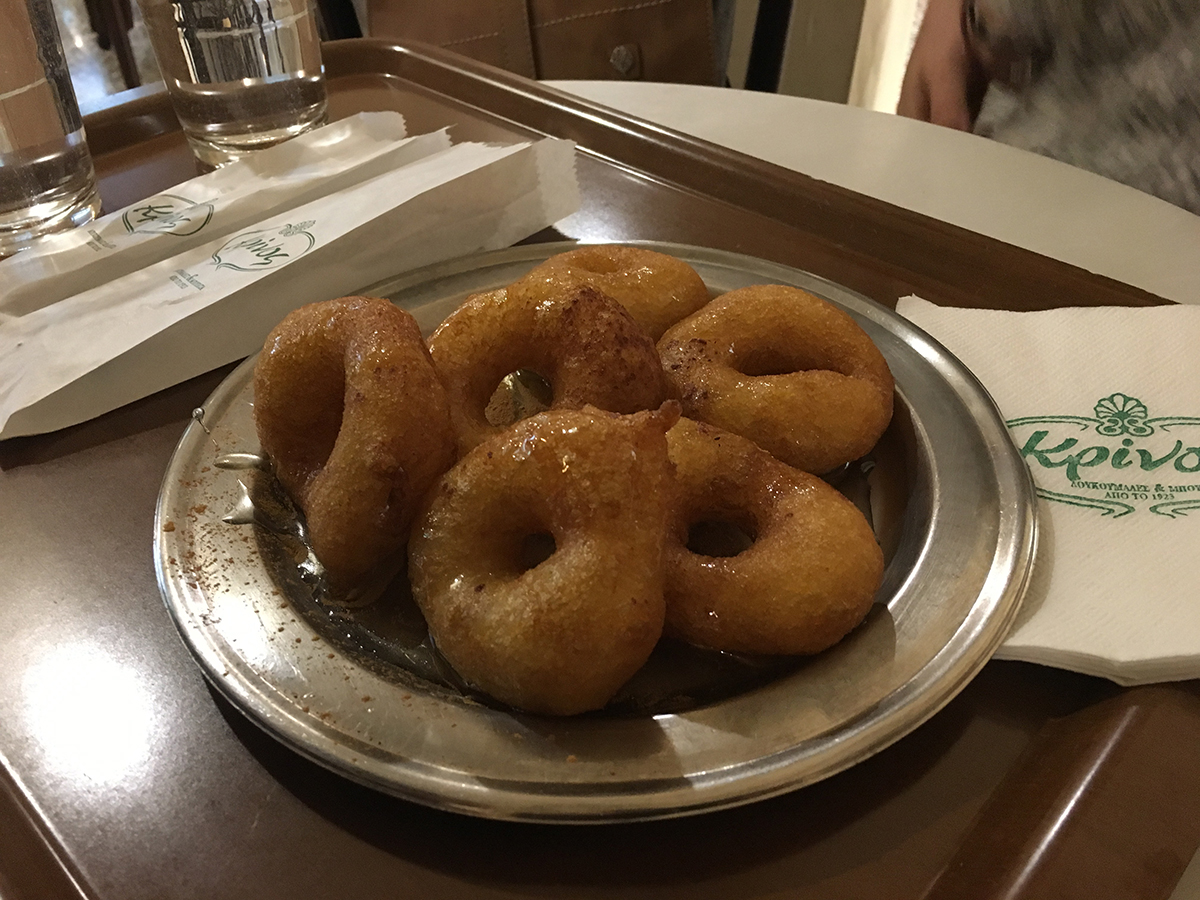 Our next stop was to the wet markets of the Varvakeios Agora the Athens Markets, where everyone does their shopping. This bustling marketplace was full of fresh meat, fish, vegetable spices and anything you could want. I liked the easy rapport that young Eirini had with the stall holders and the very pleasant way they interacted with all their customers.

While busy, it was much as the agora must have been in ancient times; a place to meet, talk and come up with ideas. Many incredible ideas came from the Agora of ancient times, including democracy. Eirini shared another of her family’s sayings, “an apple a day, you die anyway.” You have got to hand it to the Greeks for nailing quite fatalistically life’s challenges. We have many Greek friends in Australia, and we always know that the Greek tragedy is part and parcel of life. 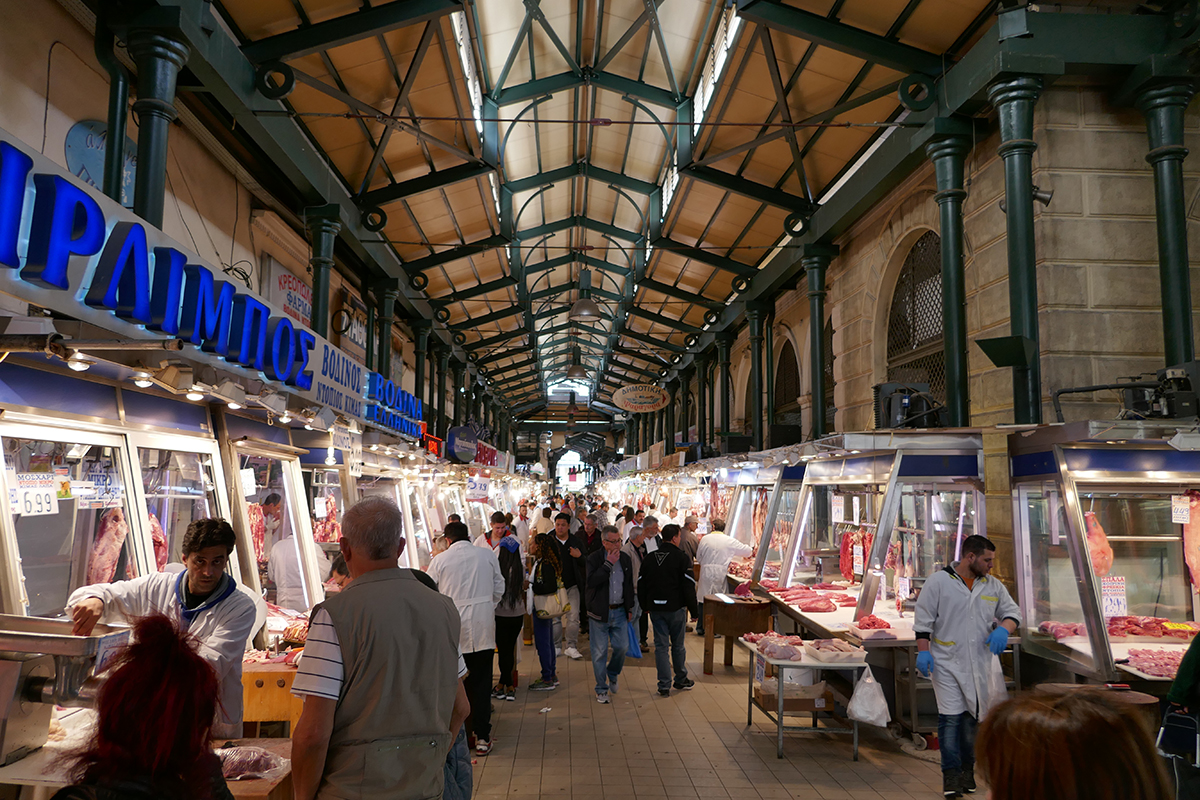 We headed next to Mokka for a bespoke Greek Coffee. The joy was in watching it being prepared by the very Greek barista. The coffee was prepped and then placed in the pre-heated sand to make its way to completion. The beauty of Mokka was that there were so many locals sitting discussing the financial woes of Greece, which is a perennially favorite topic with young and old, all over Greece, and where we had already heard a lot for Nick the Greek in Corfu, and it continued to our last island in Santorini.
Address: Athinas 44 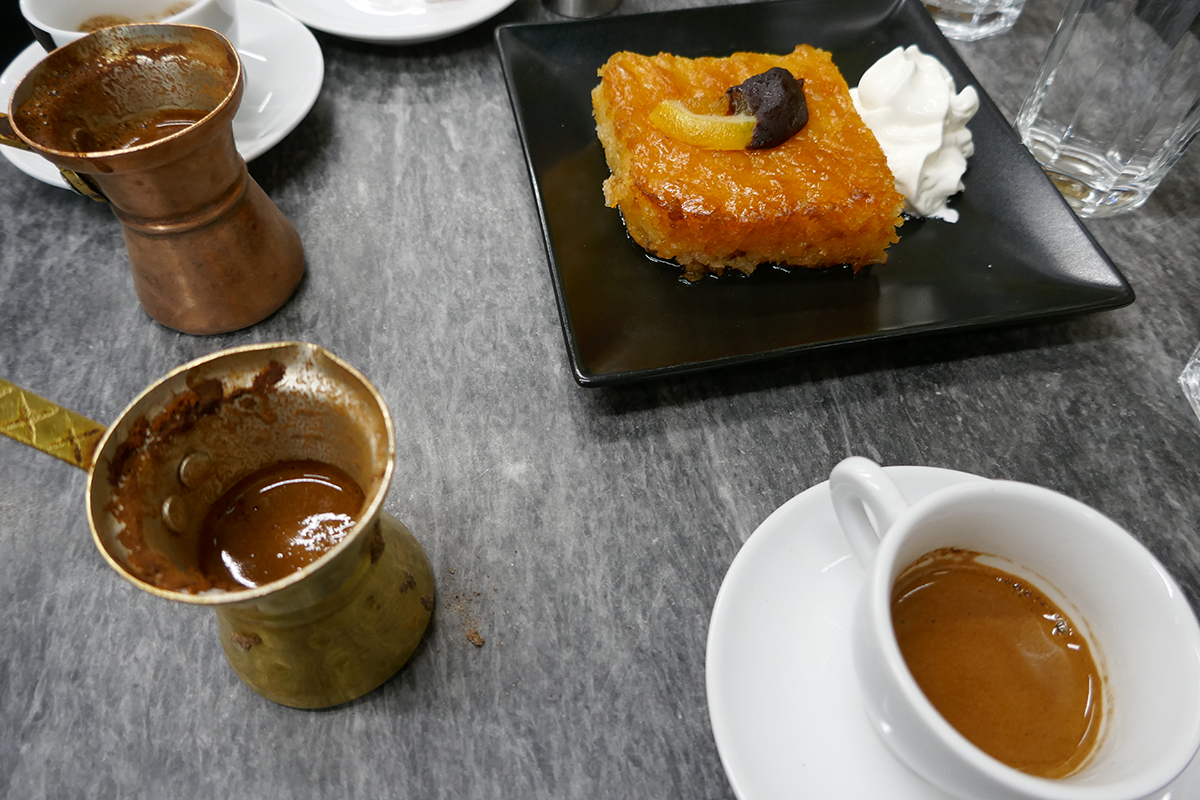 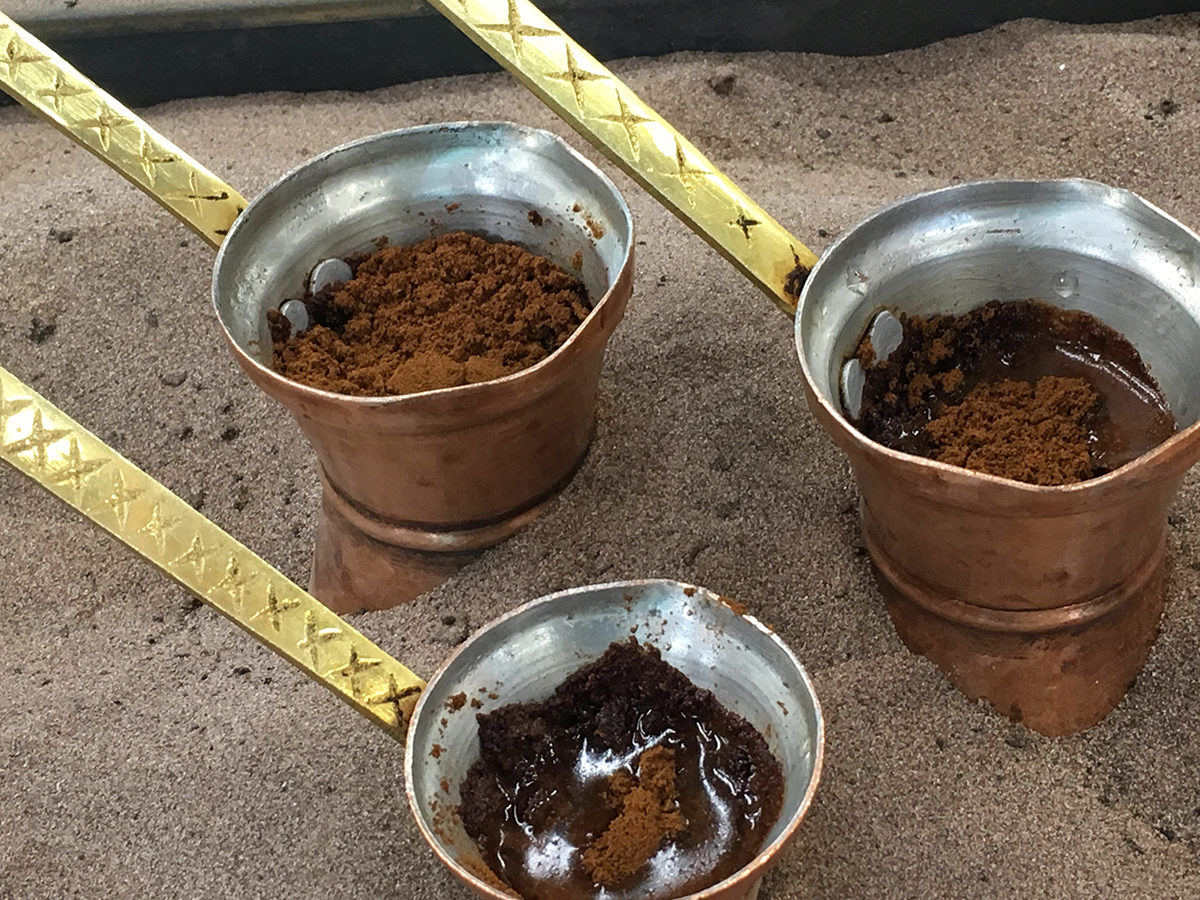 The Fruit and Vegetable Markets in Varvakeios Agora

Market day shopping is a ritual, and Eirini was there to select the freshest tomatoes for our Greek Salad that we would be having along the way. I don’t know, but the food was incredibly lush and fresh, as in not imported fresh. 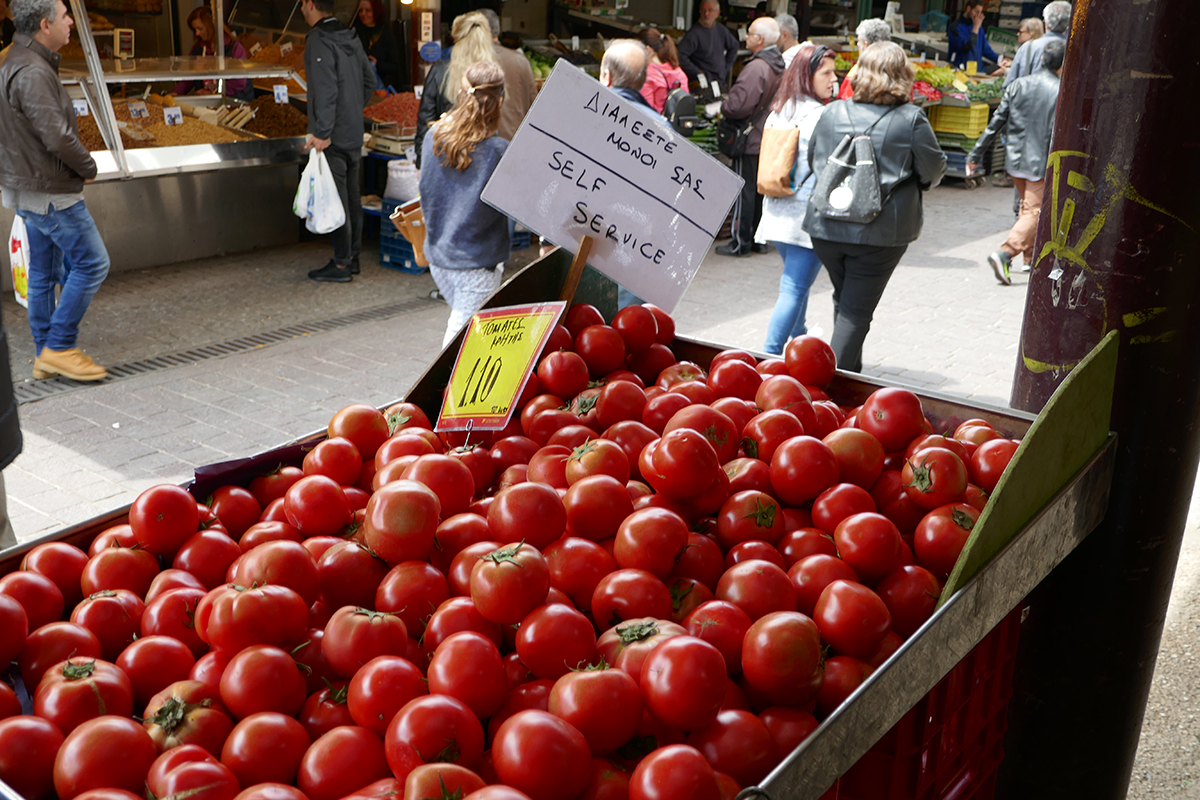 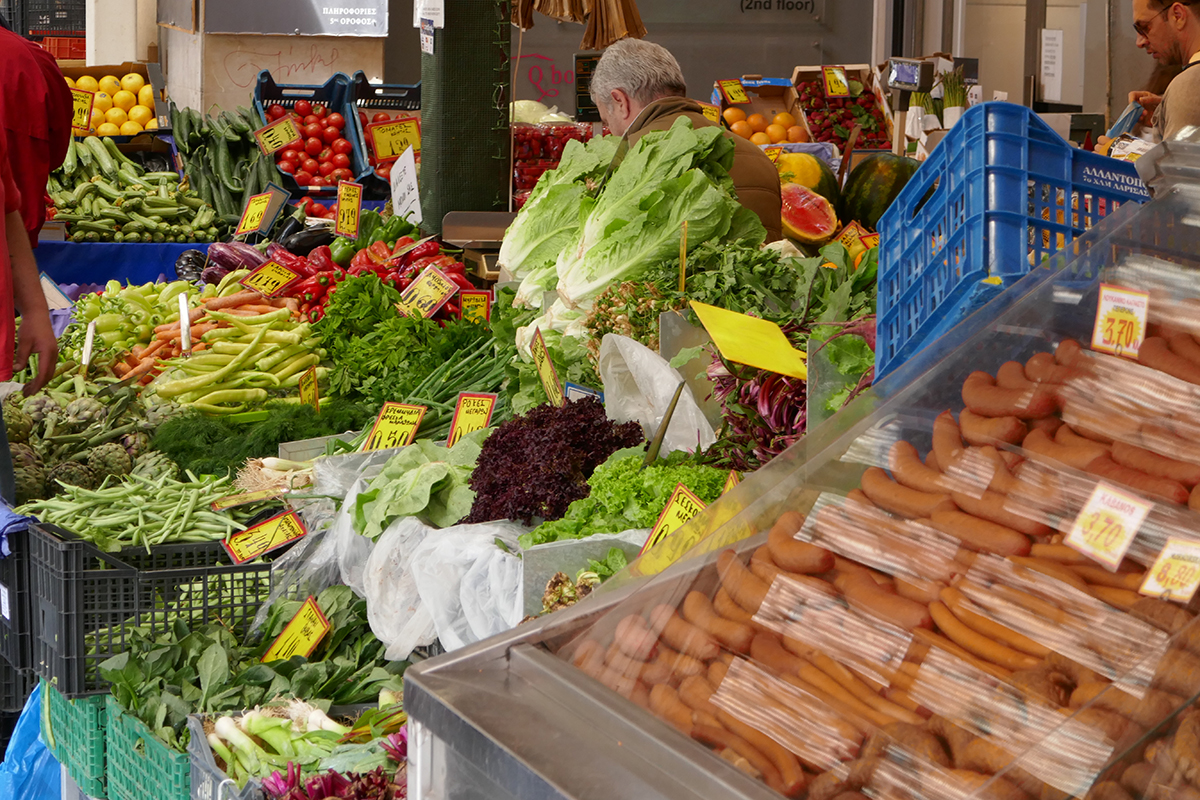 Feasting at a Specialty Grocery shop in Athens

We then wandered through a district that Eirini to a specialty grocery shop, in a district which is home to many immigrants of the city of Athens. Within this neighborhood was a deli that focuses on local produce from many of the different parts of Greece that are not as easy to get in the markets.

Here we were literally wined and dined and had a Greek Salad, hand made by Eirini. Did you know that truffles are common in Greece and not the rarity that they are throughout many other countries including our own. The truffle spray that Eirini added to our oil was a definite decadence. We tried two digestives which were to die for. Then we tasted raw honey and traditional Greek yogurt.

If you think we were getting full, you would be correct, but we were having such an enjoyable day with Eirini. 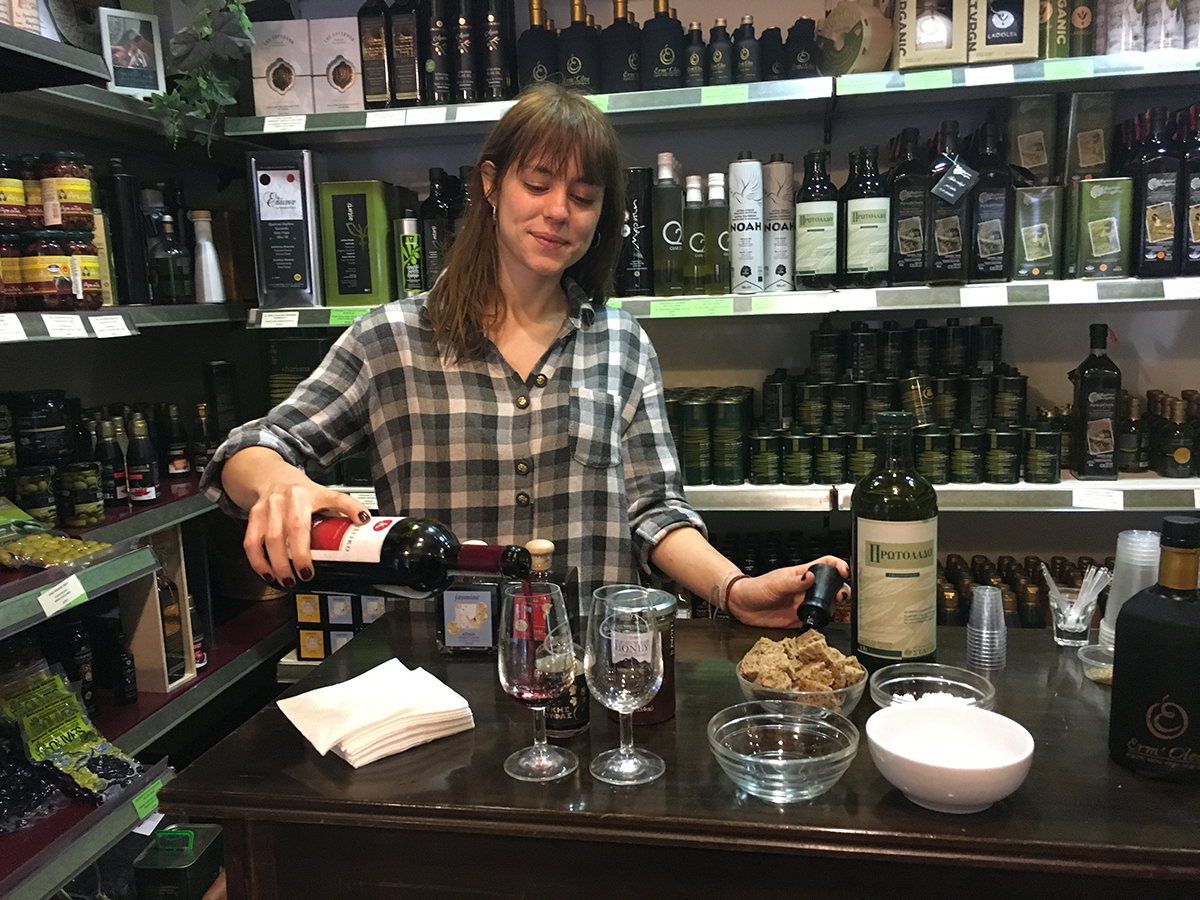 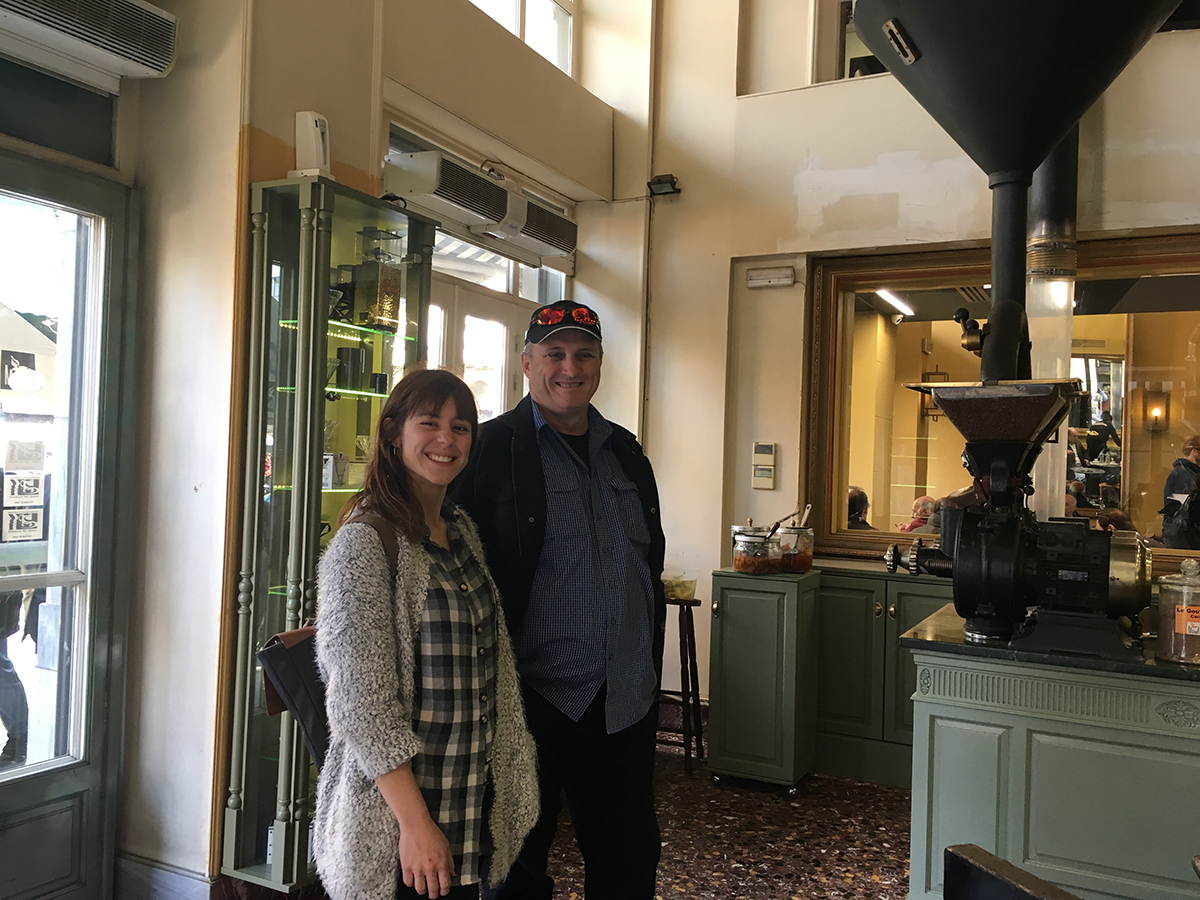 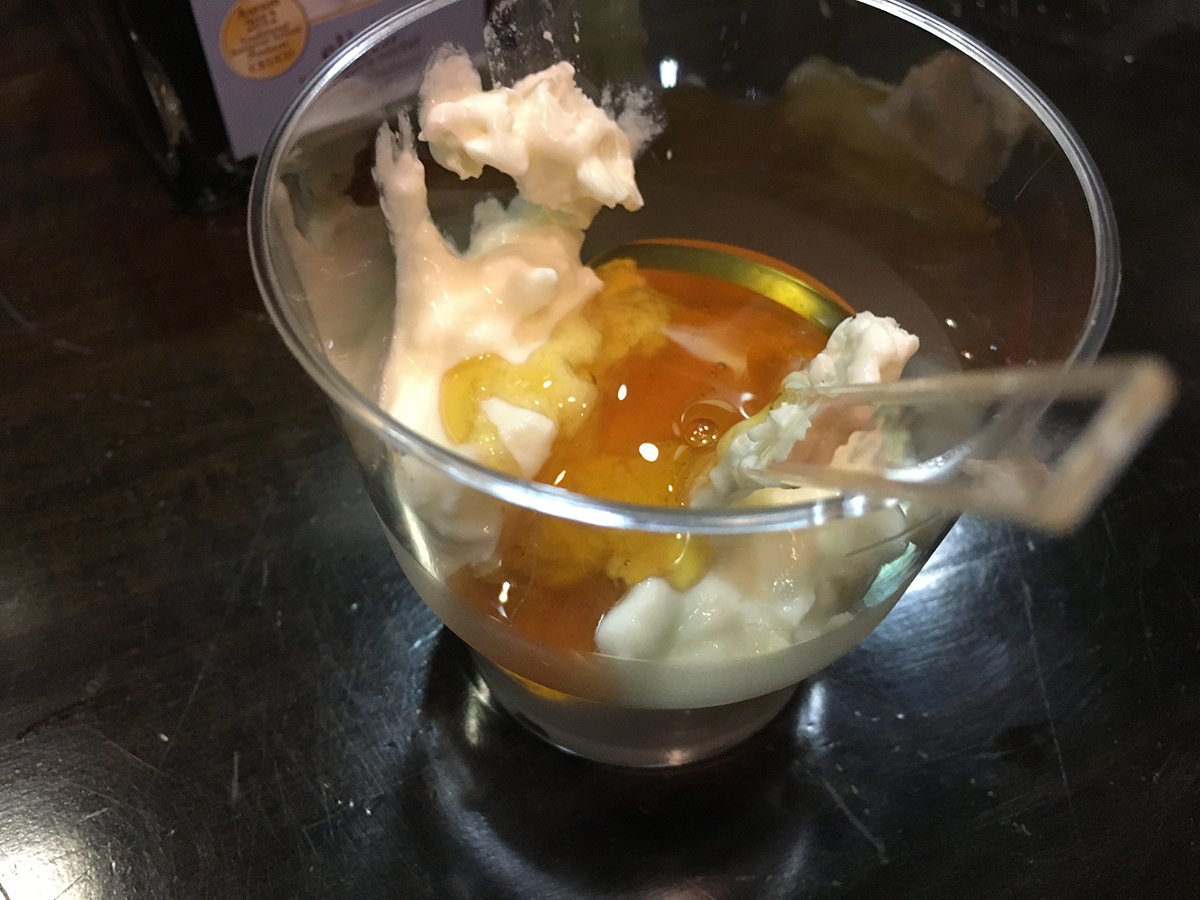 Loving the Armenian Deli in Athens

Apparently, this Armenian owned Deli called Miran is an institution in Athens. Judging by some people in there, it would appear to be correct. We sampled some of their goods, like Pastoumi, which was originally made from camel meat, but ours wasn’t. We also had dolmades. Metsovone cheese, graviera from Mutilini, and on it went. 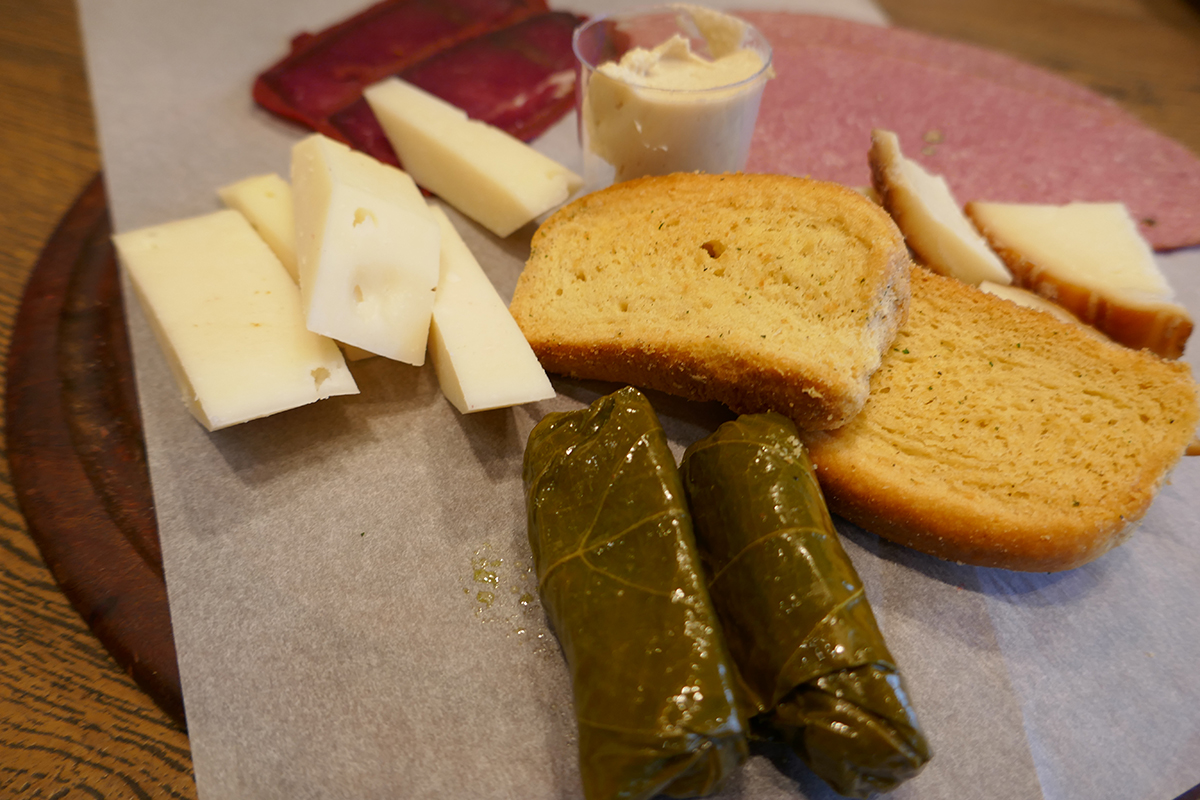 Athens is graffiti ridden, and this is by no means an attempt at street art. In my humble opinion, this grunge factor makes Athens very appealing. It is one of those cities that resonated with me. Eirini showed us where she and her friends went out to drink, and one of her favorite streets, Pittaris. 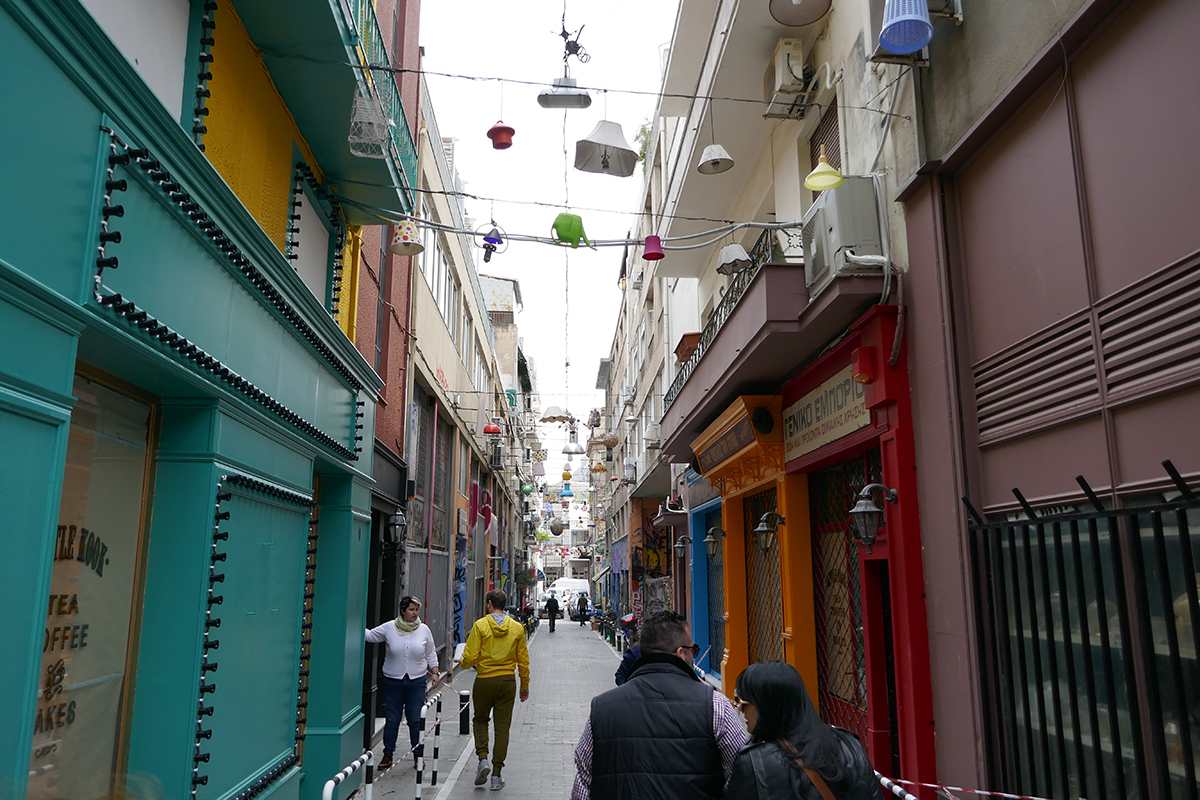 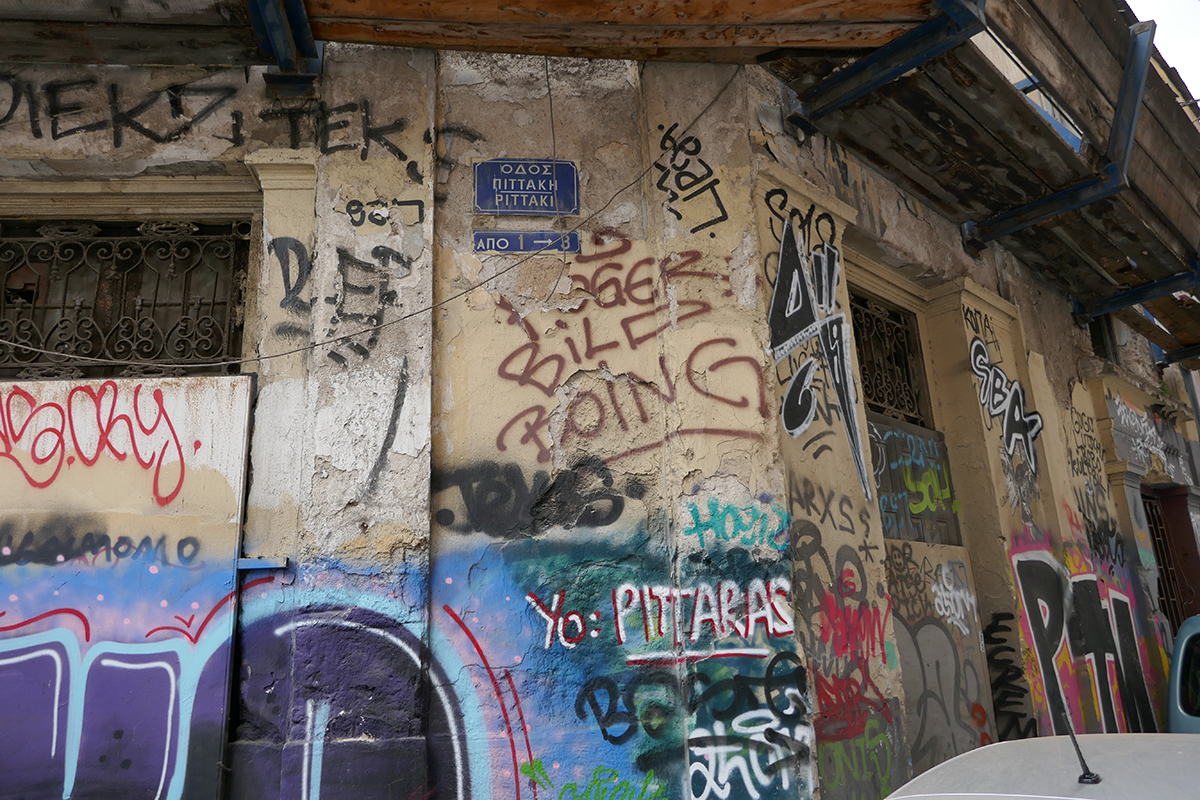 Athens is grungy in a good way

Got to have a Gyro at Sabbas Restaurant

I would have thought that our day was over, but we ended up in a queue with many other Athenians to have a traditional gyros. Much like a kebab, though some say a little different, it was a pleasant way to end the day with Eirini. 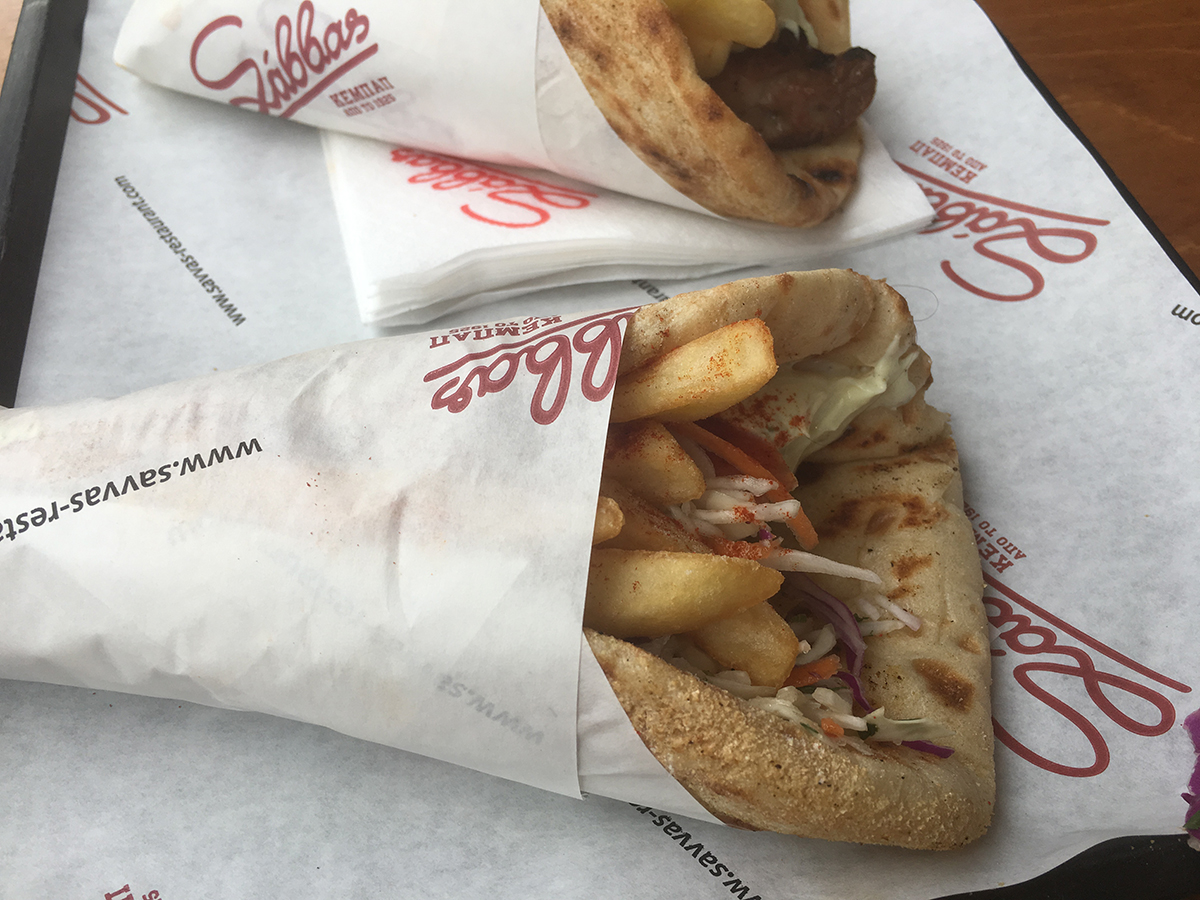 gyros is a popular dish in Athens

How did we know where we were?

We have been using a great little app on TripAdvisor called Travel Timeline. This mobile app helped us to track where we were and what we did on our Gourmet Walking Tour of Athens.   We activated the app when we were in Vietnam recently, and the feature automatically created a timeline of the places, which we had visited and the photos that we took at each location, and then we could see our route on a map. We like that it can be used without an Internet connection, helping us avoid data and roaming charges. Our timeline and photos remain private, unless we choose to share them, with readers, family and friends.Very cool that we have a visual diary and a map of where we have been. 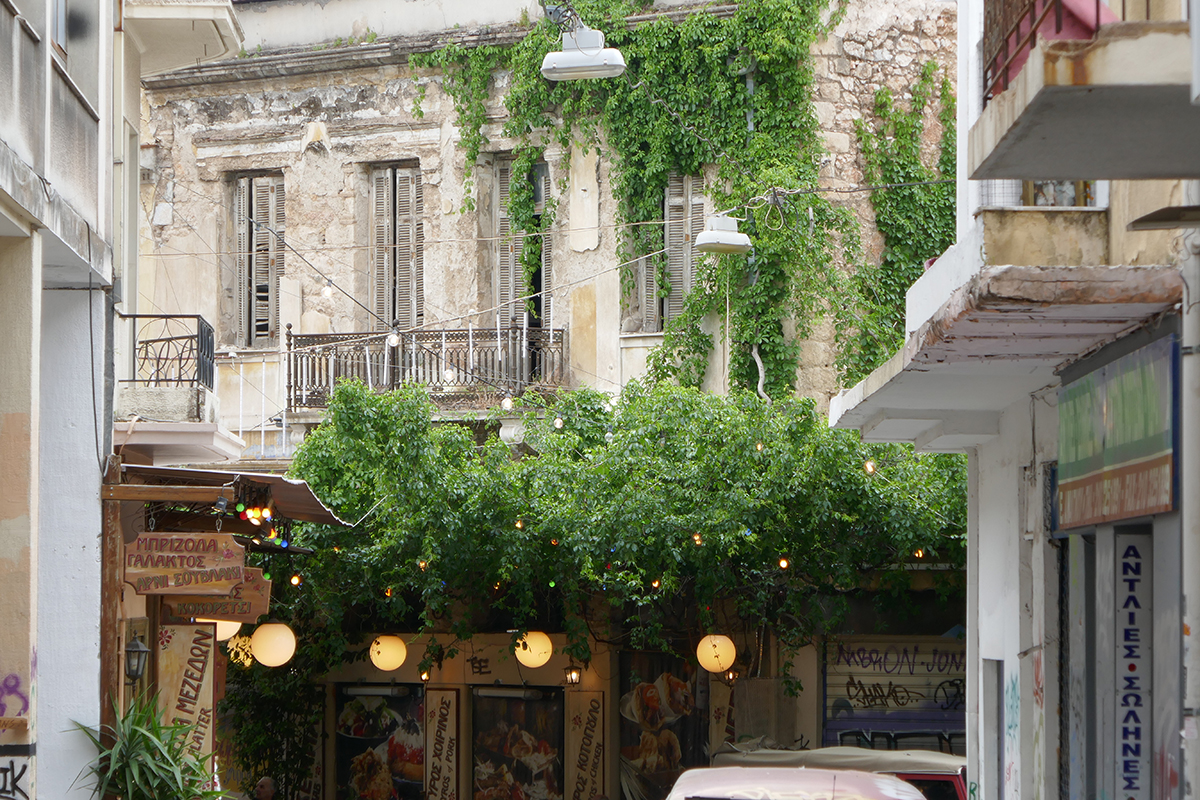 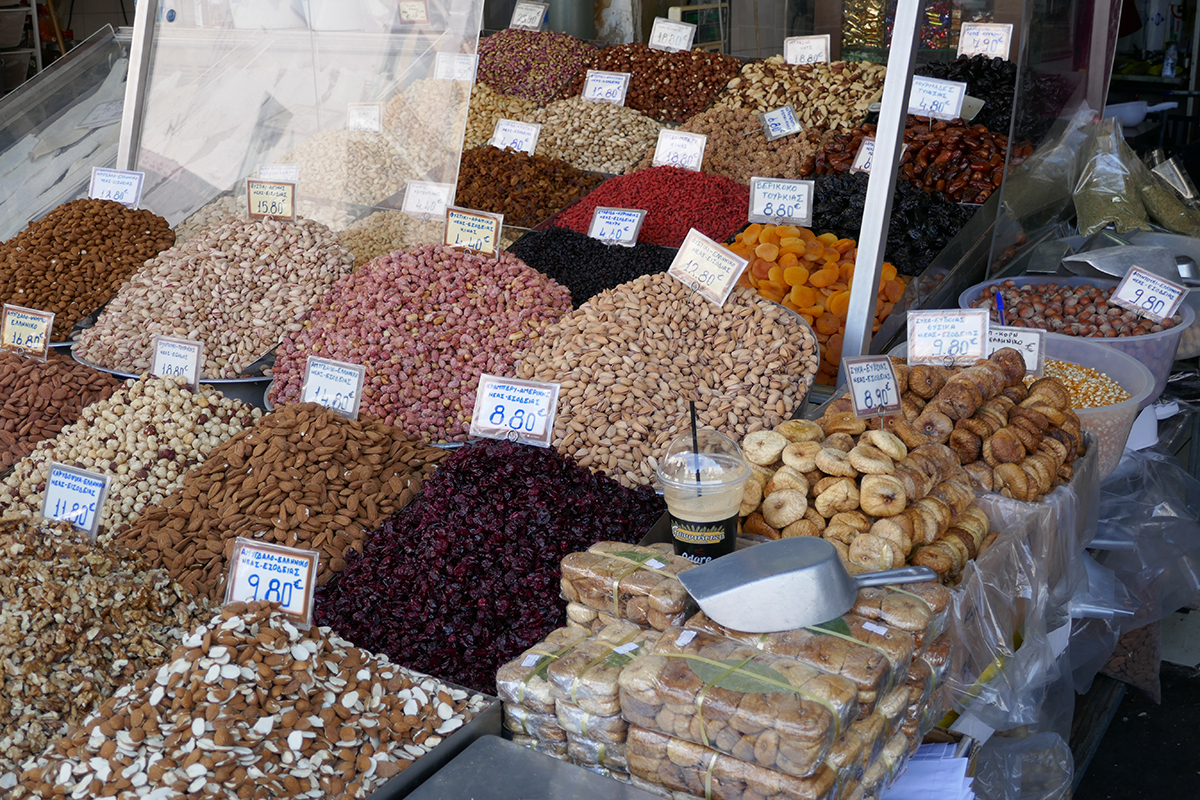 To say that our doing the Food Walking Tour of Athens with a local was a highlight of our time in Athens and indeed Greece would be an understatement. We will be back to explore more of this city, and will select Trip Advisor for our next experiences in this amazing city. Read more about the different tours on offer, you will be surprised by the variety and the cost.