Graduating from the Paella Academy in Valencia, Spain 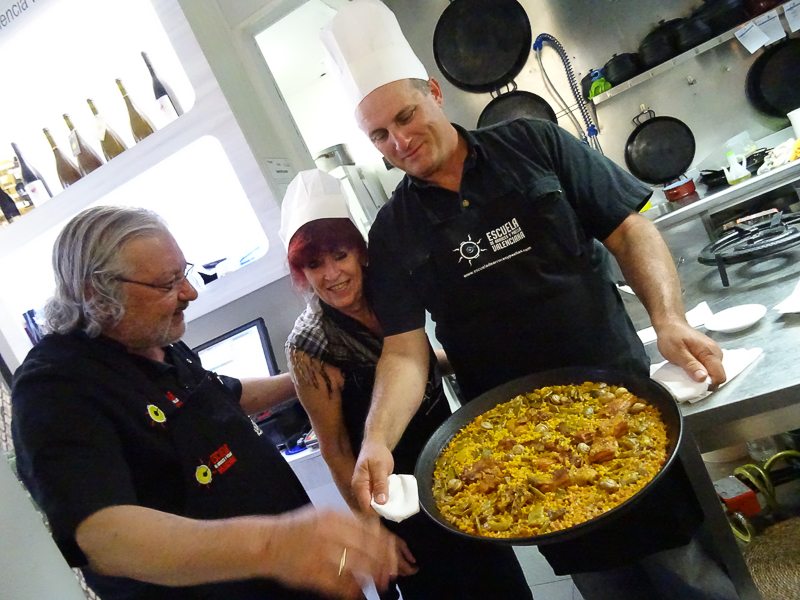 Who would have thought that we would be graduating from the Paella Academy in Valencia, Spain.
Valencia’s main economic resource is rice. Its principal food is paella. Paella is the most popular dish in Valencia and as such there is a lot of discussion about what makes good paella, who makes good paella, and who has the best techniques for making the ultimate paella. To be quite honest, I struggled with saying the word, as my Spanish is very poor as in non-existent. Paella is pronounced WITHOUT the ‘ll’, so it sounds like pay-a-yah. 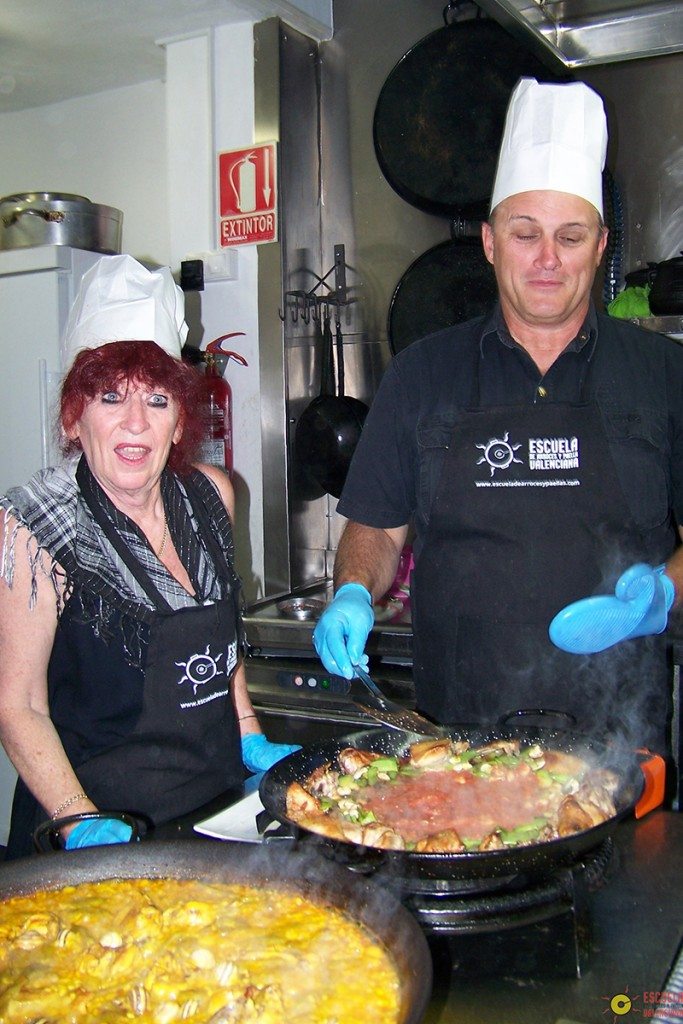 Now that this is sorted, Gordon and I Graduated from the Paella Academy, Escuela de Arroces y Paella Valencian with a Diploma after completing a gruelling course in making Valencia’s signature dish…paella. One of the things that we enjoy doing when we travel is to get involved in a local experience and to get our Diploma in making Paella sounded like a really interesting experience.

About the Diploma Course in Paella, Valencia Spain

http://escueladearrocesypaellas.com/en/ >All details are here

Starting our Graduate Course in Paella

The chef, Mr. Cross, yes I laughed too, is exactly what a master chef should look like. We were 10 minutes late having been on a walking tour with Valencia Tourism, and he was sitting outside of the school/restaurant looking a little annoyed. However, as he was smoking a cigarette and drinking beer, I thought that this was an optimistic sign… that we could make amends.

Chef Cross doesn’t speak English, but our walking guide did our apologies for us, he looked us up and down, and then we kissed and were besties after that. That is the way with the people of Valencia; they are super friendly and like kissing, as do I. 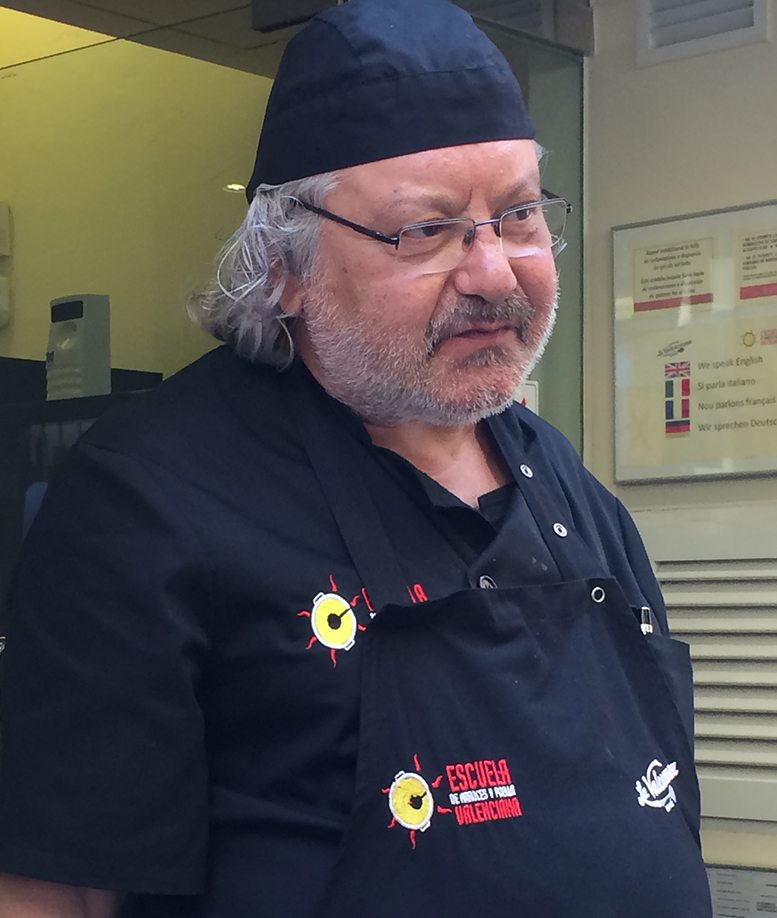 It was into the kitchen and our aprons, hats, and gloves. This was the worst time of day for us to do our Diploma in Paella as the kitchen was on full service for lunch, which in Spain is 3pm. The other four chefs in the kitchen were manically getting out beautiful dish after beautiful dish for the customers while we were receiving our 1st instructions. Because of the language barrier, one of the waiters was our interpreter.

The first step was an introduction to the paella pan and the paella burner, a double ringed burner where both rings come into play at various times in the very careful process.

Next, I put olive oil in the pan to the gesticulations by Chef Cross of more, more, more until it covered the base.

Next he showed us how to do the beans – 3 types.

TIP: Rip the beans; do not cut them, as this does not allow the oil to get into the paella

TIP: Turn every five minutes of so until nice and brown. Push the chicken to the sides of the pan

TIP: push the rabbit to the sides of the pan

Put the rest of the beans into the middle and flip continuously to cook evenly. 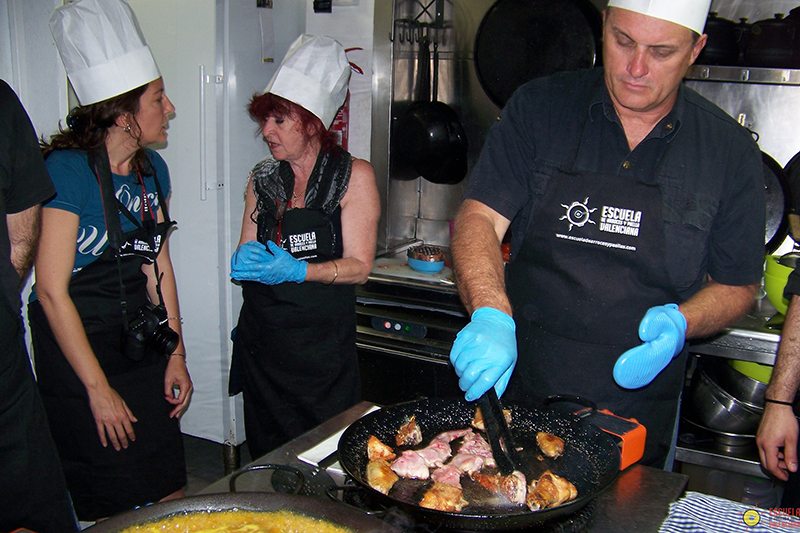 TIP: When the purple on the beans is no longer visible then push to the sides. In effect, you are creating an outer circle of the cooked ingredients.

TIP: Flip continuously so that it reduces and then push to the side. 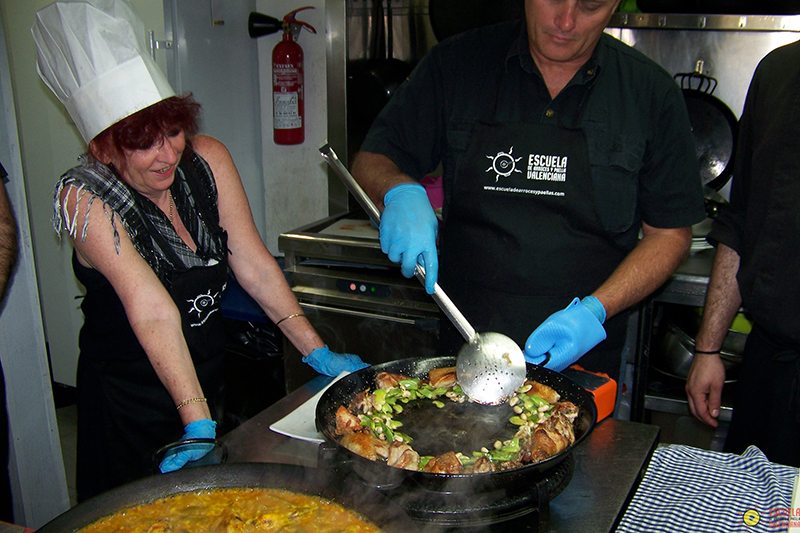 Add water to this.

TIP: Add water to 1 cm below the paella dish.

Throw in a sprig of rosemary

TIP: Now go away and talk to Chef Cross as the liquid reduces a lot. Have beer with him to keep him happy with you as students. Hope he says ‘perfecto’ to you during each of the processes.

Go back and take the rosemary out after 10 minutes and check your masterpiece.

Go away again as there is a lot of reducing to go. We were very fortunate as there was another group of students who had started their class before us. We were sat with them, and actually we had been talking to them in the kitchen when we got the chance. 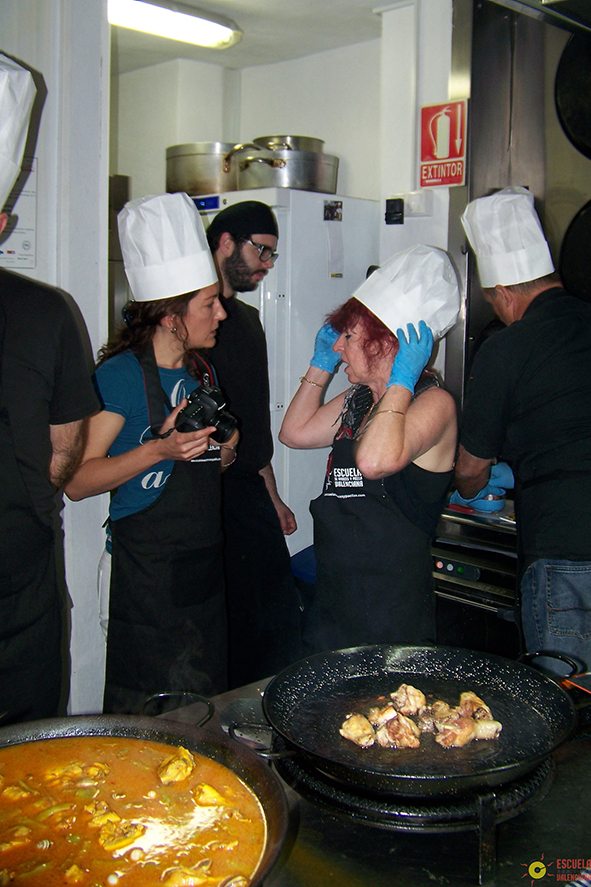 The staff bought out Spanish Omelets for us. So magnificent as we spoke to the three other people, all Spanish, who were totally lovely and made the day even more special. They then bought us out a bowl of mussels that are seriously the best mussels that I have had. As we students bonded together, and the wine flowed, it was time for our classmates to finish their paella. They had added too much salt, but the chef was still happy. 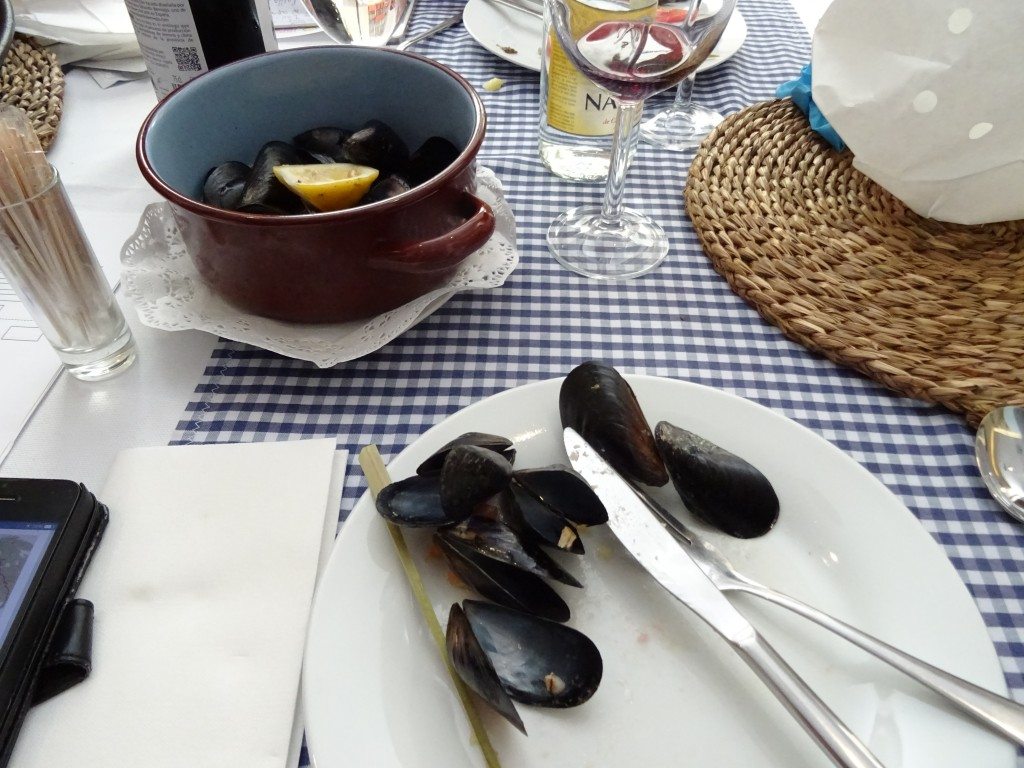 We then returned to the kitchen as ours was sufficiently reduced to add the critical ingredient – rice. This was Gordon’s job because after all it is traditionally the man’s job in Spain to make the ‘best’ paella; it is a testosterone kind of thing.

He made a path down the center of the paella and then evenly and slowly added to the all-important rice. It was then my turn to ever so gently distribute the rise over the pan. 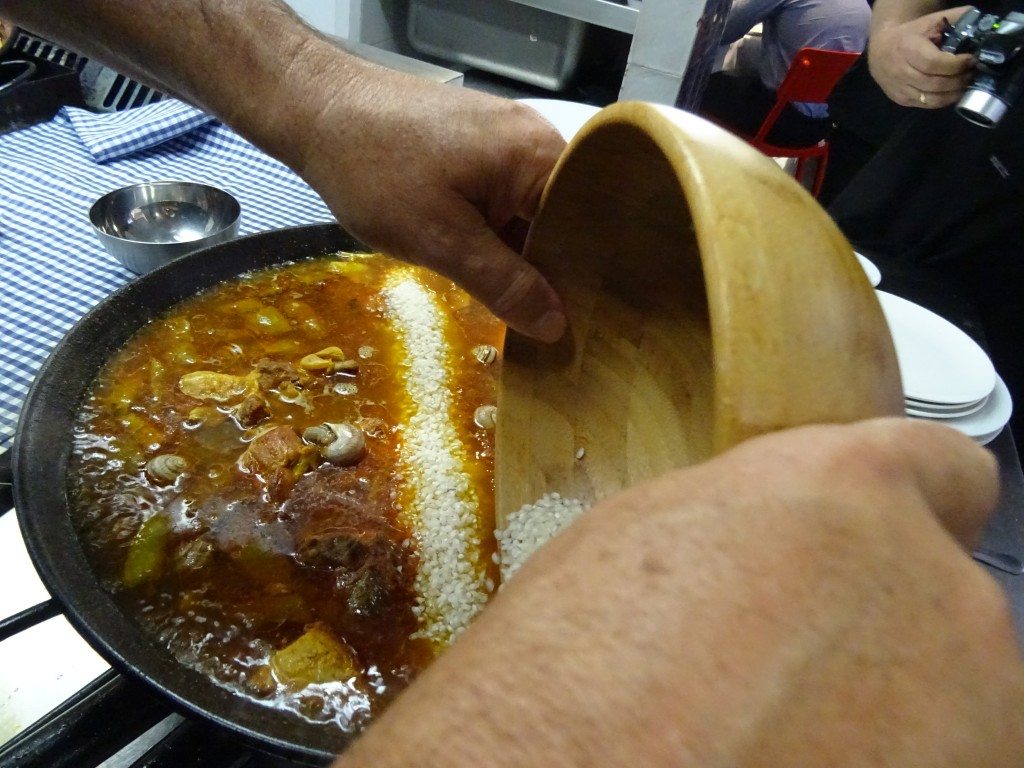 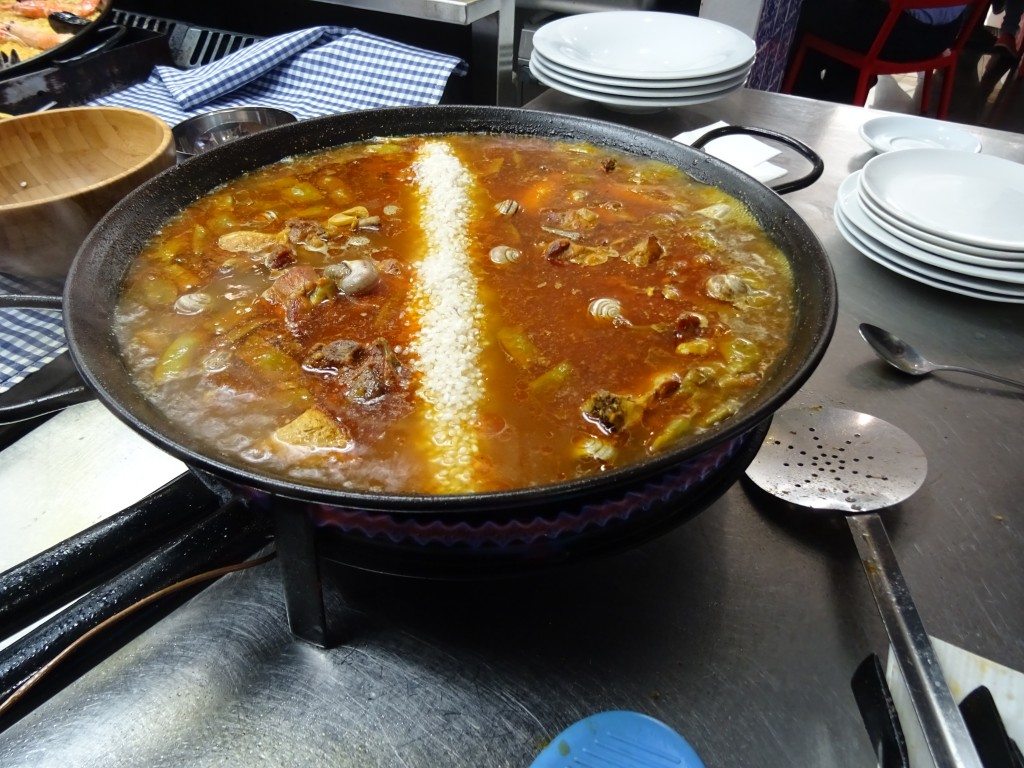 TIP: Paula and “ever so gently” got me a no from Paella Master Cross; apparently I do not have a gentle touch.

Back to the table our new best friends and then more food was brought to us. I was getting worried because I knew that the paella that we were cooking, we were to eat. 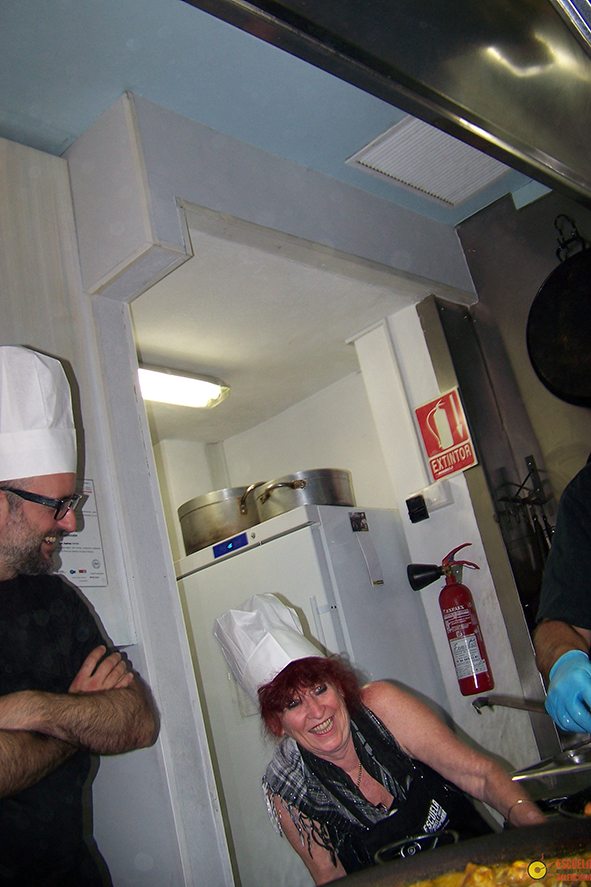 Next, we went and checked out our paella. As the waiter who was translating was working so hard feeding the full restaurant, one of the other students interpreted for us. We did the taste test and added a little more salt. Our friend gave us the nudge not to add any more salt as it would be like there’s, too salty.

We wafted to air towards us from the pan to see whether we had created the soccarat, the thin, crispy layer of toasted rice on the bottom. It smells like burning the paella, but Chef Cross wafted and said not yet, more burning. 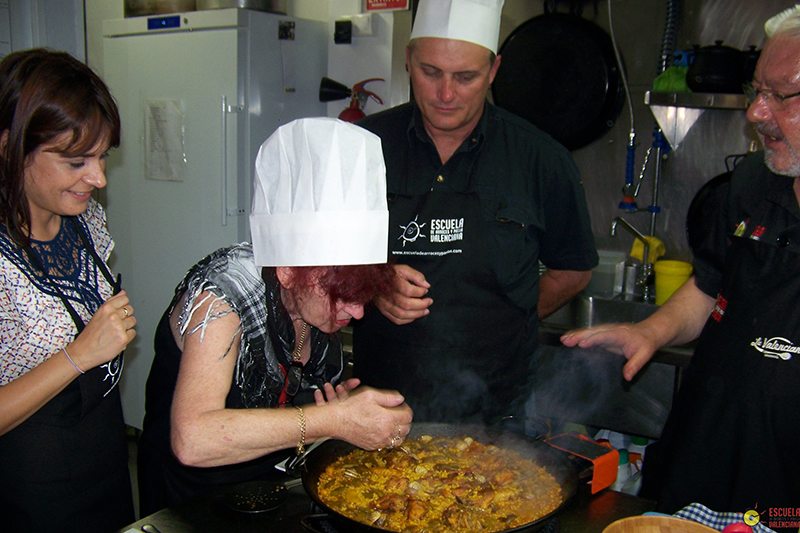 The litmus test of whether our paella was ready, was when you put a spoon in the middle, did it stand straight upright. 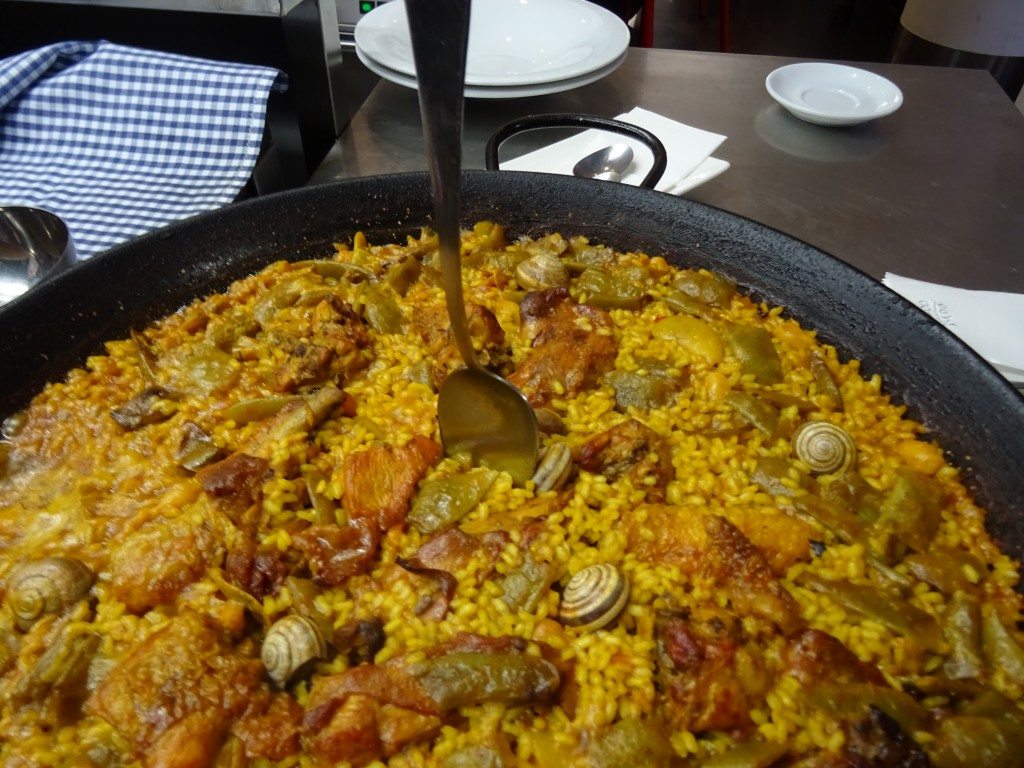 How did we go?

Chef Cross lifted our paella and turned it upside down. I though that he was dumping it on the floor and that we wouldn’t graduate and receive our Diplomas. But no, good paella will not fall out when upended. 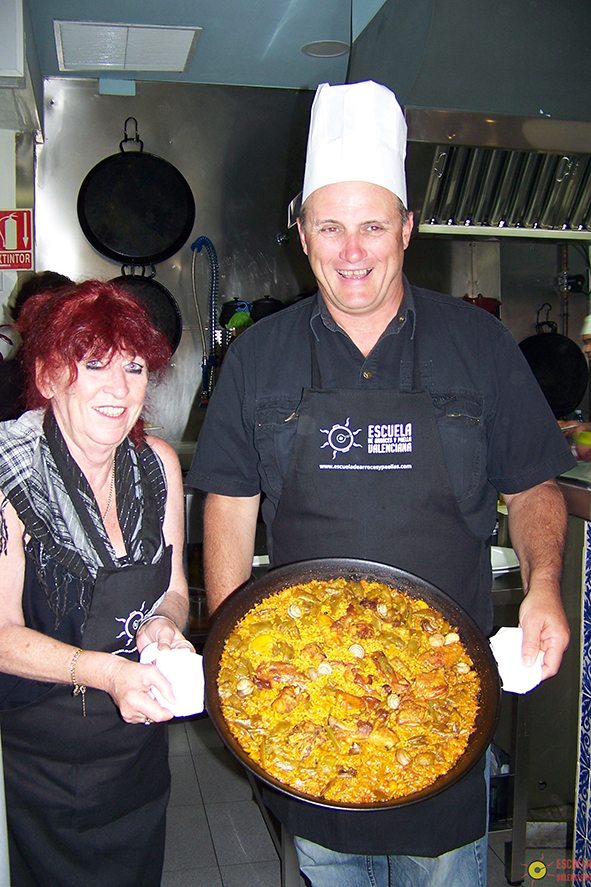 We received ‘perfecto’, and we graduated (with 1st class honors) from the Academie of Paella. We are now Paella Ambassadors from Valencia, Spain, and the home of the only real paella. 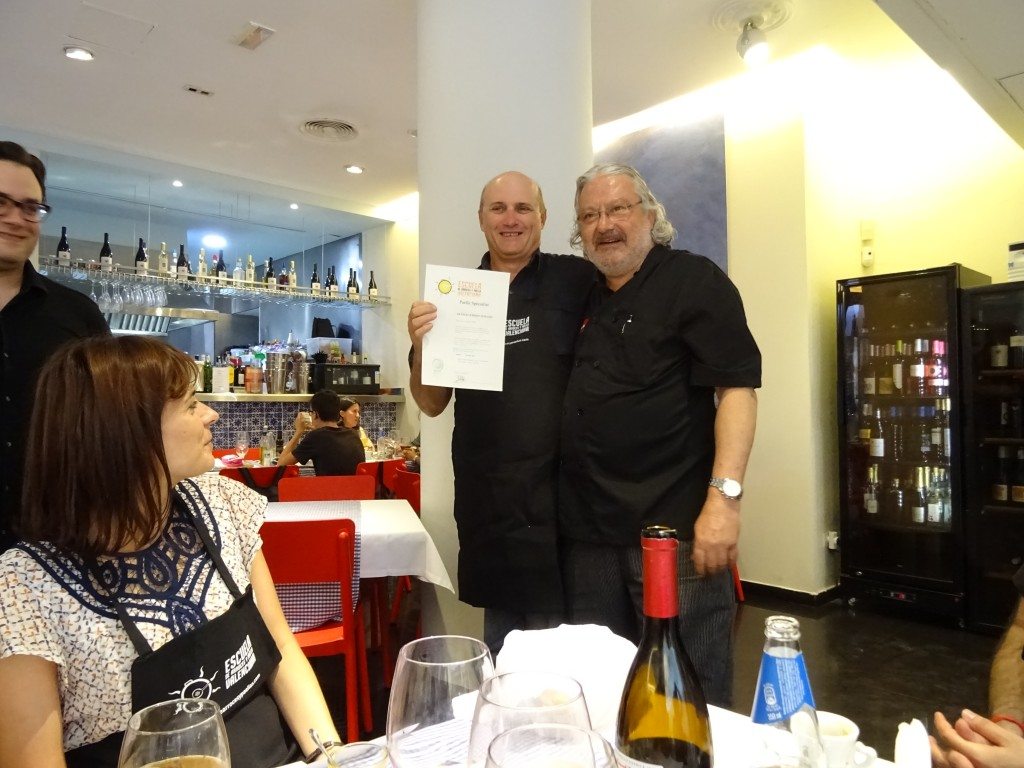 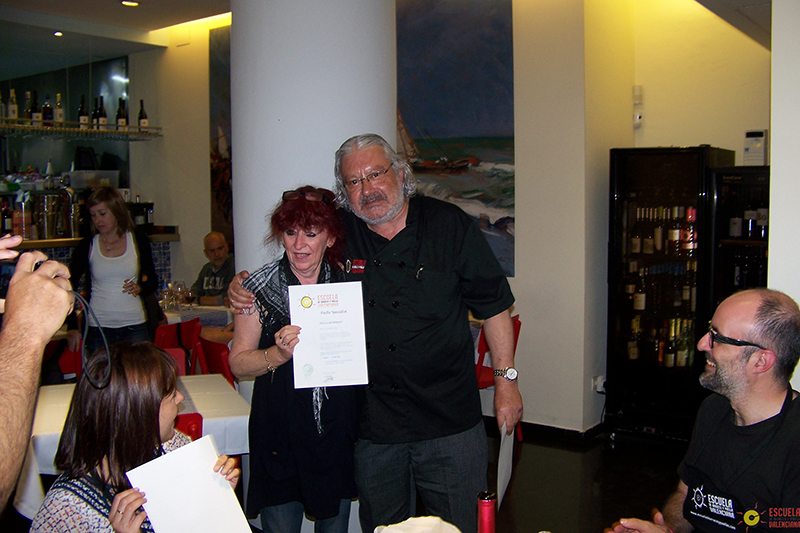 The Writers were the guests of Escuela de Arroces y Paella Valencian and Valencia Tourism. We thank you both for such a fantastic experience, and we promise to take our paella ambassador roles very seriously. We love Valencia. 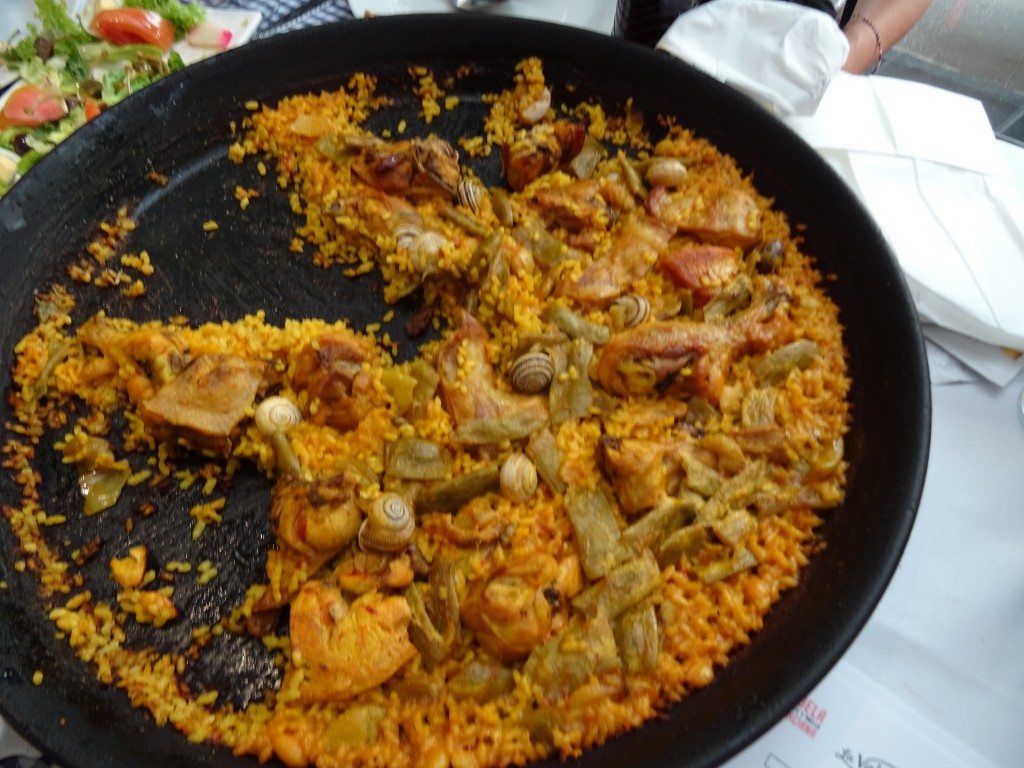