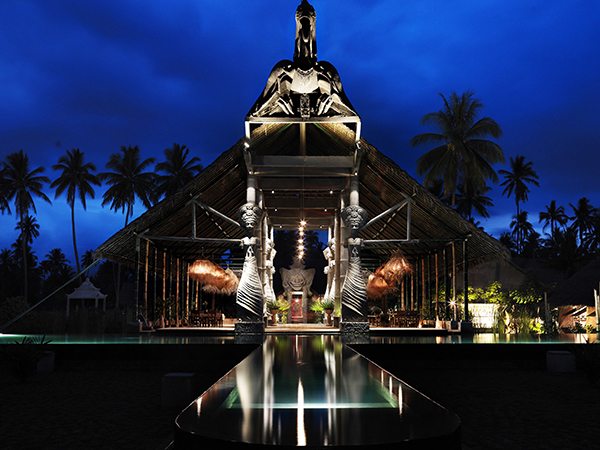 If you like quirky and individual as we do, then there can be nowhere more exotic, and highly original than Hotel Tugu Lombok. Like its sister property Hotel Tugu Bali, this luxury resort stands as a monument to the history and culture of this special island where the art and romance of ancient kingdoms are remembered and revered.

Read about the conception of the Tugu Hotels here to understand more of the man behind these living treasures. The hotels are a testament to times past, showcased by the ancient artifacts collected by the owner that informs the décor of the resort.

Visiting Lombok and staying in a place that exudes history and culture may well be a good idea before the island is well and truly put on the map, and it will be.

What we like about Hotel Tugu Lombok
Wow factor
Cultural and heritage significance
Awareness and care for the legends of the island
Just look at it – it speaks for itself in the uniqueness stakes
Service – friendly, professional and you are number 1
Dining Options – where you can eat wherever and however you want
Excellent locally sourced produce

The Island of Lombok

Lombok is the less well-known and less touristy island near Bali. It is often called the unspoiled Bali. With beautiful beaches, enchanting waterfalls, the volcano of Mount Rinjani combined with relatively few tourists, Lombok is a paradisiacal tropical island. It is becoming a hot spot travel destination where life remains relatively untouched by the tourist industry. The clean sandy beaches and on trend surf spots have meant that is starting to be discovered.

The beauty of Lombok is that the traditional way of life has remained unchanged for hundreds of year. However, in saying that the island is home to some amazing resorts capturing the magnificence of Lombok and giving the traveler what they are wanting.

Getting to Tugu Hotel Lombok

If you are after a quiet and peaceful location unspoiled by other tourists, then you will need to get to the boutique hotel. The major airport is in Denpasar Bali, and there are frequent flights from here to Lombok Airport (Bandara) takes approx. 30 mins. Alternatively you can catch the fast boat, which takes about 2 ½ hours. From there you will travel by car for 2 hours through the breathtaking beautiful scenery. Hotel Tugu Lombok is located on the pristine white sand beach of Sire, on the northwest coast of the island. 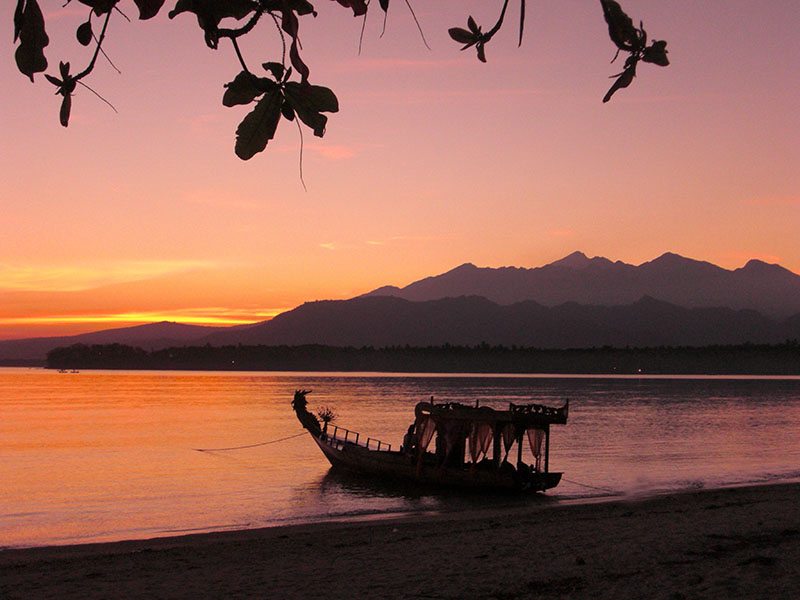 This is a luxury art hotel where the owner, Anhar Setjadibrata, has spent many years collecting artifacts and art to keep Indonesia’s history alive rather than being forgotten.

“The Tugu mission is to bring back to life the art, soul and romance of Indonesia’s yesteryears.”

Hotel Tugu Lombok surrounds itself with chapters from the romantic epic of the Mahabharata. It is here and at his other establishments, that the romantic nature of the hotelier shines through. Read more about him here. 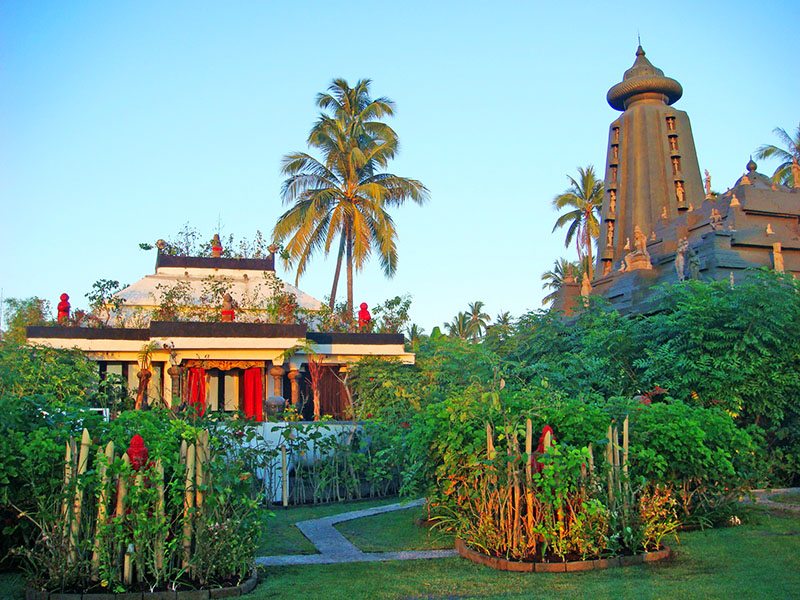 The reception house was purchased by the owner of the Tugu Group in Sumatra before relocating it to Lombok. It is about 200 years old and made entirely of tropical hardwood. The history of this house is that it once belonged to a Malay man, who rented it to a Chinese family in the 19th century. It is a living example of the colonization of the area at this time. 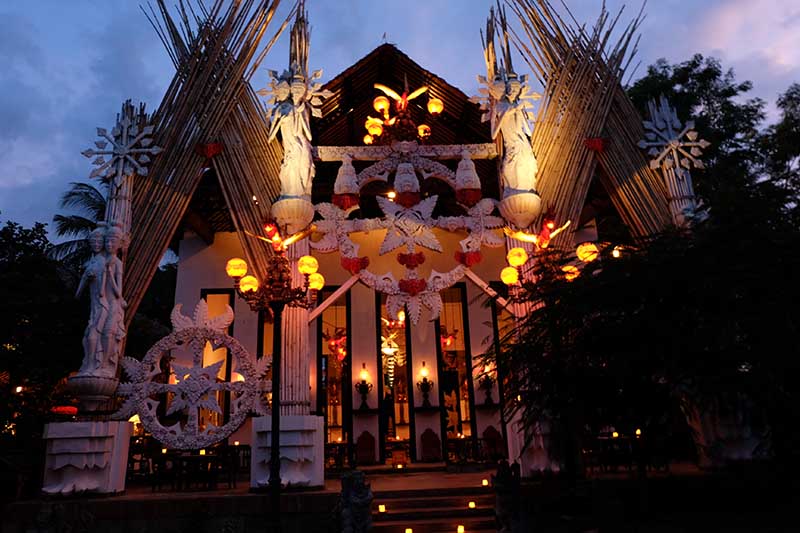 Photograph is of Gedong Gandrung

The Legend behind Lara Djonggrang

Lara Djonggrang is now a bar but was once an original wooden building and is testament to the legend of Lara Djonggrang. The legend tells how a man killed Lara’s father but became so besotted with her beauty that he wanted her for himself. Obviously she wanted nothing to do with the many who murdered her father. She agreed to marry him if he built her 1000 temples overnight. With the help of many demons, he built all night, but …the maids fearing that he would succeed started pounding the rice very early to and woke up the roosters. The roosters made such a fuss, that the demons fearing the sun was rising, left, and the suitor/murderer only had 999 temples. Lara was free.

There is a 200-year-old wooden Chinese temple in the gardens – the Sang Hyang Barong Temple. This was saved from the Dutch assault on Lombok in 1894. It is now used for weddings, yoga and meditation classes. There is also a Hindu temple, which houses the Hening Swarga Spa. 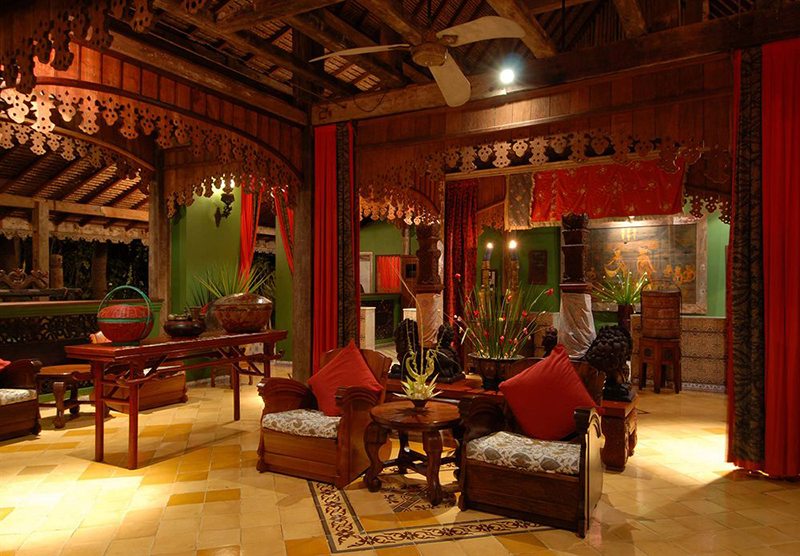 Photograph is of Reception House.

There are 18 rooms only at the boutique Hotel Tugu Lombok, making it an exclusive and boutique hotel far away for the prying eyes of others.

There are three categories of rooms for guests to stay in:
The Kampongs are bungalows with a private terrace, as well as indoor and outdoor bathrooms.
The Aloon-Aloon villas have 125 sq. meters of space and their own garden.
The Bhagavat Gita villas cover 350 sq. meters, with a large private courtyard garden leading to the front door of the villa, and a veranda opening onto a garden with a private plunge pool and a stunning view across the sand to the sea.

The grounds are extensive and immaculately maintained, the beach is beautiful to look at and is particularly good for snorkeling around the coral. 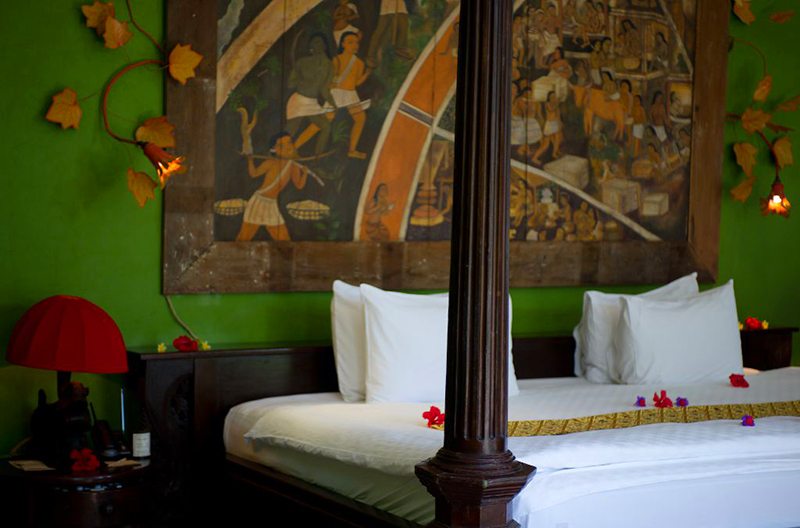 Beautiful private candlelit tables can be arranged everywhere and anywhere that you choose. Popular choices are in the lush gardens or a private candlelit beach under the stars. As with Hotel Tugu Bali, a dinner for two can be served by a parade of 12 waiters or a 14th-century army of 30 people, representing Lombok’s heritage.

The hotel faces the beautiful Sire Beach and also has an infinity pool.
Afternoon tea is offered free of charge to all guests at the hotel, which showcase local cuisines.

Things to see and to do

The hotel offers free rental of bicycles to its guests. They can also arrange a number of excursions, including boat trips to the nearby Gili Islands. Other options are and drivers to accompany guests on tours of the waterfalls and villages below Rinjani. There is also an 18 hole Championship Golf Course, as well as facilities for helicopters to land. Then again, you could just embrace the tranquility of this amazing resort.

Tugu Hotel Lombok like Tugu Hotel Bali in Canggu are special and unique; it is totally different and luxurious. It also pays magnificent attention to the culture and history of both Lombok and Indonesia.