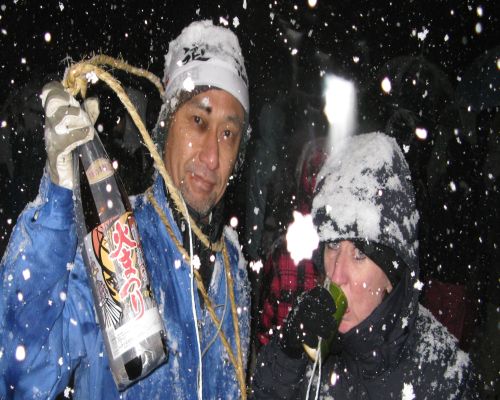 The Dosojin Fire Festival or just the Fire Festival in Nozawa Onsen is one of the most amazing experiences we experience in the epic village of Nozawa Onsen, Japan. How we got to be a part of this was interesting. Wanting an overseas skiing holiday that also provided a large dose of culture and a picture posing Nozatcard village – I happened upon the village of Nozawa Onsen in Japan. Renowned for its powder snow and long runs, a traditional Japanese village and an immense number of onsens this seemed to be a great choice.

As an addict for festivals, there was also the Nozawa Onsen Dosojin Fire Festival, which occurs every January the 15th and happened to coincide with our travel dates.

Nozawa Onsen is located in the northern section of the Nagano prefecture which is easily reached by Shinkansen, the bullet train from Tokyo. We then travelled via a funny little train through tunnels, the snow deepening as I sang Lara’s Theme from Dr Zhivago – it was one of those types of moments. We then arrived at Nozawa Onsen. It was bucketing down snow and so very beautiful. Cobbled stone streets and wonderful lamps, the aromas of food from so many food stalls greeted us. Heaven.

As we continued our walk through the village of Nozawa Onsen, we saw a large group of people laughing and dragging down huge tree trunks through the streets. One of the men approached us with a bottle in hand and intimated I should drink. My first shot of sake, and not my last. We followed these very very happy men as they pulled these massive trunks along the road. They stopped every metre or so to be ‘well’ sociable, with everyone. 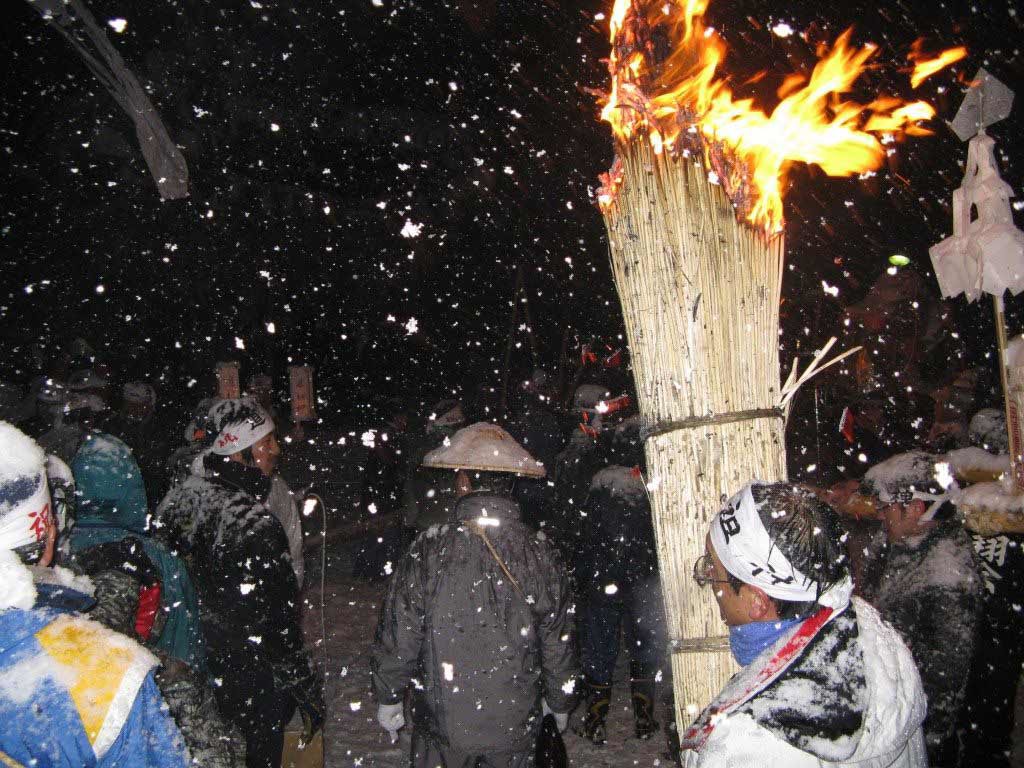 What is the Nozawa Onsen Dosojin Fire Festival about?

The Dosojin Fire Festival is a ritualistic festival where 25-year-old and 42-year-old men, the unlucky ages according to Shinto beliefs are expected to show their bravery while building the shrine and then throughout the burning of it, by either protecting it or burning it to the ground. This serves to ward off bad luck and to assist in a good harvest for the year.

What Happens on the Night 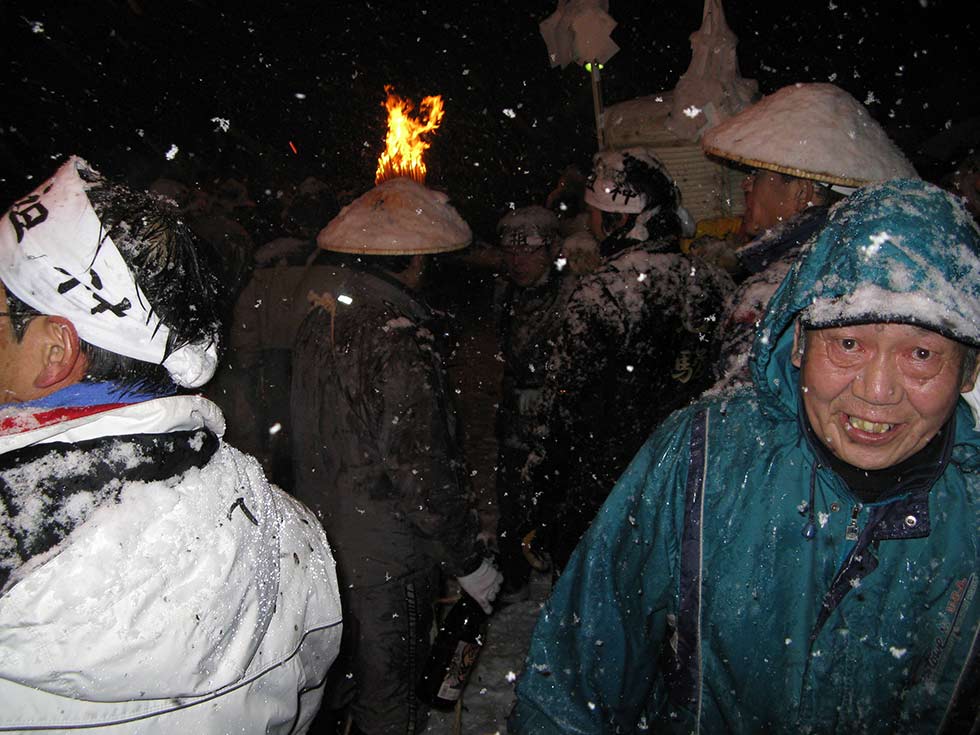 We watched them build the shrine; how they did it, I am still wondering about as they continued in their merry habits.

Eagerly we went down to the village on the night of the ceremony and for some reason got caught up in the parade. Again, everyone was fuelled by Saki, it was very cold after all, and the villagers are nothing if not generous! We had been told to dress for the cold and not to wear anything good. Wonder why? As the procession got closer to the shrines the faggots were lit – after many laughter fuelled attempts, along with some the villagers hair being set alight, the procession arrived at the shrine. We could hear the singing and laughter of the shrine protectors already.

Then it all started. The 42 years olds were already on the pyre and sang songs, drank even more and started chanting “Hi motte koi!” – “Bring on the fire”. Well, the 25-year-olds obliged attacking the shrine with every possible means of starting a fire. There were embers and sticks flying and Saki flowing everywhere. The 42-year-olds continued to defend, and the 25-year-olds continued to attack, as we continued to watch and attempted to protect ourselves – well from everything, sort of. In theory, it is over when the shrine is well and truly alight and unable to be saved. The order had been restored to custom and belief. This was a great welcome to Nozawa Onsen. 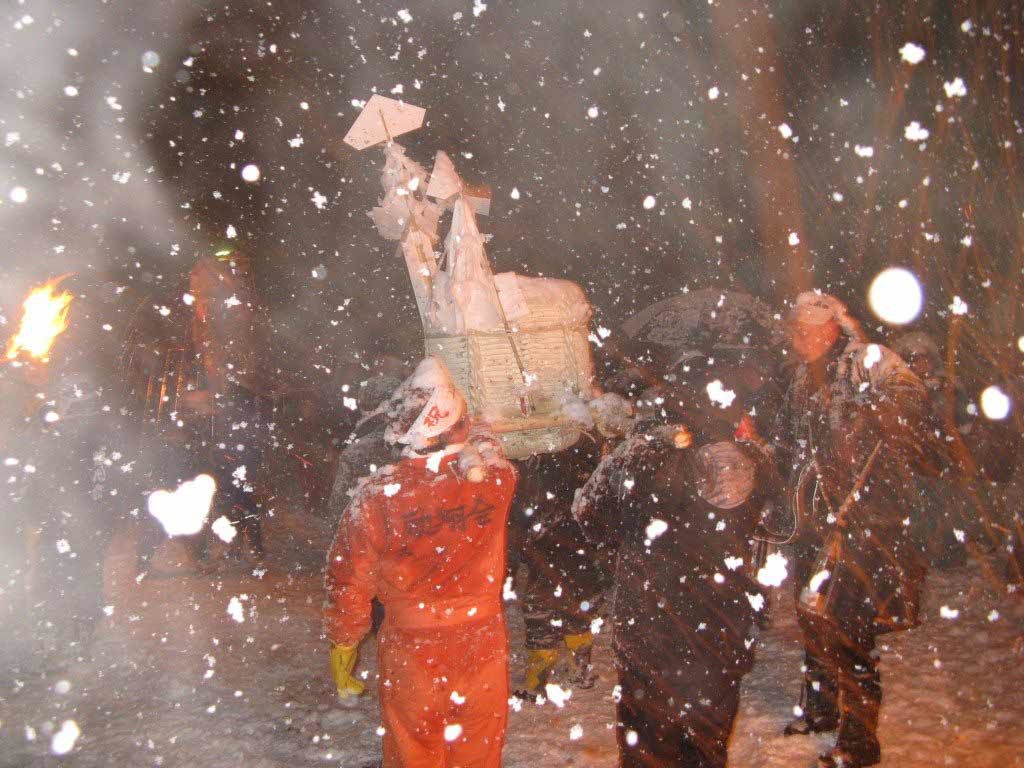 I believe that it was only when the massive saki barrels were empty, then that is actually when it is over.

I had no intention of skiing the next day for two reasons. One, I would not be well and two, nor would all the lift operators and ski instructors either mostly being 25 and 42-year-olds. The villagers own the ski slopes, and they perform all of the duties there. 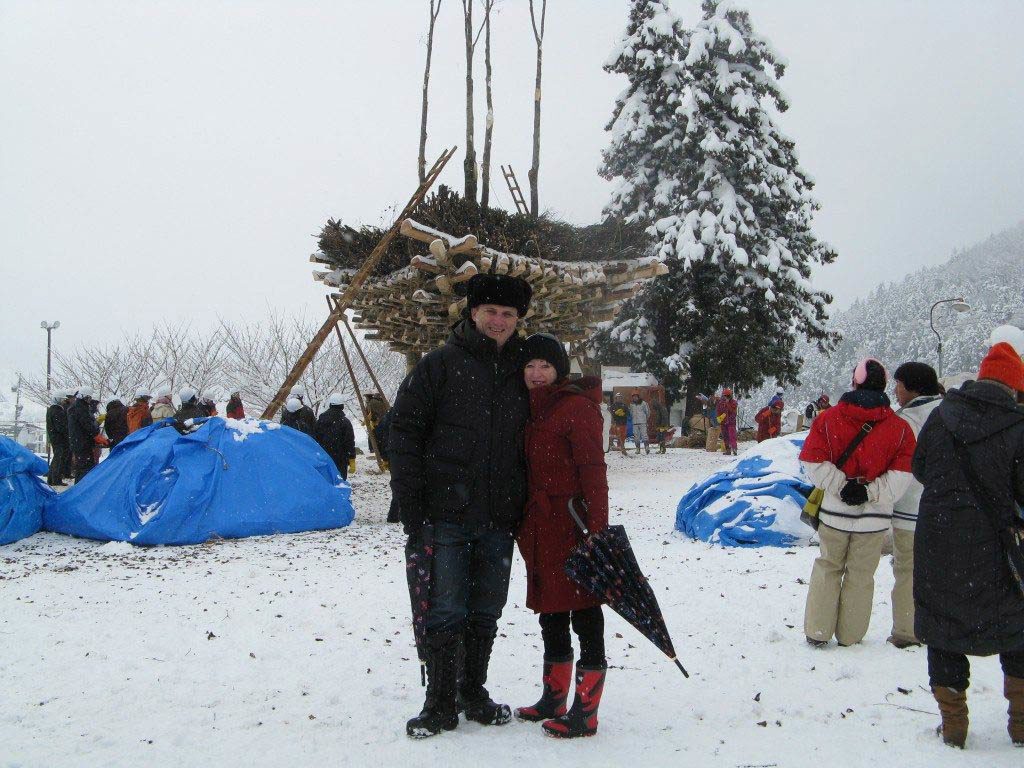 The Nozawa Fire Festival must have been cultural and enlightening travel experience,  as we have been back four times – the fifth trip is already booked.

How to get to Nozawa Onsen

See this link for specific details on getting to Nozawa Onsen, Japan

Where to Stay in Nozawa Onsen
There are many types of accommodation, from ryokans to lodges and hotels.