GET NAKED in a Japanese Onsen 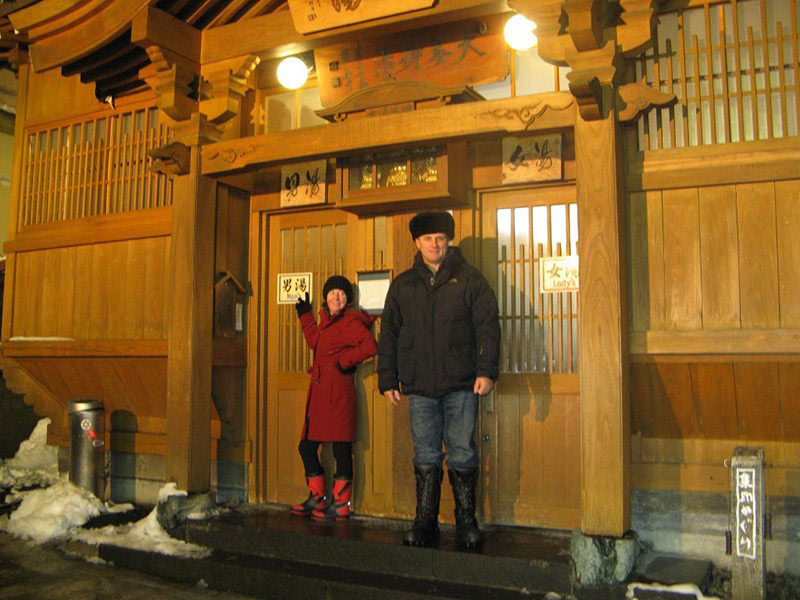 Why not GET NAKED in a Japanese Onsen? Everyone else is doing it;  and this is why. Many people visiting Japan for the 1st time would love to experience onsen – the Japanese natural hot springs.

What many people are intimidated by is getting naked in front of a lot of people. This guide will tell you about the history of onsen, its therapeutic benefits and dispel any concerns you have about getting naked and coping with the etiquette that having onsen involves. You will notice that I said 1st-time visitors. Once you have onsen, you will become a convert. We have been regular onsen users for years now, and we vouch for the pleasurable, albeit very hot experience. Enjoy your first onsen and let us know how you get on. 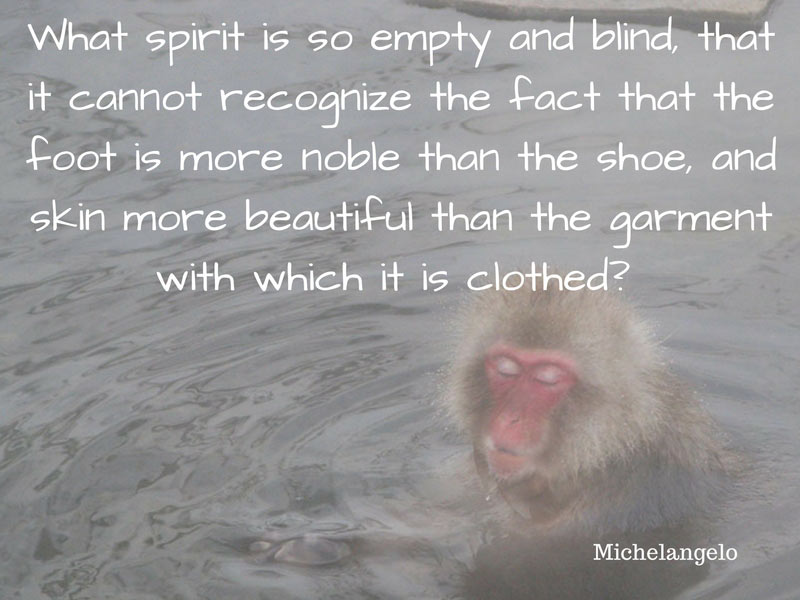 Traditionally, onsen were located outdoors, although a large number of inns have now built indoor bathing facilities as well. One of the most interesting cultural aspects of Japanese life is the almost ritual visits to hot springs or onsen throughout the country . Japan is a land of onstant seismic activity, because it is located near major tectonic plate boundaries and is situated on the Pacific Ring of Fire.  This has caused thermal springs, or onsen, and bathing in these has a  3,000-year history.

Onsen (温泉) is the Japanese word for hot springs; ‘on’ is warm, and ‘sen’ is spring. 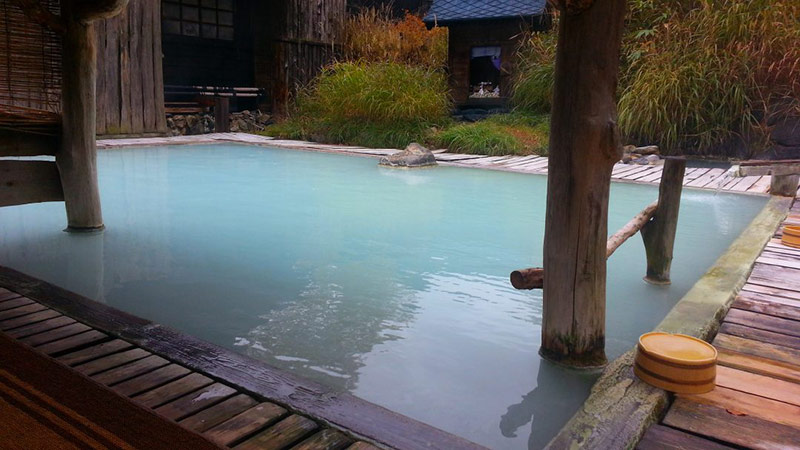 Much as we would like to say/write experience (an) onsen, it is said as ‘experience onsen’ in Japan.Some linguists might help me out on this one. I will slip up through this article by habit.

The origins of onsen

It is believed that ancient hunters stumbled upon these bubbling sulphur-scented pools when pursuing wounded animals. The wounded animals would go to the hot springs seeking relief from their pain. Then the hunters, tired and often injured themselves, would also seek solace in the soothing thermal pools. Today, many onsen buildings still have statues of brown bears and white herons.

The arrival of Buddhism

When Buddhism came to Japan in 552 AD, this bathing ritual, which had gained popularity with many people, became a symbol of purification and was in keeping with the religion’s principles. The cleansing of oneself from the sins of the mortal world are core tenets of Buddhism. There is evidence that many onsen were established by famous Buddhist monks such as Kobo Daishi, Gyoki, and Ippen Shonin, who believed that Buddhist deities had guided them to the thermal waters.

The arrival of Christianity and the prudes

When Francis Xavier and the first Christian missionaries came to Japan in 1549, they were appalled of this Japanese custom of almost daily public bathing, often with men and women sharing the same tub. The fact that they only bathed irregulalrly did not help matters. The missionaries however had an uphill battle and finally allowed the Japanese to have an onsen once a week.

Return of the Japanese

The missionaries were eventually expelled by the Tokugawa shogunate, and the Japanese continued their daily habit of onsen.

With this however came a hierarchical segregation. A samurai would not bathe with merchants, considered them to be well beneath their dignity.

The realisation of the health properties

In 1709, Goto Konzan, an Edo doctor, having seen the therapeutic benefits of onsen, commenced the first medical study of hot springs. In World War II, there were over 50 national hot spring hospitals established, and onsen are still antibiotics used in the treatment of chronic diseases such as rheumatism and hypertension, and many other illnesses. There are 14 basic different types of onsen water. The gypsum springs have high calcium content and are effective in treating wounds and often used by the samurai warriors after fierce battles.

Nowadays, they are used daily by the local people, are still antibiotics used for their therapeutic benefits, and onsen are very popular in ski resort towns to sooth the body after smashing the powder.

In the early 1950’s, female Japanese pressured the reformed Diet to pass laws making it compulsory for public baths to separate male and female baths. 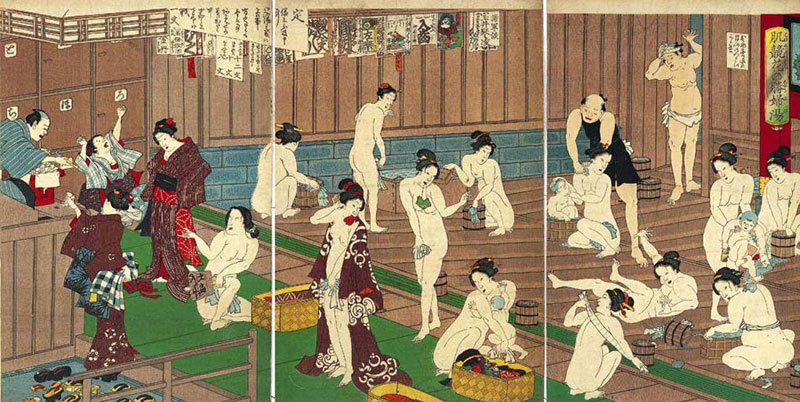 Depending upon where you go will depend upon the onsen that you have. There are many resorts now that will allow couples to go in together in bathers.

However, for a totally authentic experience, go to a local onsen, which are segregated and get naked and enjoy the experience and the therapeutic benefits.

There are onsens within hotel complexes, but the real deals are the public onsens, utilized by the locals at least once a day, and for visitors to the region. It is a totally different experience to go to a local onsen, and one where the etiquette is paramount to observe. This is out of respect and that is the way it is. If you do not observe the etiquette, you will get in trouble…just a little. Onsens are gender specific so boys in one door and girls in another. There is separation, like a huge wall. 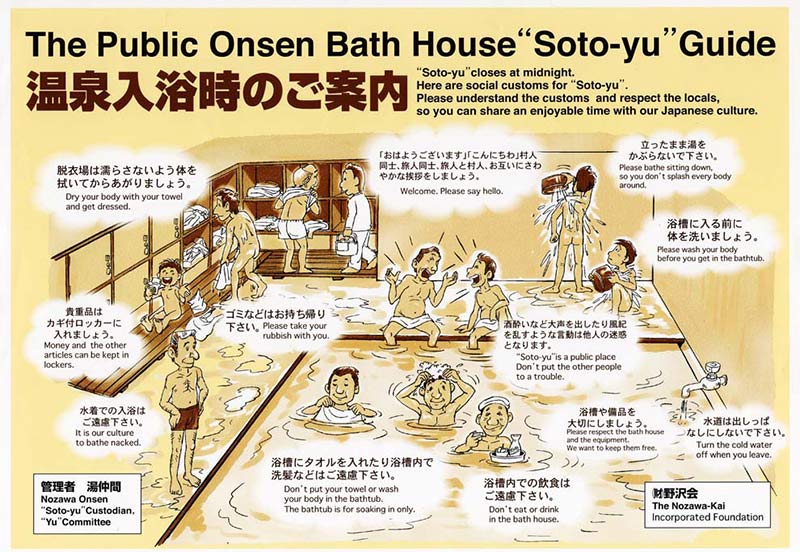 Much as a lot of Japan have many codes of conduct covering many situations, so it is with having an onsen. These are the rules that you need to be aware of when having one of the most pleasant and culturally enriching experiences – the Japanese onsen.

1.Take your basket of soap, washer, shampoo, etc. to the onsen, whilst reciting the rules

2. Take off shoes inside doorway

3. Walk into the little open area and remove all clothes. Don’t be modest there is absolutely no need whatsoever.

4. Put clothes AND YOUR TOWEL on an available shelf, not someone else’s

5. Enter ‘the’ onsen and make your way through the steam

6. Grab a washbasin and small stool and take it to an available space near the taps around the sides of the onsen.

7. Fill the basin with some water from the onsen, to help you get used to the temperature. Give yourself a good rinse.

8. Now enter the onsen and soak and think about the realities of life

9. Now get out of the onsen and wash yourself – thoroughly – every nook and cranny. The locals will observe what you do, and you cannot enter the onsen if you are slightly dirty. So go all out.

10. Now once you have rinsed off every one of the single soapsuds you go back into the onsen, for a relaxing soak. Oh, the irony. The water can be around 40 degrees Celsius. The higher up the onsen in Nozawa Onsen the hotter the onsen, as it is closer to the origin of the thermal springs

11. You can take your ‘clean’ washer into the onsen, but it can only be put on your head. DO NOT use it on your arm or another part of your body as I did, or you will get the crossed arms raised in front by a villager. I know.

12. After you have soaked for a while, do not rinse off with the tap water as the onsen water has natural minerals that are good for your body.

13. Dry off your body as much as you can with your washcloth. Now clean up your area. Rinse down where you were squatting, return your stool and basin and go back to the dressing room. Do not walk water in here, or else crossed arms.

14. Now you can use your towel and get dressed, go out and put your shoes on and leave (with your tail between your legs as I did). I am sure I heard some of the women laughing.

The snow monkeys are Japanese Macaque and are internationally renowned for bathing in the onsens or hot springs in the Nagano prefecture of Japan. We have had the good fortune to see them, and they never fail to intrigue in the Jigokudani Yaenkoen Park. This monkey species, which is native to Japan, can survive temperatures of below -15 °C. 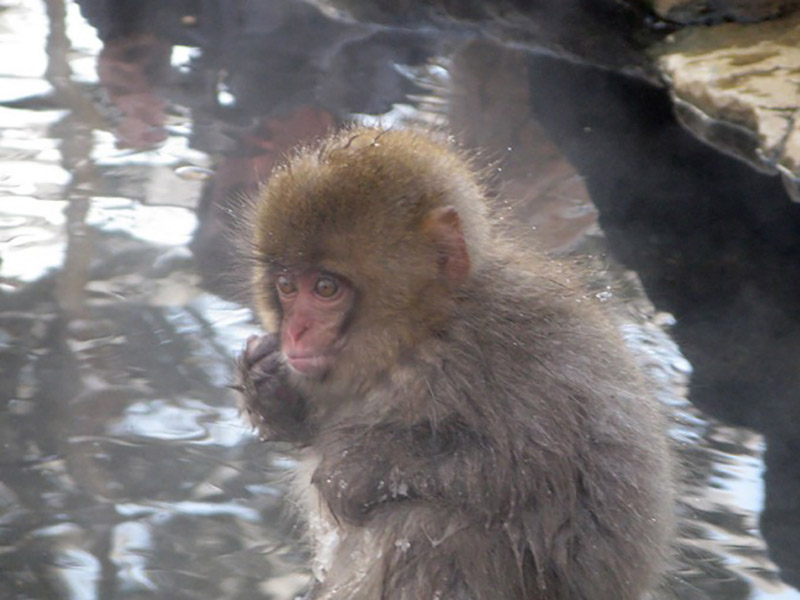 They spend most of their time in the snow-covered forest, hunting and gathering seeds and fruit and bathing in the boiling onsens. The park is located in the Yokoyu River valley near Shiga Kogen, and the name of the park is Jigokudani, which means “Hell’s Valley” because of the steep cliffs and hot water arising from the onsens. This is an environment that is conducive to the monkey’s survival and it is covered in snow for the majority of the year. 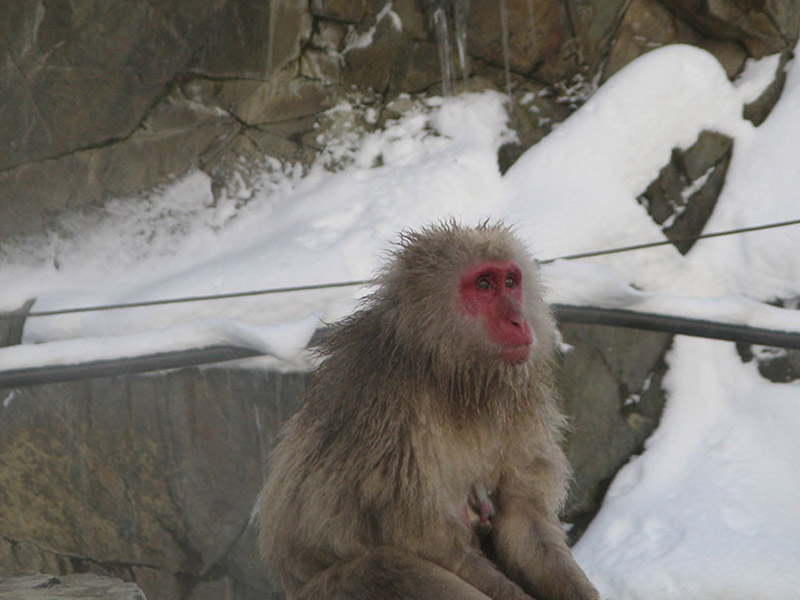 The walk through the forest itself to get to the monkeys is seriously beautiful and severely cold, so it certainly pays to dress the part, but then you get to see interesting things along the way. There is a ryokan located in this quite remote valley where you can see ‘humans’ bathing in the outdoor onsens. Then you arrive to watch the monkeys going about their daily business all watched over by the alpha male, who does not want to be trifled with, and why should he. This is a beautiful experience and worth embracing and taking a few photographs of these remarkable animals. You can read more about it here.

Get naked in a Japanese Onsen – it will one of those experiences that you will not forget.