Visit the Indonesian Spice Islands of Saparua and Ambon 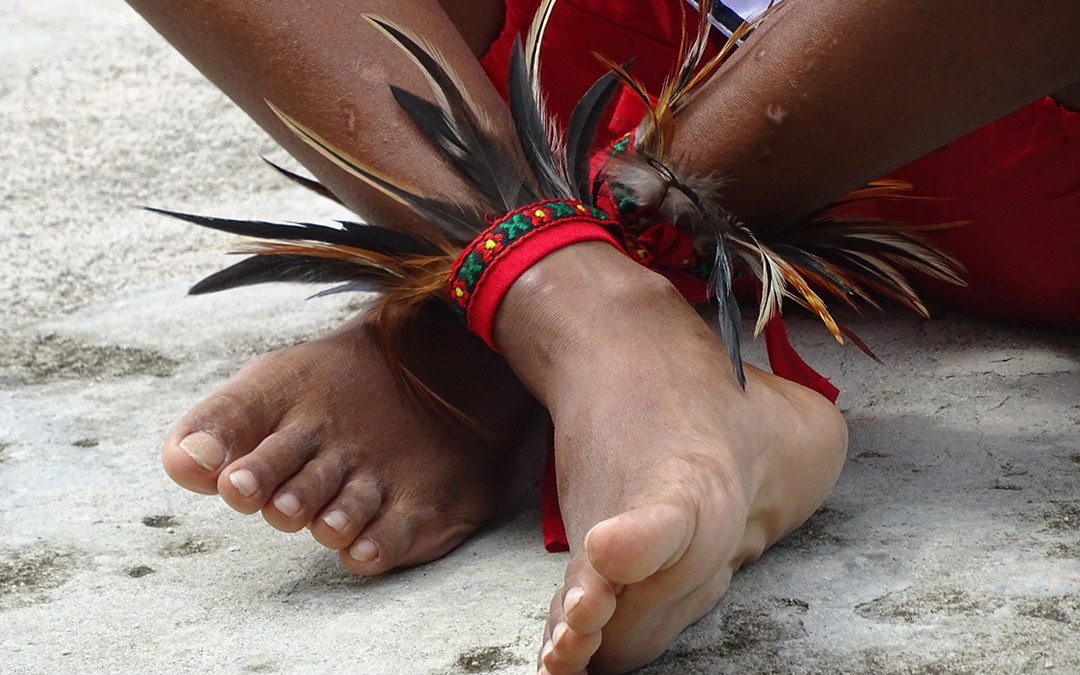 We wander through the daily market on Saparua Island Indonesia. This island is in ‪the Maluku‬‬‬ or Molucca region of Indonesia. A man calls out ‘Hello Mister’ to us. This is the generic greeting to men and women here. We wander over and see the large bags of aromatic cloves, running our hands through this pot of gold. Cloves, nutmeg and mace, were indeed once more valuable than gold, to the ship faring nations in the 16th and 17th century. It was this checkered history of these Spice Islands of Indonesia that have made it what it is today. 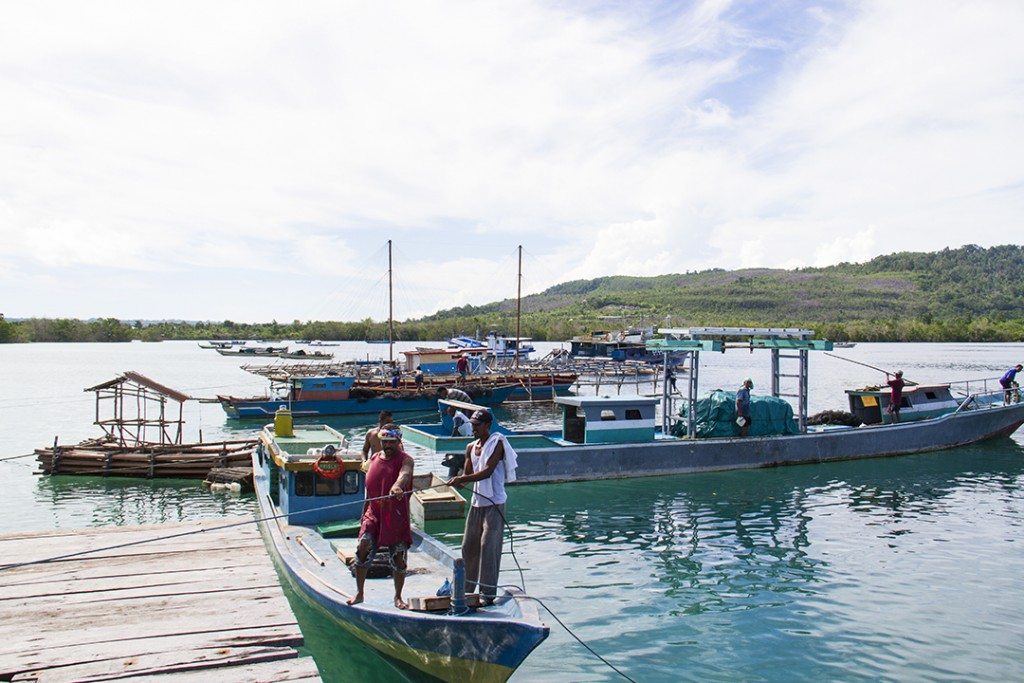 I would recommend that you visit the Indonesian Spice Islands of Saparua and Ambon before everyone else discovers the sheer beauty, history, and culture of them. Add a few more of the Maluku Islands and you will find yourself a modern day pioneer in this quiet and enticing province of Indonesia. 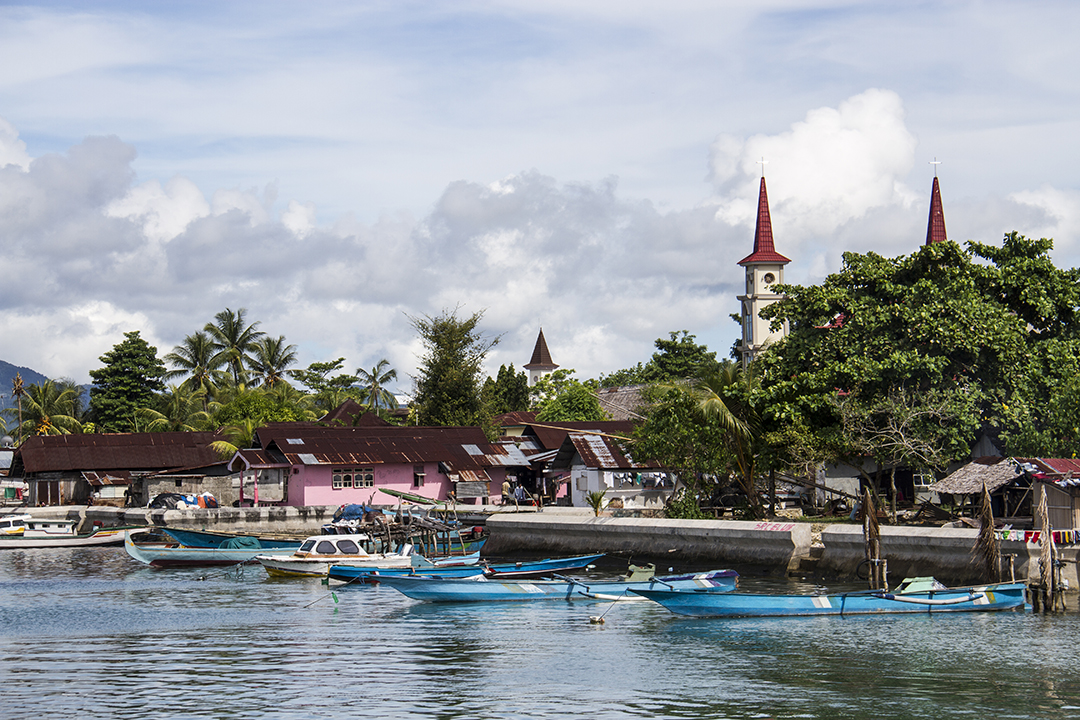 Why we visited the Indonesian Spice Islands of Saparua and Ambon

We had been invited by the Indonesian Tourism Board as part of the #WonderfulIndonesia initiative  to experience some of the different areas of Indonesia. Our very hectic seven days, saw us exploring areas of Northern, Central and Southern Sulawesi. We finished our last days on the Spice Islands of Saparua and Ambon, and we get it. Indonesia is a melting pot of lots of different parts. From the megalopolis that is Jakarta to the frenetic tourist destination of Bali, the Minihasa hinterlands of Northern Sulawesi, the Ernest Hemingway port city of Makassar in Southern Sulawesi, to the Spice Islands of Saparua and Ambon – Indonesia can sure mix it up. 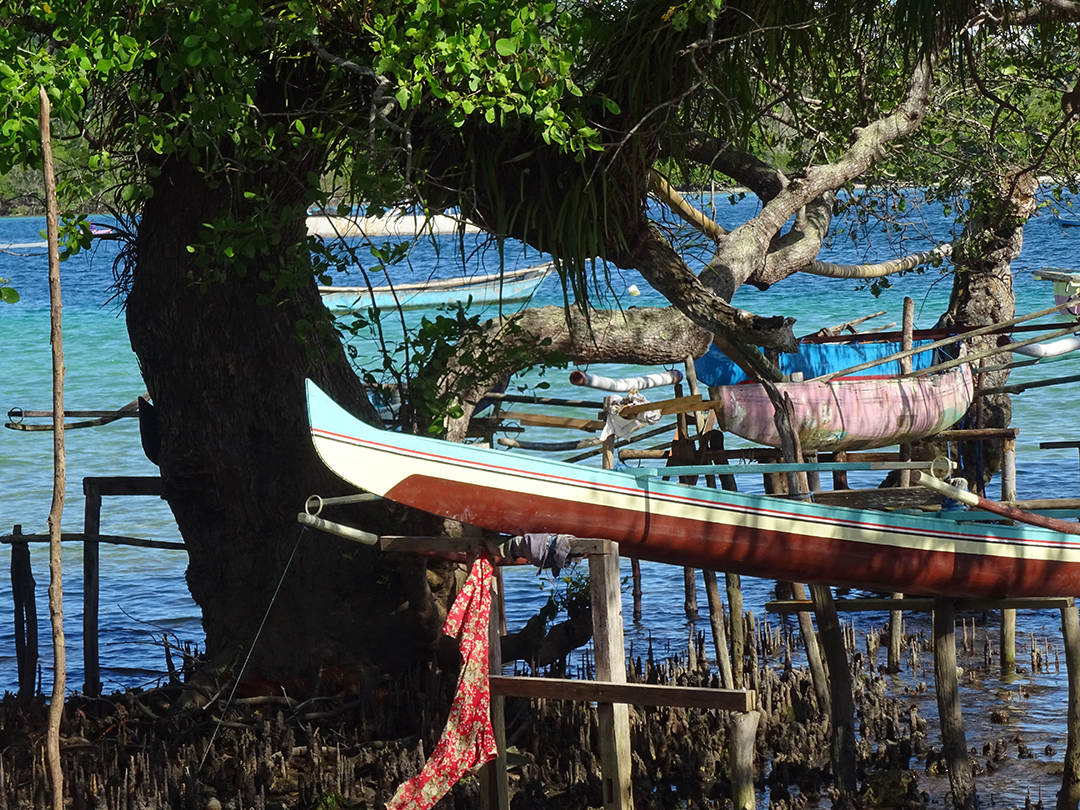 [clickToTweet tweet=”Indonesia is geographically stunning. At times it takes your breath away. #travel #indtravel” quote=”Indonesia is geographically stunning. At times it takes your breath away. ” theme=”style4″]There are no two ways around this. The Maluku‬‬‬ Islands of Indonesia are scripted from a Somerset Maugham novella. As he is one of my favourite writers, it seemed to be a sign. There are over 1000 islands in the archipelago that make up the Maluku region, and we got to experience just two of the islands, and we are fans. We didn’t get a chance to go to the Banda Islands, also known as the Nutmeg Islands on this visit, but we will when we return. Now we will content ourselves with reading the Banda based Somerset Maugham’s novel, “The Narrow Corner,” and await our return. 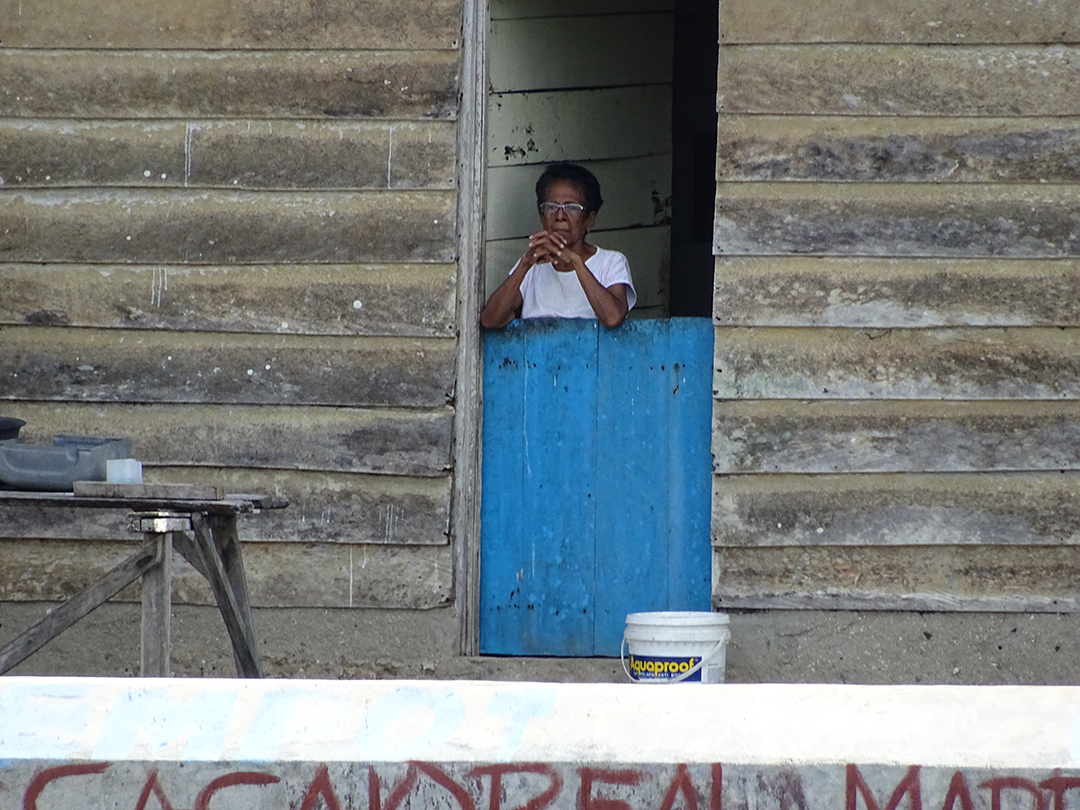 The islands of Ambon and Saparua are paradisiacal environments, with very few tourists. We feel that we are treading new ground, but of course, we are not, as history shows us. I have no doubt that the swaying palm trees, the tropical climate, the beaches, the lush vegetation, and the people who welcome the few guests with ‘hey mister’ will soon increase their popularity. 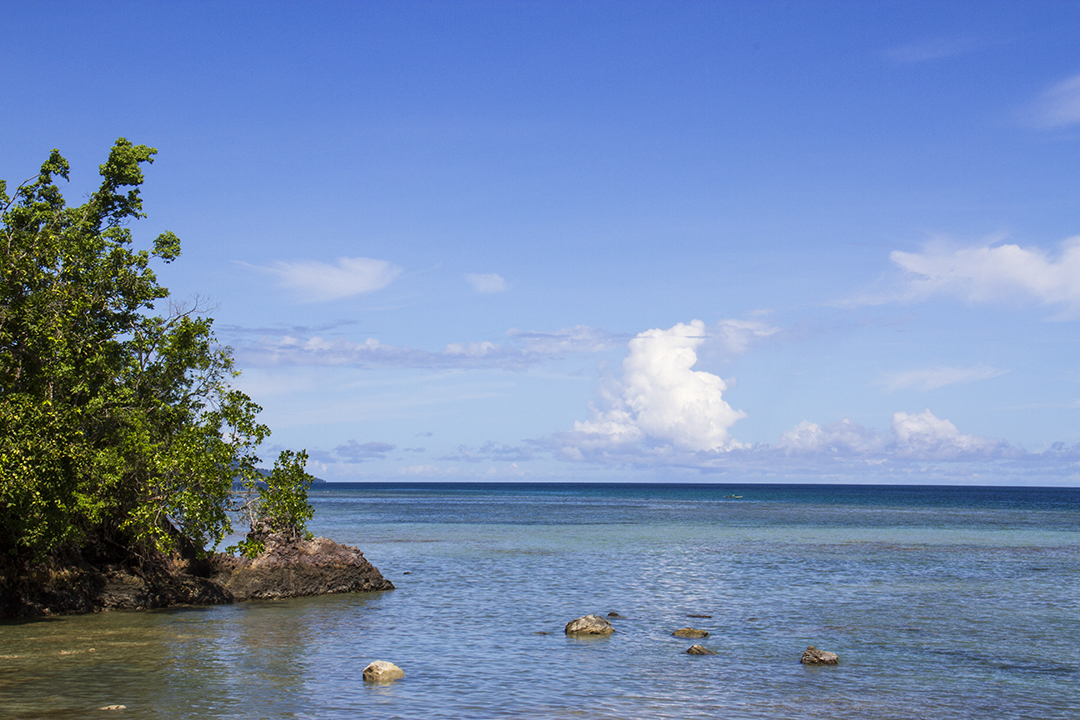 Not Tourist Destinations …yet

Visitors to these islands should not expect the infrastructures that are expected in other developed and over-developed tropical islands. A quick Google search will show you that there is little information about Saparua island and Ambon Island. However, there is sufficient accommodation, activities, food, and guidance to make your visit epic. The local and only guide service is the best way to go, and we give you the details later in this article. 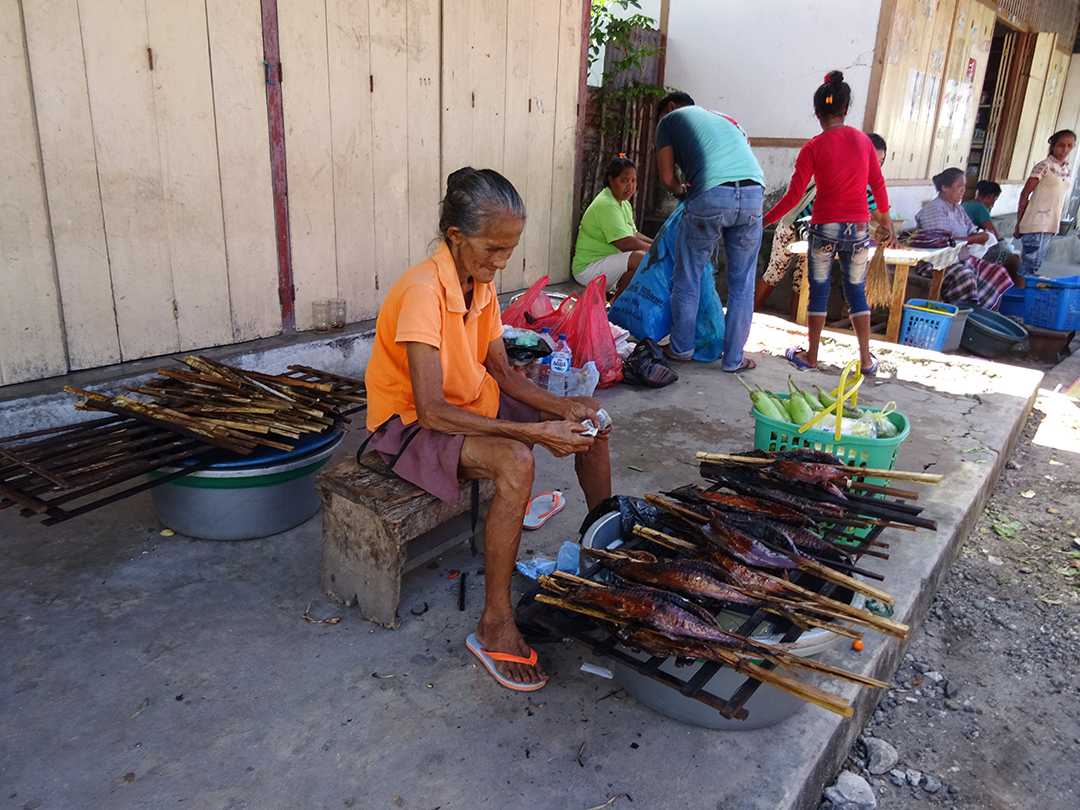 Getting to the Maluku‬‬‬ Islands of Indonesia

Getting to these Eastern Maluku‬‬‬ Islands of Indonesia is quite easy with 3-hour flights from the capital city of Jakarta, and many domestic routes. We flew via Palu in Central Sulawesi with a touchdown in Makassar, a port city and then into Pattimura Airport. The airport was named after a national hero in Indonesia who fought against the Dutch in 1816. But more of that later. We also hear that there is consideration by Garuda Airlines to have a direct flight from Darwin to Ambon shortly, meaning that if you want to get here first ….just putting it out there. 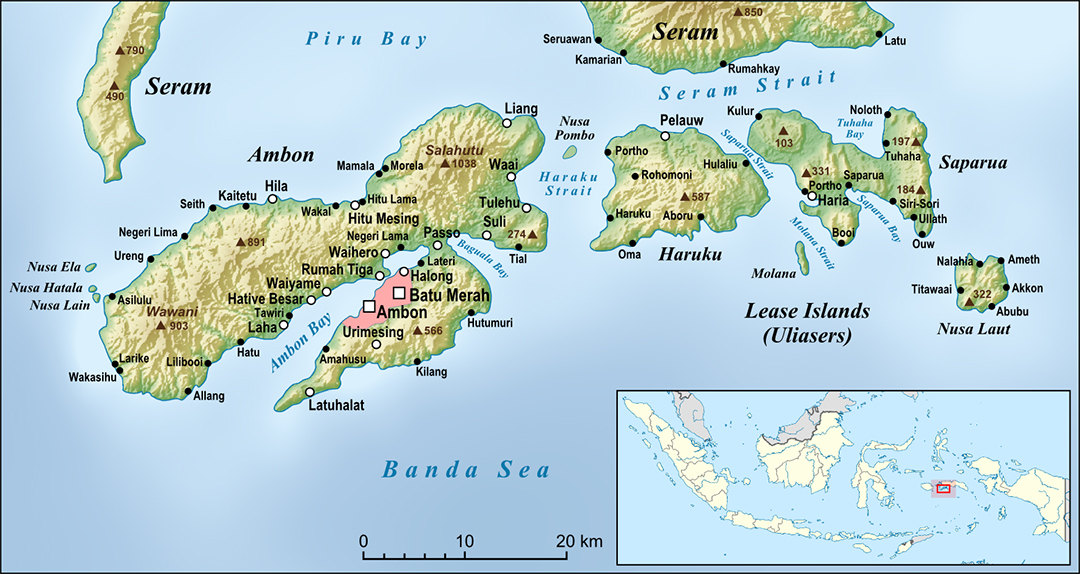 About The Maluku Islands

The Maluku Islands of Indonesia or Moluccas became known to the world as the Spice Islands. In the 16th century, a trade route was discovered to these somewhat remote islands. What made them a precious resource to the world was that the islands produced the highly prized spices of cloves, nutmeg, and mace. As with any prized commodity The Maluku Islands had been the scene of much jockeying between the major seafaring nations wanting control of this economic windfall. 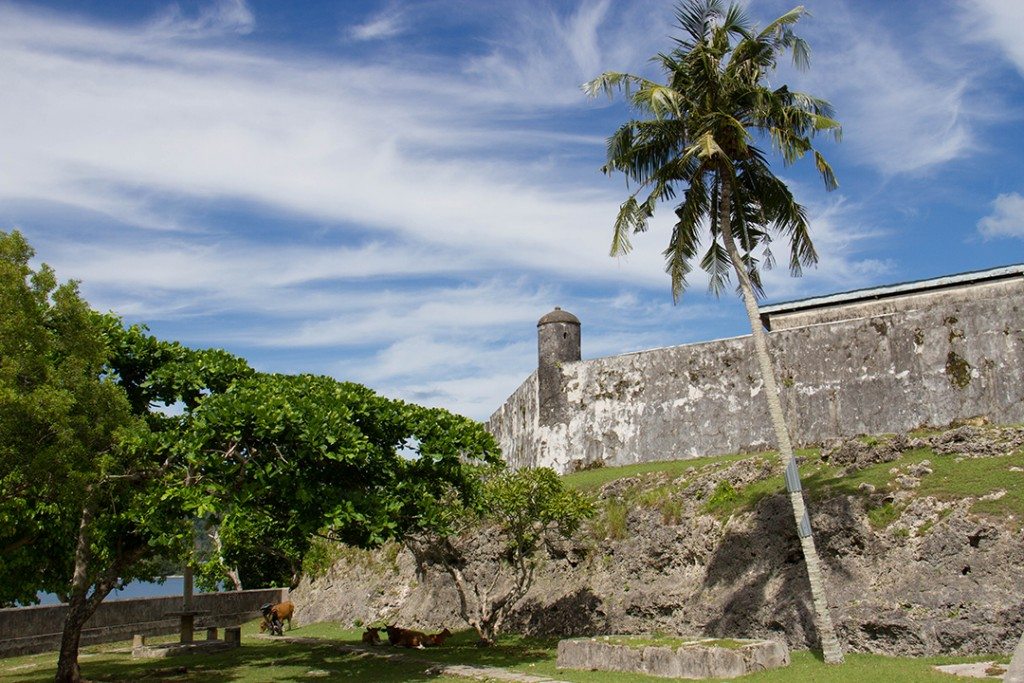 The Major Players or The Colonial Powers Arrive

The history of the Maluku‬‬‬ Islands of Indonesia has inevitably shaped the face of what we experience today. In a very simplistic nutshell, this is how it played out on these islands.
The Portuguese discovered the sea route to the small islands of Banda and Ambon and the prized spices of nutmeg and mace. They realised that cloves were being cultivated on the islands of islands of Ternate and Tidore. It was not long before Indian, Chinese, and Arab traders made their way to the money pit, which is exactly what the islands became to these traders. 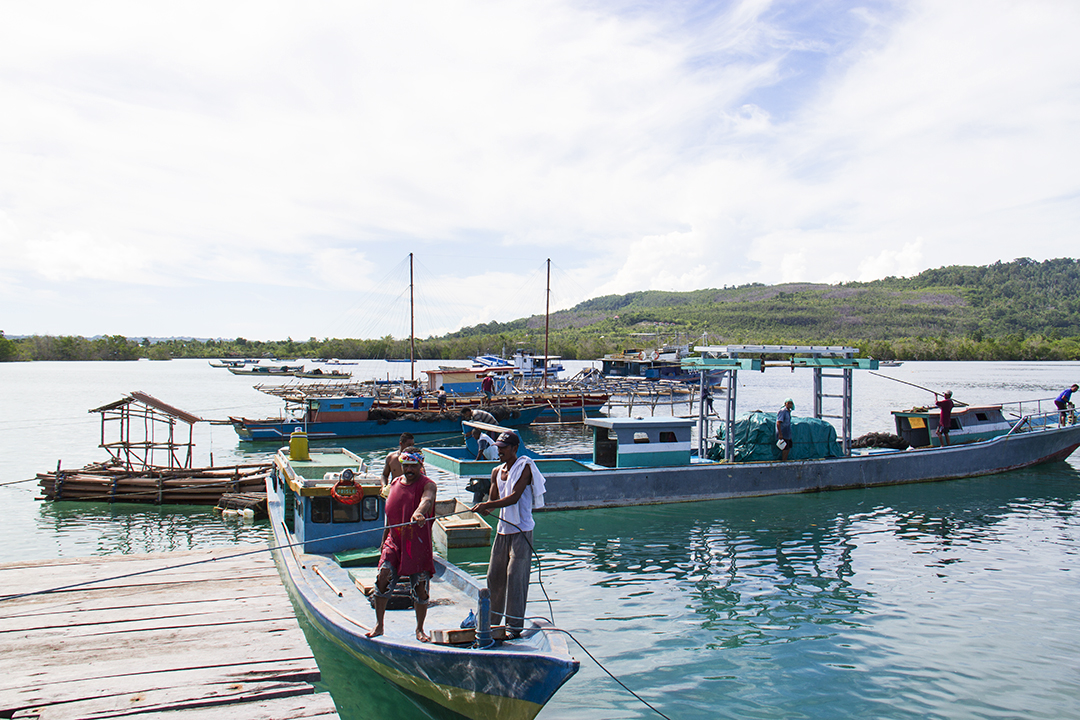 The Dutch and the Spice Islands

It was the Dutch however who not only threatened the domination of the Portuguese, but succeeded and the Dutch East India Company gained domination of the spice trade. They subsequently became known to the world as the Spice Islands. In a calculated move to retain control, the Dutch eliminated the clove trees from all of the islands except Ambon to keep the valued commodity at a high price. This did not bode well with the local people. Maluku opposition spread throughout the islands, and to Saparua Island where we stood smelling the heavily scented cloves.

It was not until 1949, after the Second World War, that the Dutch officially granted independence to Indonesia. 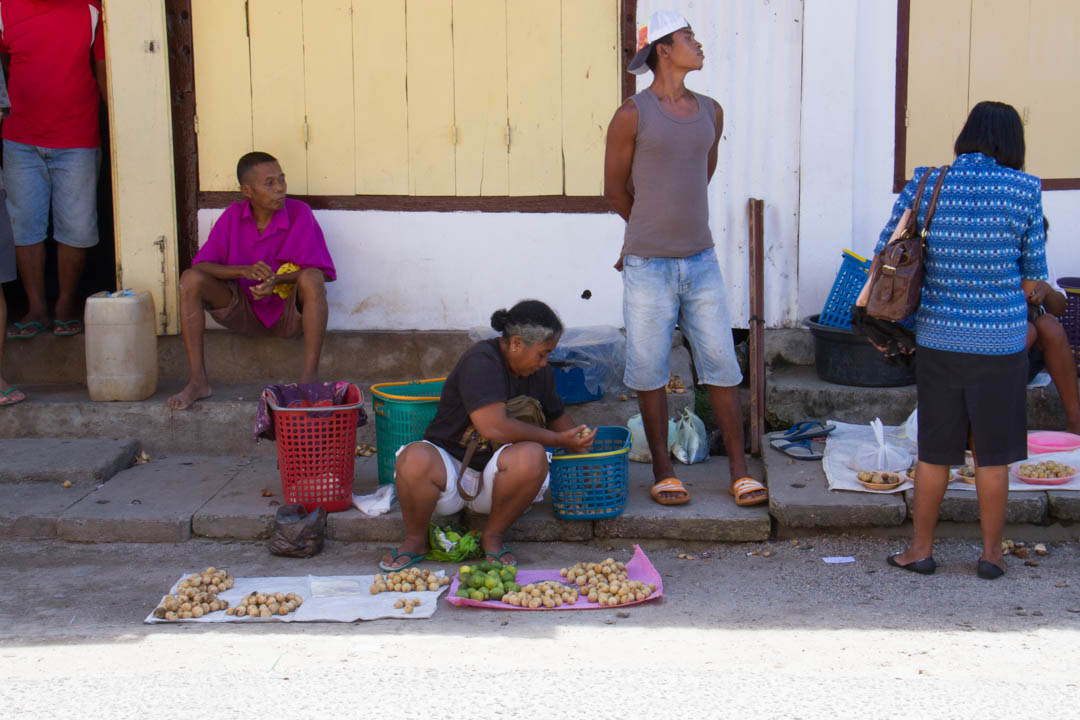 We stayed at The Natsepa Resort on Ambon, which is a beautiful waterfront location replete with palm trees. 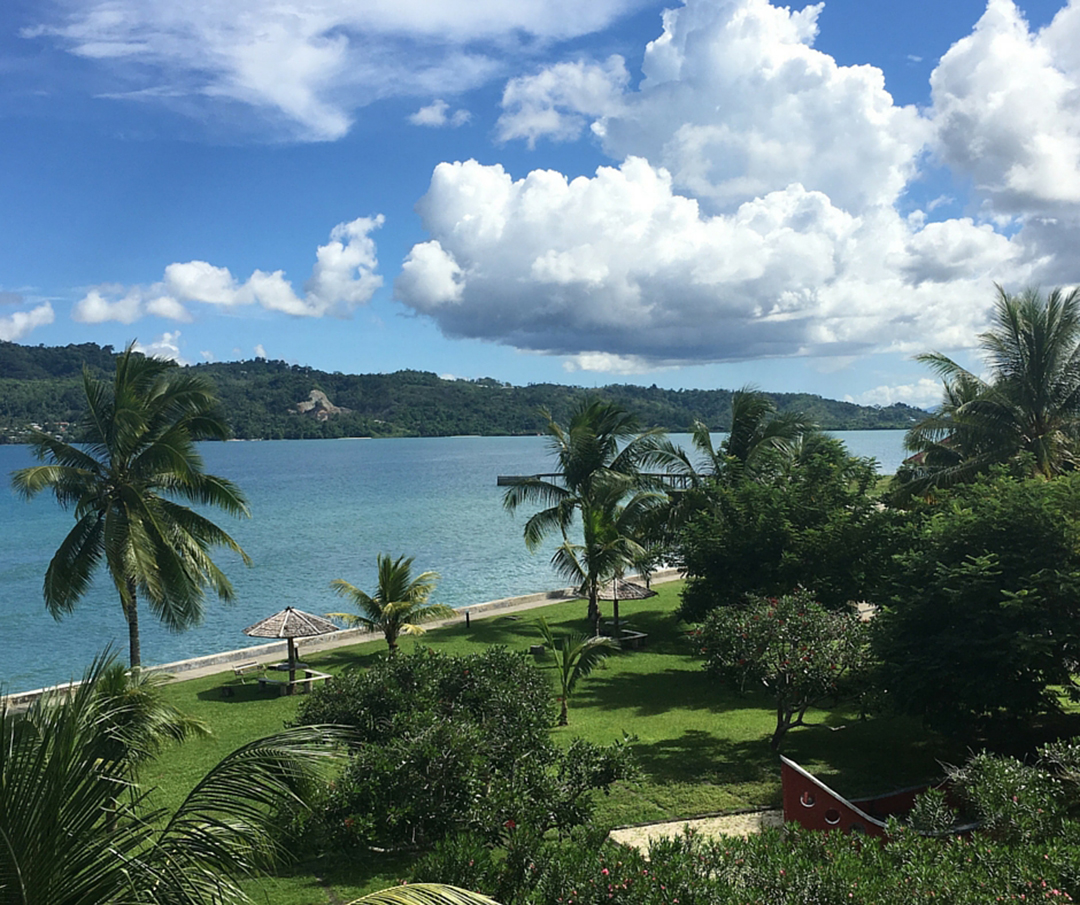 We initially stopped to have breakfast after a very early flight in the centre of Ambon City. We then went to Namalatu Beach to see the Sahureka-reka dance performance by the lovely children of the Latuhalat village. We followed this with a visit the monument of Mrs Christina Martha Tiahahu, who looks over the diverse city. 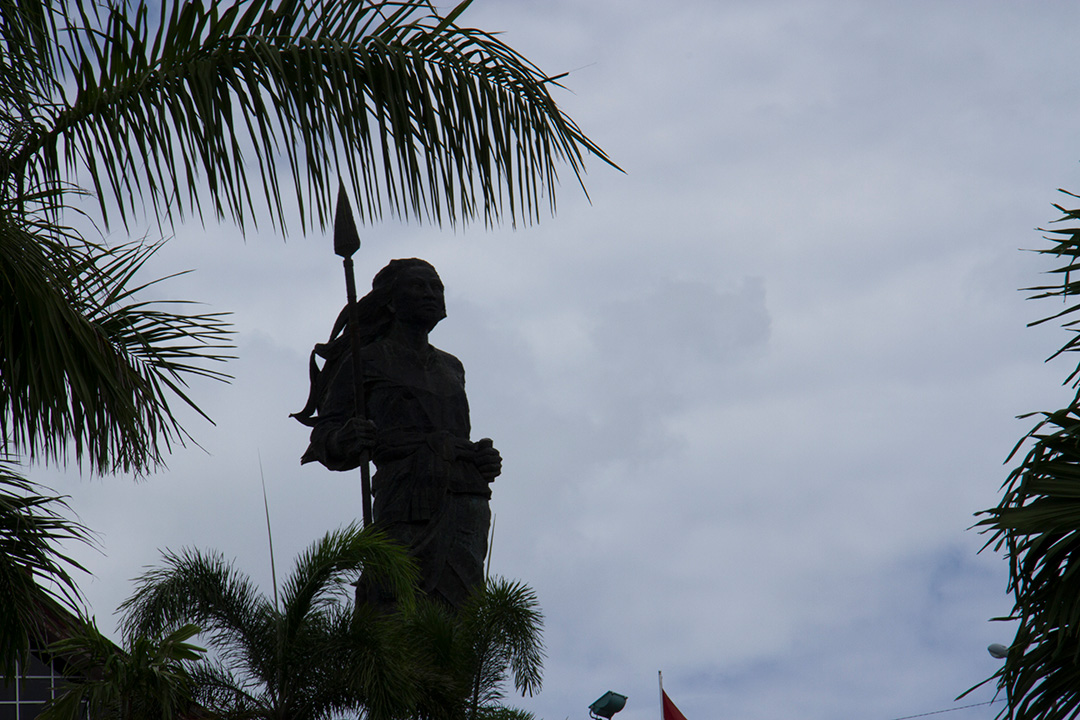 It was hard to wrap our heads around the string of coastal villages that make up Ambon. There seemed to be a village with Bob Marley painted picket fences, and a mix of mosques, churches and colour. This is one of the things that stood out to me. The Spice Islands of Indonesia are not afraid to use colour. Bright pinks, greens, and blues are everywhere as well as some creative uses of plastic water bottles to make decorations and religious crosses. This may well be a way to use up the omnipresent plastic water bottles – make art out of them. On the flip side, there was garbage and some open sewers next to manicured lawns, and beautifully maintained gardens.

As an aside: Ask the local Ambonese people to sing for you. We are told that they sing beautifully. 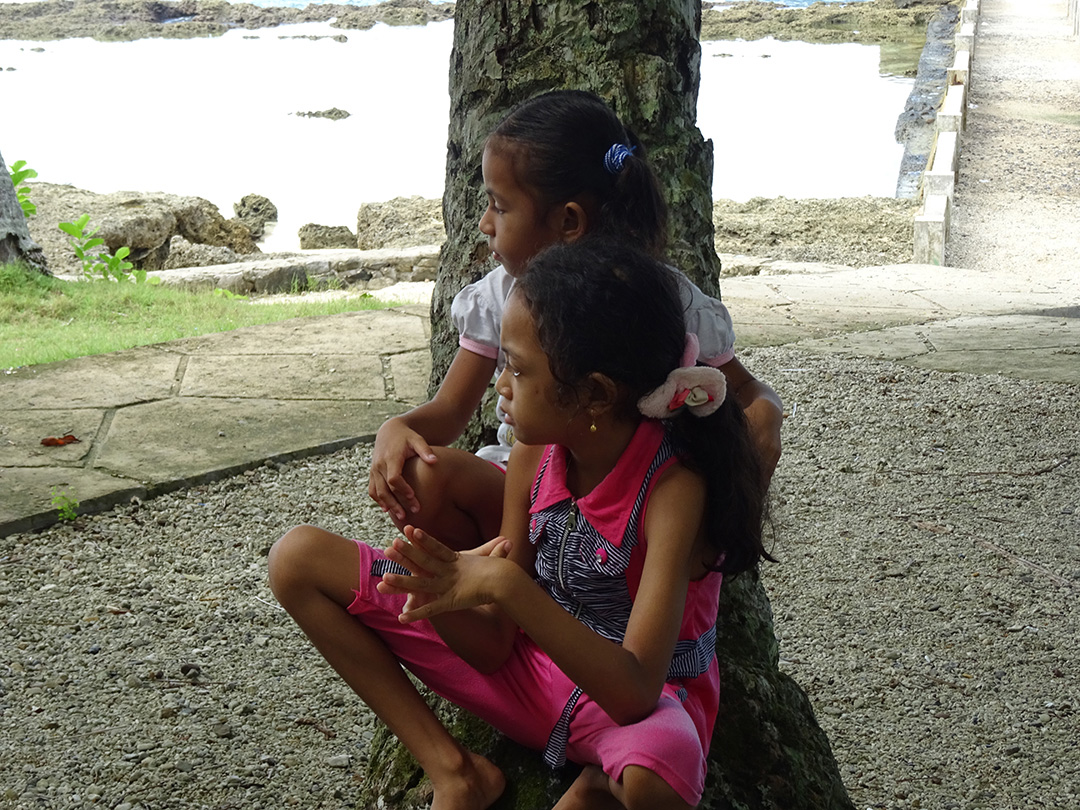 Getting to Saparua Island

We left from Tulehu on the east side of the Leihitu peninsula of Ambon. We travelled to Saparua Island on a high-speed boat. It is an 80-minute journey past some of the most stunning landscapes.

To our amusement, a seven-year-old took the helm for part of the voyage, as his father disentangled some plastic from one of the outboard motors that had stopped. Therein lies an issue that has not been addressed on the island, and in fairness is a rampant problem in many parts of Asia – the disposal of rubbish. The island is just too damn beautiful not to keep it and the surrounding waters free of plastic water bottles and such.

The 7-year-old kid drove the boat well, having grown up on the water, as is the way with all of the islanders. Fishing is now the predominant industry and playing in the water is de-riguer for kids and adults alike. 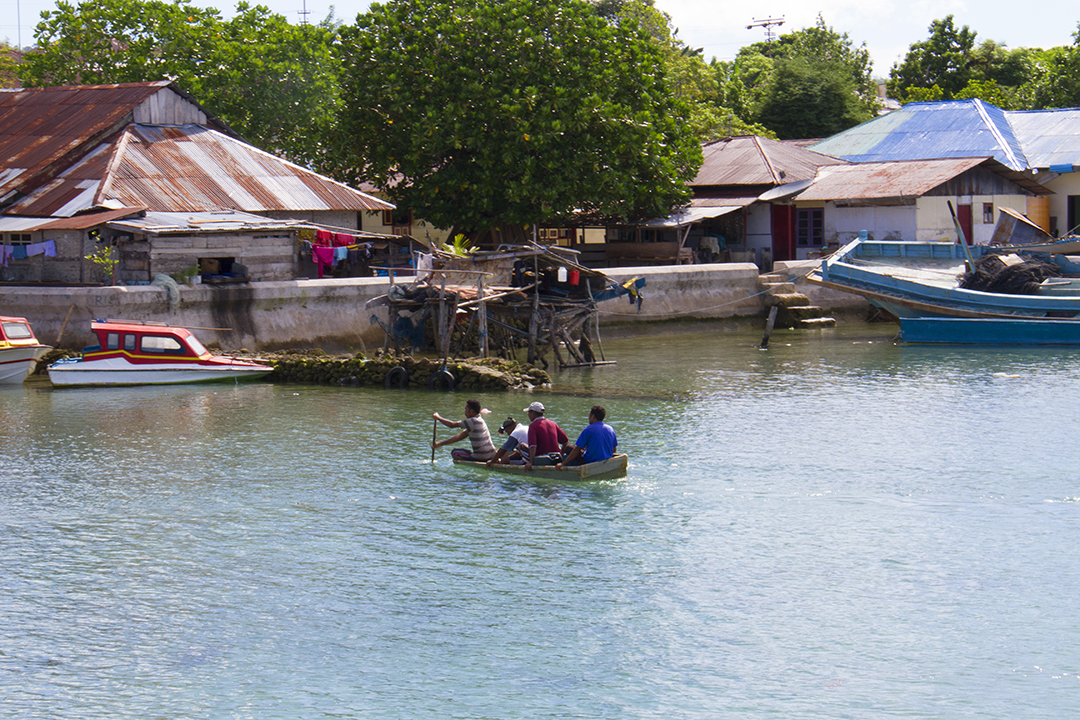 The Village of Haria, on Saparua Island

We arrived at the dock of the village of Haria. We see churches and we see mosques, and we know that despite civil strife in the late 1990’s, that this is an island now at peace with themselves and their similarities and differences. They were pleased to see us, and we were pleased to be there.

The Dutch East Indies Company established Fort Duurstede in 1691. Thomas Matulessy known as Pattimura, for whom the airport was named, was an Ambonese soldier and National Hero of Indonesia. Pattimura led an armed rebellion that captured Fort Duurstede. He was declared the leader of the Maluku people but the Dutch forces eventually caught him and he was hanged. President Sukarno declared Pattimura a national hero, and we visited the House of Pattimura back in the village of Haria. The fort and the museum are worth seeing to understand the struggles that the Maluku people had to go through. 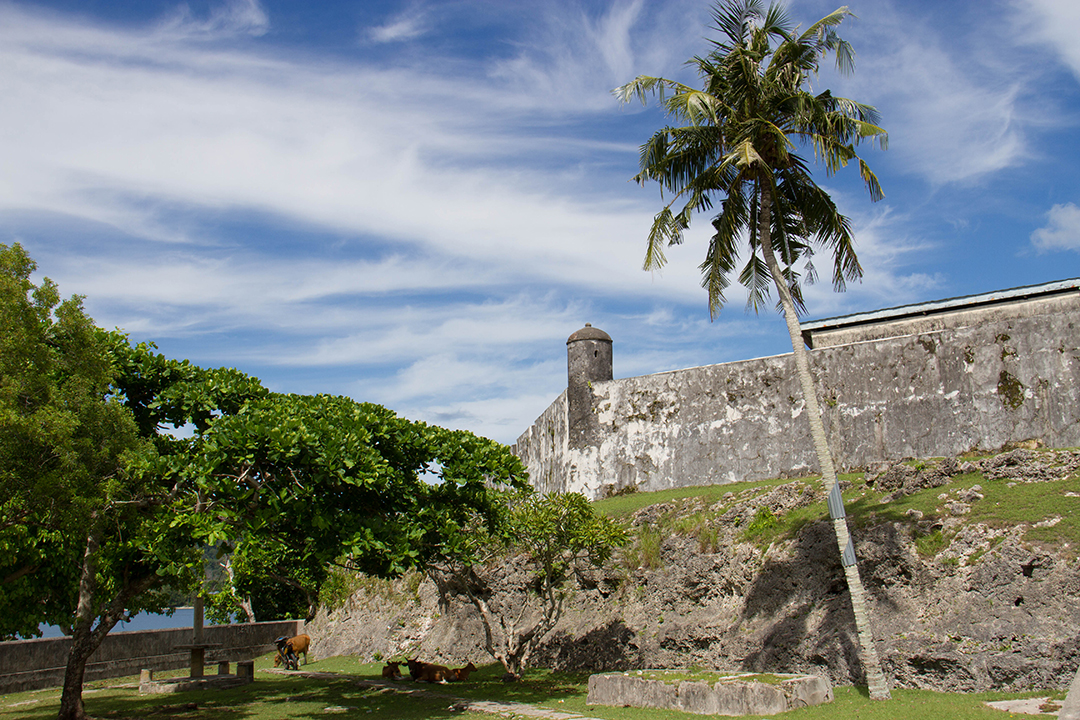 As a point of interest, despite or because of the history between the Dutch and the Maluku people, the Dutch remain a growth industry in tourism. World Bank Data 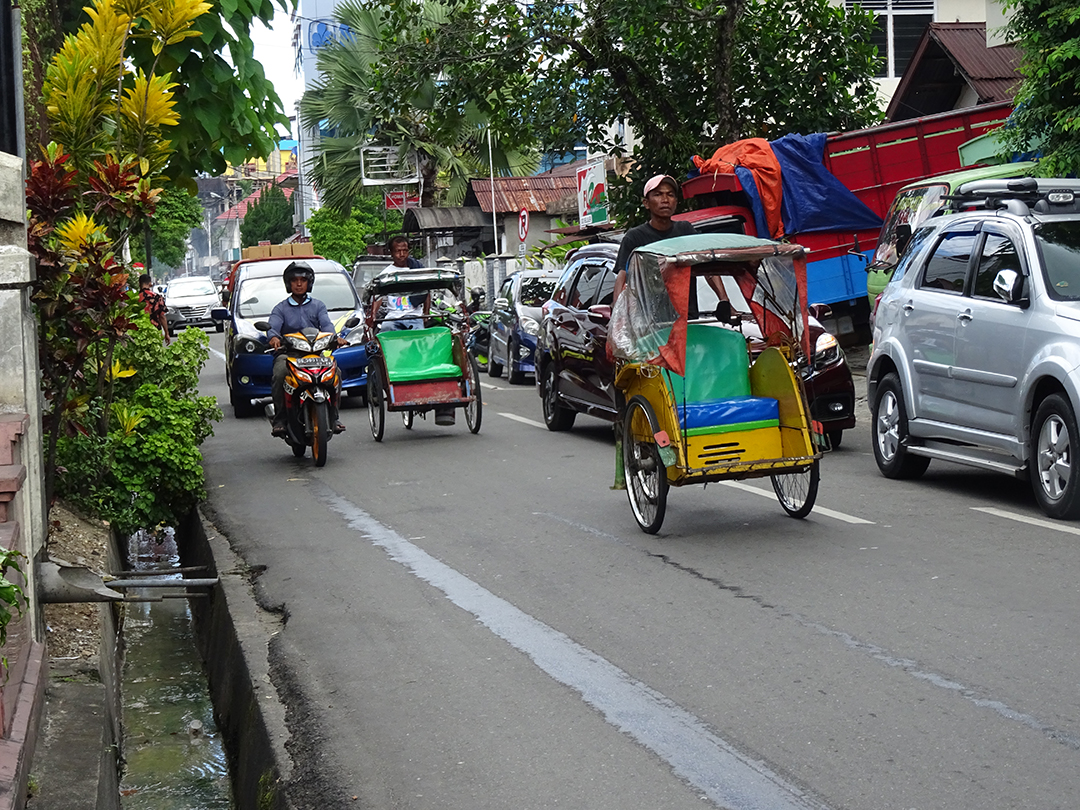 Kota Saparua or the Daily Markets

It was at the daily markets that we were able to interact with the local people. We listened to the volley of Hello Mister, as we became the centre of the islands attention. There were no touts or hawkers, no asking to be paid to take a photo of a local person, and we also willingly agreed to be in many selfies with these very amiable people. We saw and smelled cloves, tasted fresh durian, and experienced the noise, the colours and the smells of this village. It was without a doubt a highlight of our experiences. 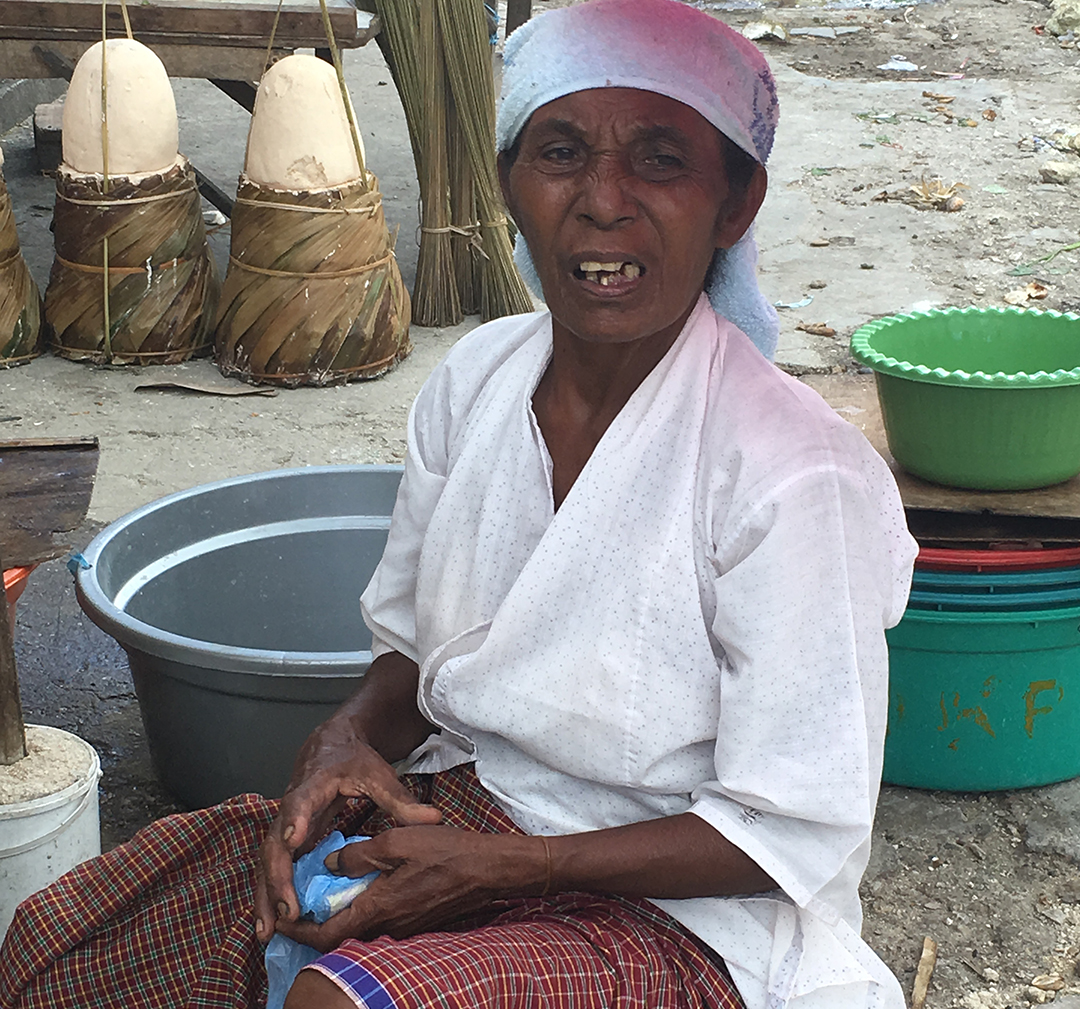 We ate at Resto Dulang Raja, a typical local cafe and feasted on freshly caught fish, vegetables, and chicken. We tried the Papeda Soup made from sago, another of the islands staple industries. 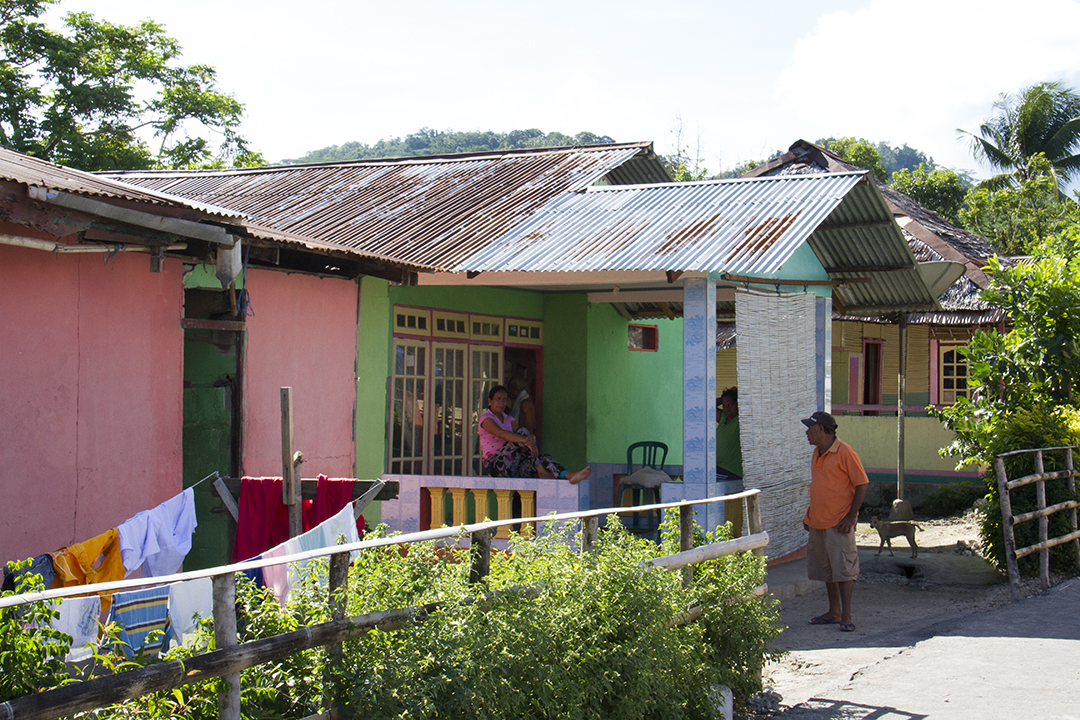 The Sirisori Islam Village was interesting as it is a village in two sections -The Christian section and the Islamic section. Here is one of the most beautiful mosques on the island and all with priceless views of the Banda Sea. The people are oblivious that they live in paradise. 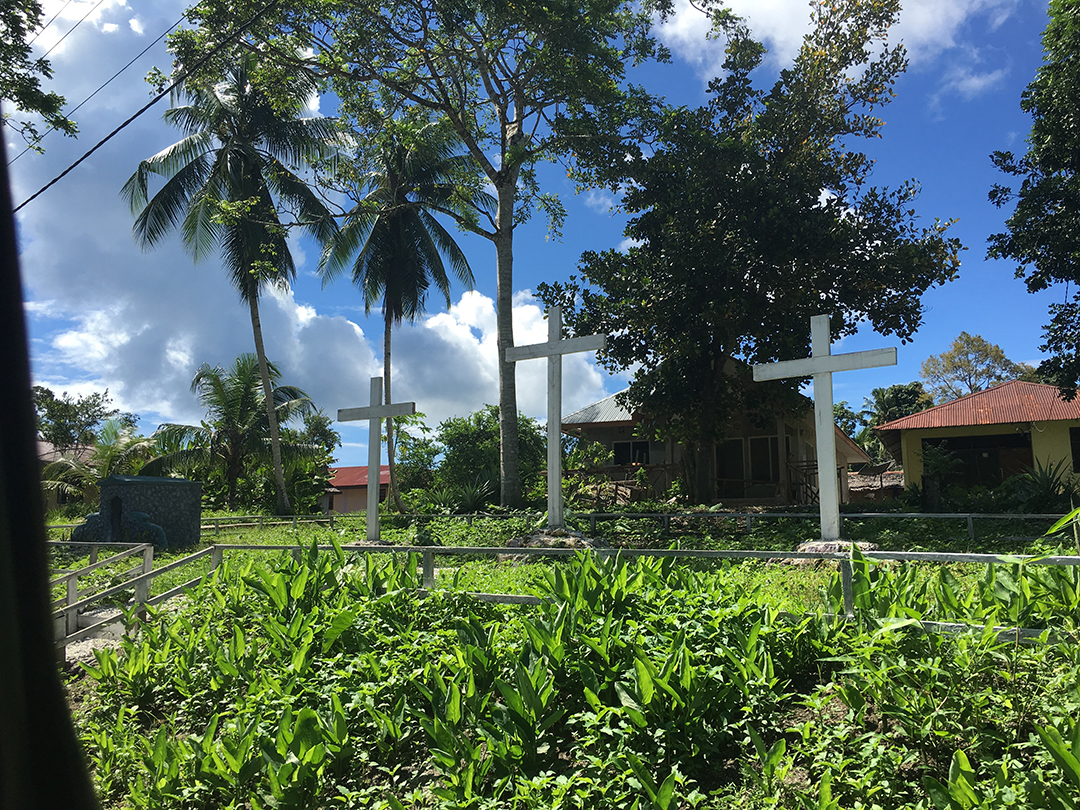 The Dutch-influenced architecture was sitting next to a mosque and Christian crosses made from the plastic bottles. There was cascading bougainvillaea’s, multi-colored houses, children playing, and blue azure seas surrounding the island. Ambon and Saparua Islands will undoubtedly beckon travellers. 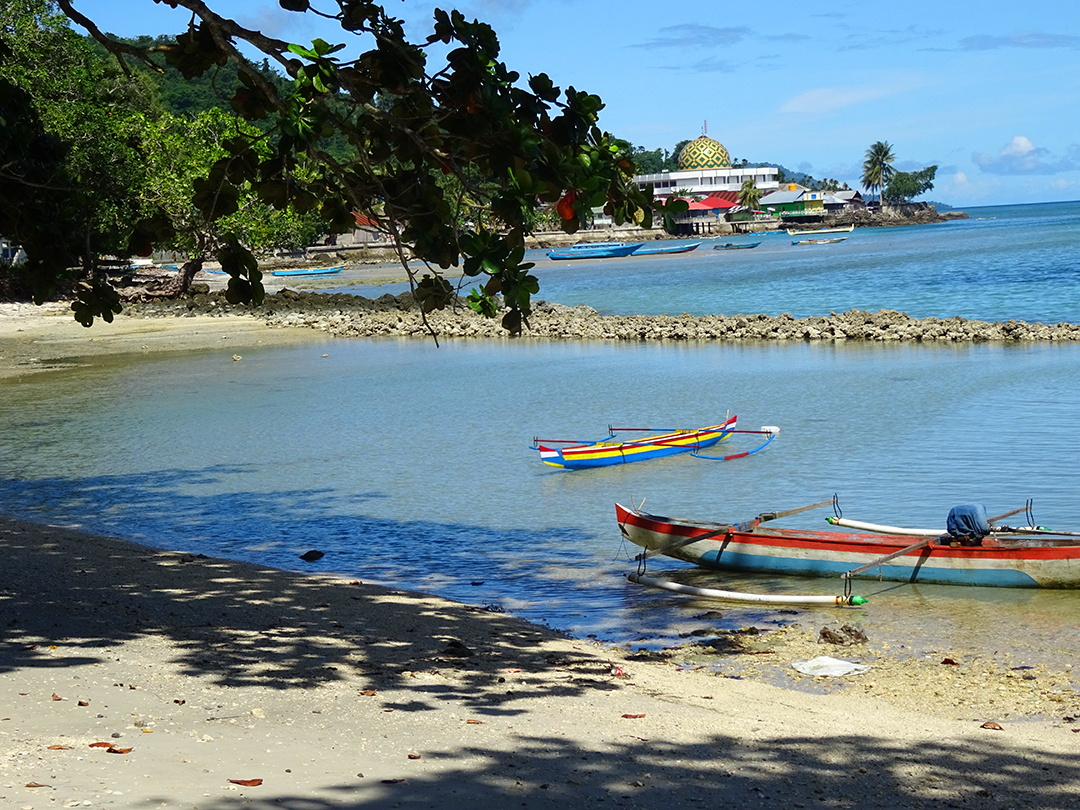 Local Knowledge of the Indonesian Spice Islands of Saparua and Ambon

It would be difficult to discover the Spice Islands on your own, and to learn as much about these unique people without some local knowledge. We proudly recommend Haical Ab of iLMi Tour.

iLMi means ‘”I Love Moluccas Indonesia”. He and his team live on the islands and know every inch of them, and indeed, they do love their home. Our excellent experiences were because of him. Because the islands are not quite ready for bulk commercial tourism, he will organise anything you want and need.

Did we like the Indonesian Spice Islands of Ambon and Saparua? No. We LOVED them and feel privileged that we have been able to see them before they inevitably become a major tourist destination. 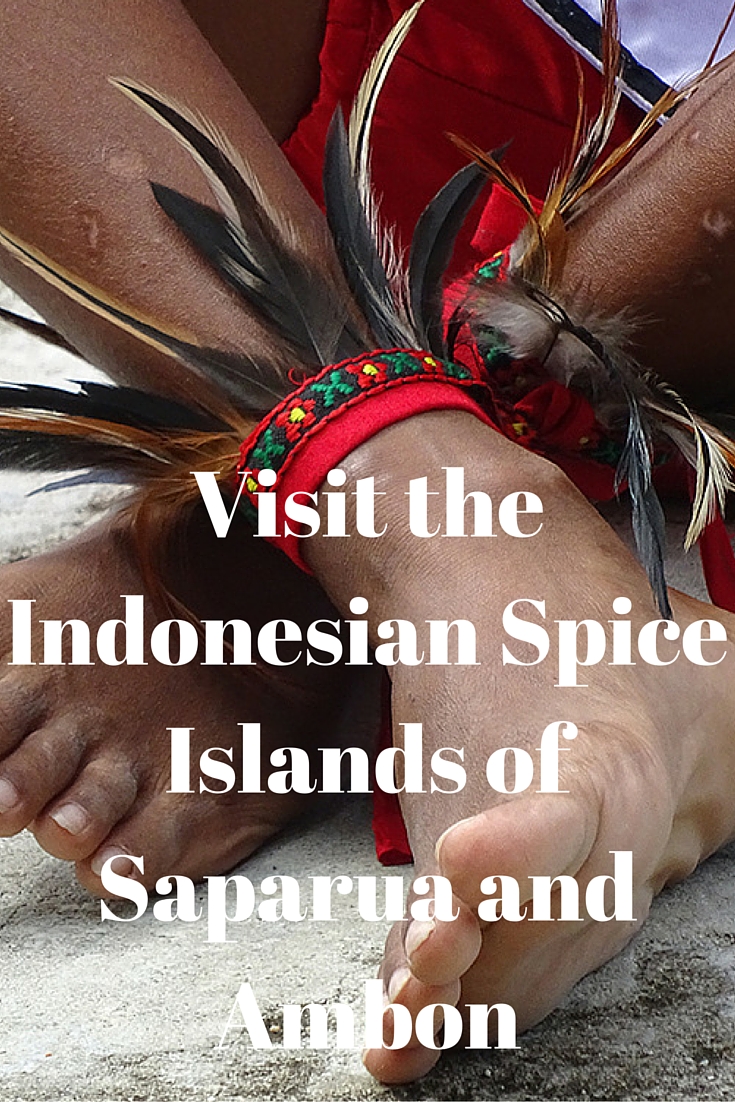 1. Link one of your inspirational travel photos or stories to this post by adding your info.
2. Copy and paste our badge and a link to this page.
3. Visit some of the other wonderful travel bloggers, read their posts, and leave a comment. It would be great if you could comment on 2-3 posts.
4. Tweet it and include this hashtag. #wkendtravelinspiration.
5. Follow all the hosts of Weekend Travel Inspiration who are working hard to spread the word on what wonderful work travel bloggers are doing.

What inspires you to travel? 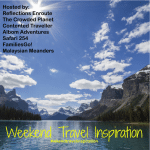 Link up your travel inspiration using the blue button below. Remember to link back to the collection on your blog.