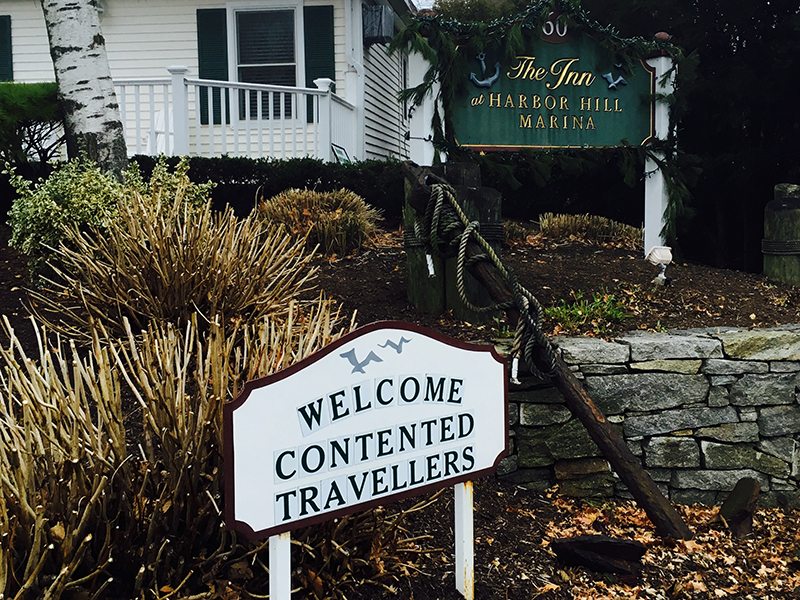 We drove through the mist to the seaside village of Niantic and to the  Harbor Hill Marina in Mystic Country, Connecticut. Niantic itself was also shrouded in this ethereal light, and this is quite a common occurrence in this far southern edge of New England.

When we arrived at the Inn at Harbor Hill Marina, the mist had lifted enough for us to see a sign saying Welcome Contented Travellers. Now that is special. 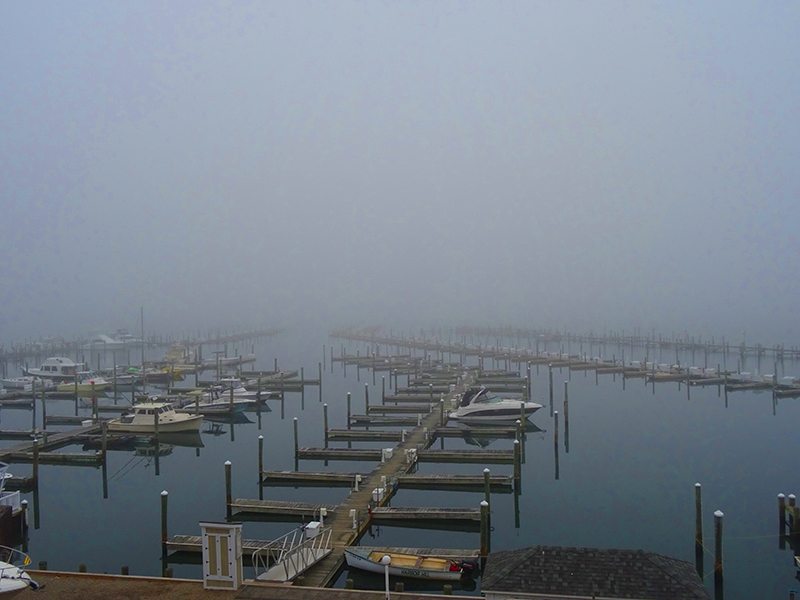 As you will know we have been visiting and writing about the 12 Distinctive Inns of New England and Inn at Harbor Hill Marina is the 11th property. I can say with great confidence that all of the inns are distinctive, and all are unique. They are situated so that you, like us, can drive between them. They are located in all states of New England – Maine, Massachusetts, New Hampshire, Rhode Island, Vermont and Connecticut, and each is quite representative of their locations.

This was our first time in Connecticut, and we appreciated our very warm and welcoming greeting from the innkeepers, Dave, and Sue and this set the tone for the entire visit. 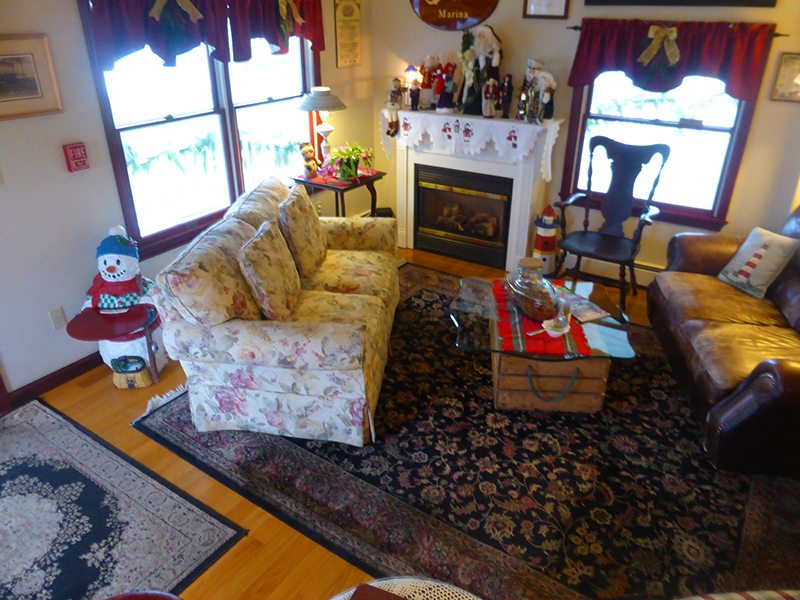 Where is the Inn at Harbor Hill Marina

Niantic is 2.30hrs from NYC and 2 hours from Boston. The inn enjoys total waterfront views of the marina district, docks and the Niantic River and our room looked directly onto the remaining moored boats, and the jetties. The rest of the boats that are normally moored here are packaged safely in plastic ready for the onslaught of winter. 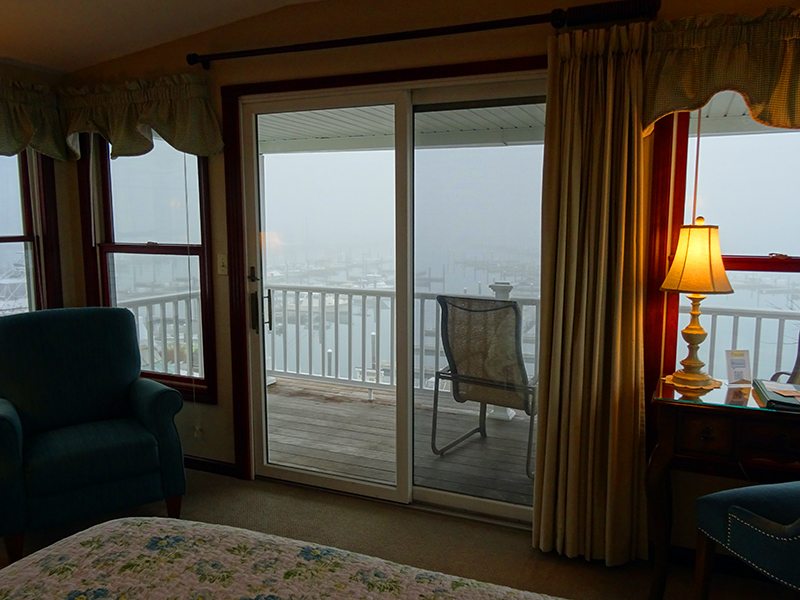 Niantic is a popular place to visit, and many people come for the boating and the fishing, and to go to the beach. The 1-mile Niantic waterfront walkway offers impressive views of Niantic Bay and Long Island Sound. Rocky Neck State Park is a popular beach and also a great starting point for treks. 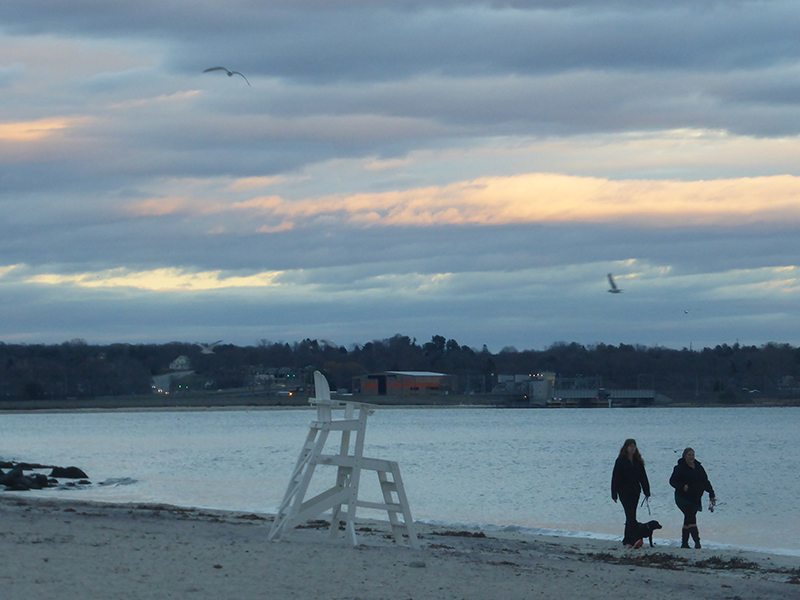 About the welcoming Inn

The Inn is 2 buildings. The original inn was built at the turn of the 20th century and reputedly was once a brothel. The rooms in this original building have water frontage as we did. The 2nd building was built 2 years ago, and the rooms are larger with more modern fixtures. It is a choice therefore between cozy water frontage rooms and the newer modern rooms. Both are lovely, but we really enjoyed watching the changing colors of both the river and the bay and the quite dramatic changes in the sky. We also loved the quaint living room with the comfy lounges. 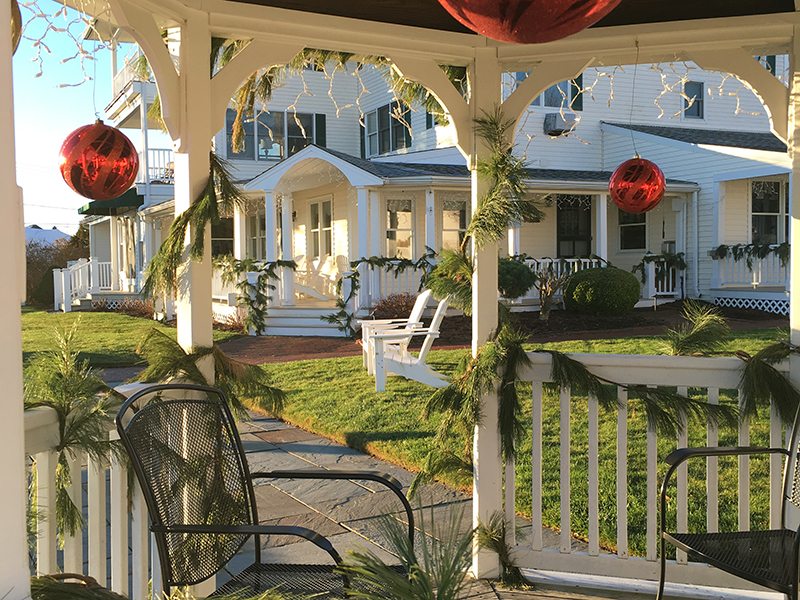 The second day was perfect and unseasonably warm weather and again our vista changed. We sat on the wraparound porch on the Adirondack chairs overlooking the marina in the morning and then enjoyed a home cooked breakfast overlooking the River and could see the men standing in the water searching or fishing for clams; not sure what you call that. 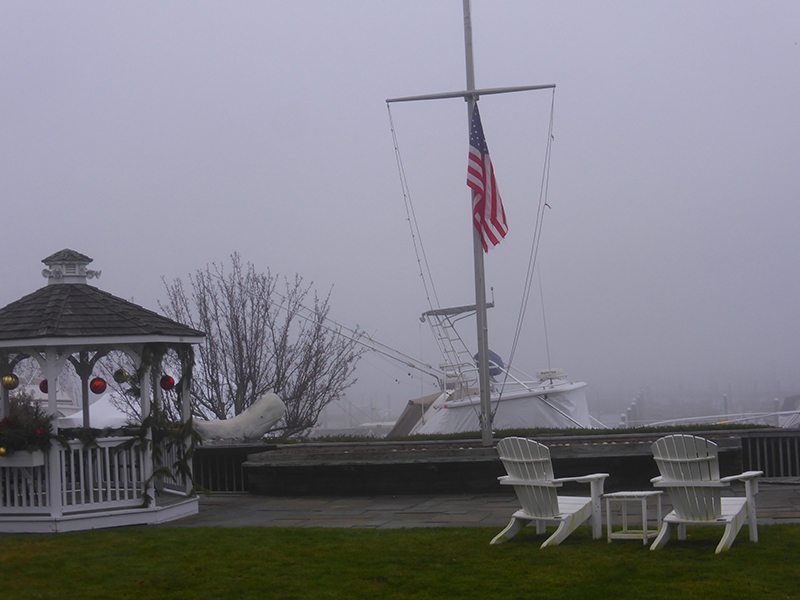 The innkeepers know the area very well, and Dave can explain everything to you. It is always helpful to have someone who knows the back routes to get to places and other information.

Now, what is Mystic Country?

Niantic is technically not a town but part of East Lyme, and this is all part of Mystic Country, Connecticut. Touted as being “a breath of fresh air”, Mystic Country lies between the major cities of Boston and NYC, and stretches over a 1,800 square-mile region. It covers the eastern third of Connecticut.

It is a vastly varied landscape from country to coast. It also has some very interesting history because Connecticut is still revolutionary, see their tourism motto and it also has two of the biggest casinos in the world, and I did not know that until we visited. There are 40 buses a day that deliver patrons from NYC to Mohegan Sun Entertainment alone, but if you stay in Niantic, it is only a 20 minute drive.

But we were here to see the sea and to learn about this nautical area and its rich maritime history. With the inn located directly on the mooring pier, it sets the scene well. 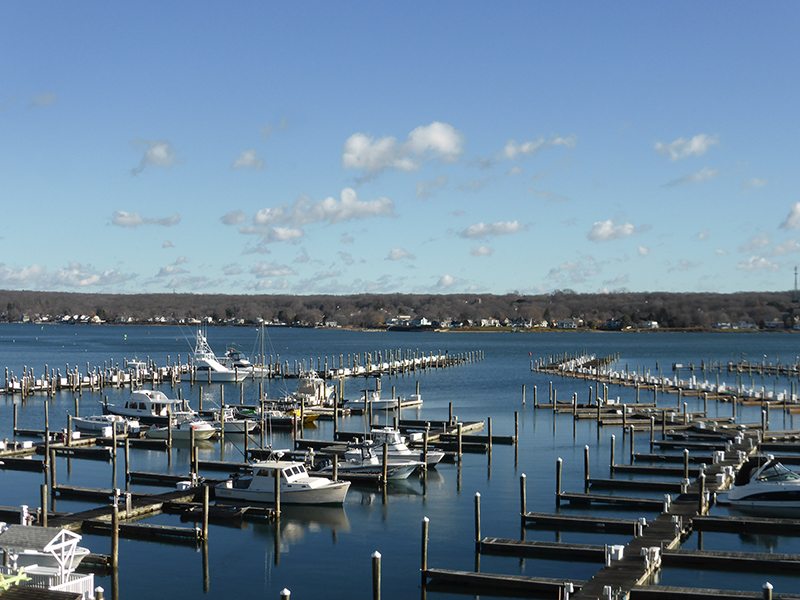 Exploring The village of Niantic (part of East Lyme)

As mentioned earlier, it is a lovely and easy walk along The Niantic Bay Boardwalk, and one you will enjoy.

The Book Barn. We were actually headed to the main Book Barn because this is a barn with books and cats wandering around. However, by mistake, we stopped at the Annex location Book Barn in downtown Niantic. This was fortuitous as the man there; a local was a cross between Sheldon Cooper of Big Bang Theory and a dissident existentialist with a very interesting point of view on many things. I would highly recommend walking in for a chat. 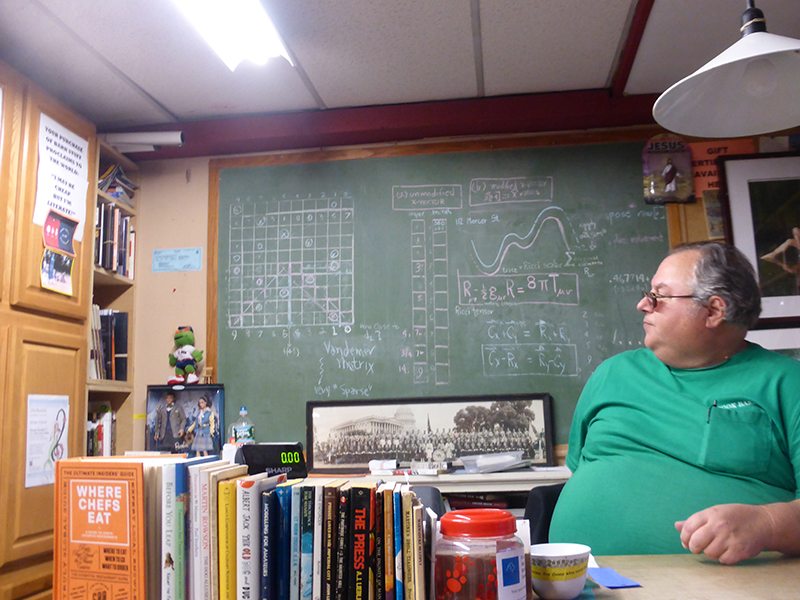 We travel to the cutesy Mystic Historic Village, approx. 20 minutes from Niantic, which is rich in maritime history. You may remember Mystic from the Movie, Mystic Pizza., the coming-of-age movie with Julia Roberts. It is a town where you can often do some star spotting with Talyor Swift recently seen eating at the Mystic Drawbridge Ice Cream store and others dropping in to explore this area. It has been the filming location for movies like Mystic River, but that was obvious. 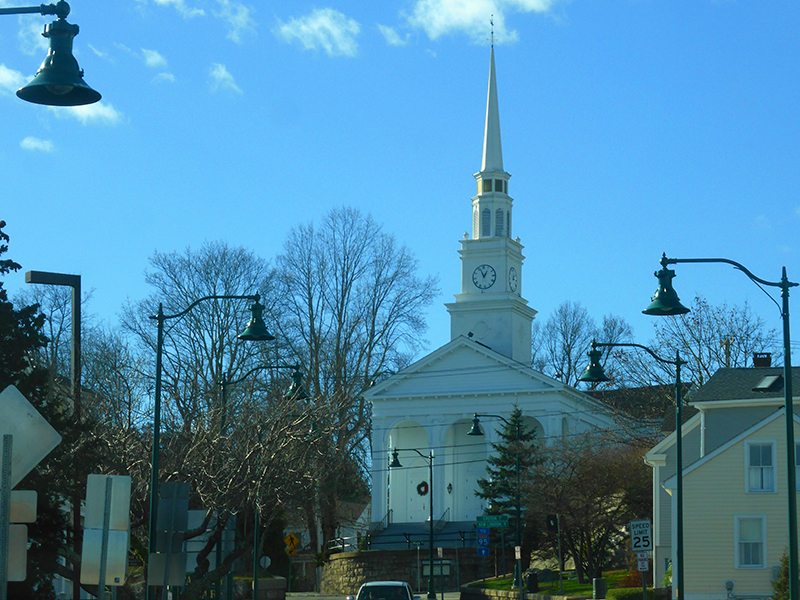 The Mystic River Bascule Bridge is a bascule bridge or drawbridge meaning that at different times in the day it opens to allow boats through. It goes across Mystic River. 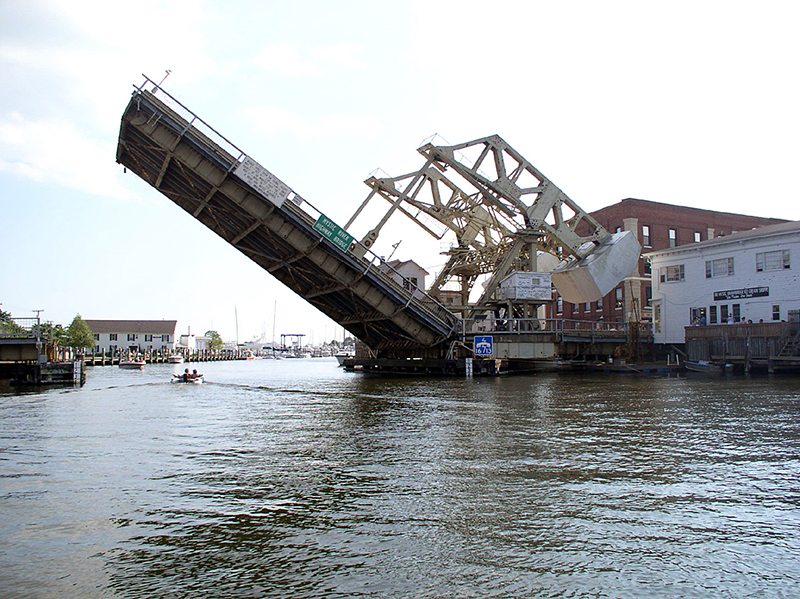 We were fortunate to have a personal guided tour of Mystic Seaport with Marketing Executive , Sarah Spencer. Mystic Seaport is The Museum of America and the Sea and is reputedly the largest maritime museum in the world. It is more than the highly impressive collection of sailing ships and boats because it is also a foremost ship repair center.
The Preservation Shipyard is an important part of the museum, and the skilled artisans can use both modern techniques as well as traditional tools and techniques to preserve the Museum’s collection of historic vessels. Being repaired as we wandered around was La Amistad. The story is interesting. It was once a slave boat, but the slaves led a revolt in 1838 when they found out that they were to be killed and eaten. When they were finally captured the case went to the supreme court of the USA and they were freed. To read more of the details click here. 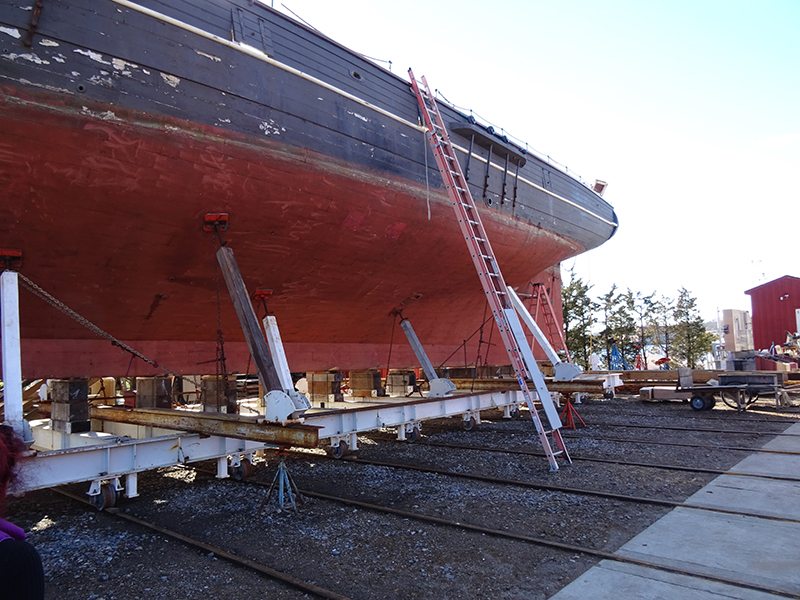 Mayflower II is owned by Plimoth Plantation and is undergoing a multi-year restoration in the Henry B. duPont Preservation Shipyard at Mystic Seaport. The restoration of the nearly 60-year-old wooden ship is being carried out over several years with the ship spending winter and spring at Mystic Seaport and returning to Plymouth each summer and fall. The project is scheduled for completion prior to 2020—the 400th anniversary of the Pilgrims’ arrival. 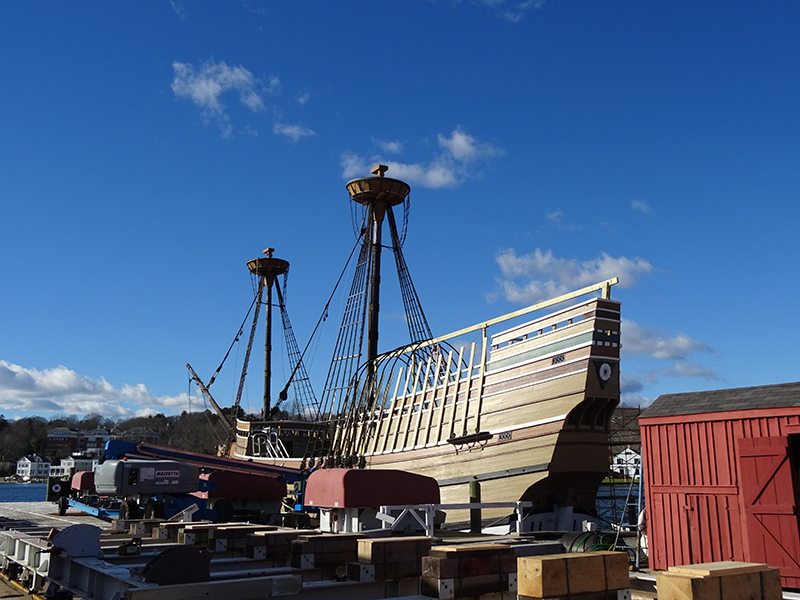 Mystic Seaport is an entire village set on 19 acres and is the re-creation of a 19th-century seafaring village. It is a hands-on experience where visitors can do and try many of the activities associated with this maritime village as they like.

There are more than 60 original historic buildings, and many of them have been moved to this site from around the New England area to both preserve the history and to allow visitors to learn about the importance of the sea in our lives.

The museum was established in 1929 as the Marine Historical Association but came to prominence after the acquisition of the Charles W. Morgan, the only surviving wooden sailing whaler in 1941. This is the star of the show, without a doubt, and The 38th Voyage of the Charles W. Morgan took place in 2014 after much restoration and speculation as to what she would be like to sail. Sarah was a crew member and says she can appreciate the ingenuity that was used to create these vessels way back in 1841. 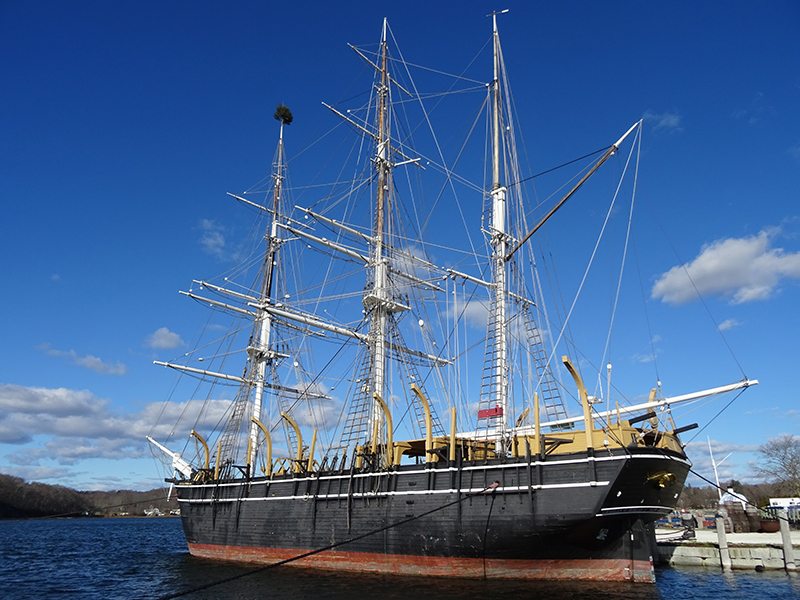 Owner and chef of Frank’s Gourmet Grille in Mystic is Frank Grace. He is a very welcoming host and his food is outstanding. Obviously we were not the only people to think so as the restaurant was packed. We had been told to have his speciality grilled mussels and we did, and if we lived closer we would return again and again for these. Our lovely waiter told us to use the freshly baked foccacia to mop up the butter sauce and we did. We followed up with Franks suggested Beef Wellington, and it was as good as the mussels, nearly, because those mussels were seriously good. Frank is one of those really nice men and a talented chef at that.It is one of those places that makes you feel good and one we recommend when you visit Mystic, Connecticut. 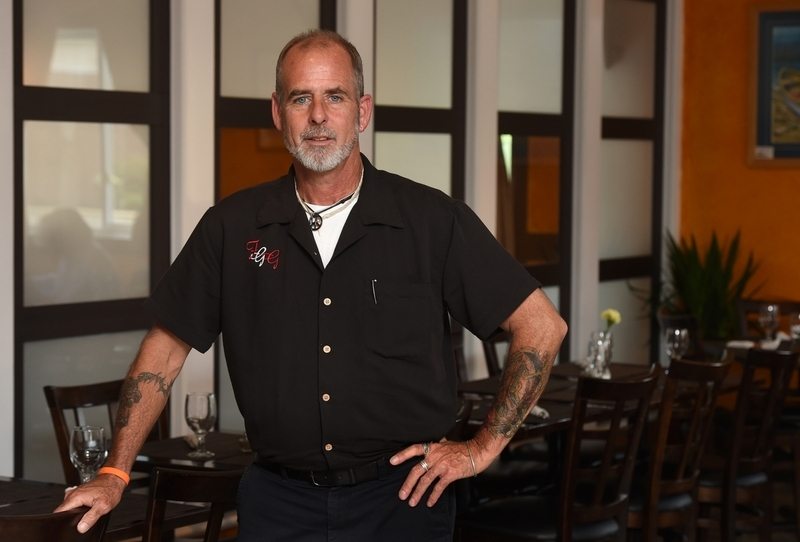 There are eight lighthouses, throughout Mystic Country, and each is distinctive like the New London Ledge Lighthouse, (1909). This lighthouse in Groton, CT is haunted apparently by Edgar the ghost, Read more here. The wealthy homeowners on the nearby shore wanted the new lighthouse to match the elegance of their residences, and so it was built in the French Second Empire style. The Coast Guard took over manning the lighthouse in 1939, and it was automated in 1987. New London Harbor Lighthouse (1801) 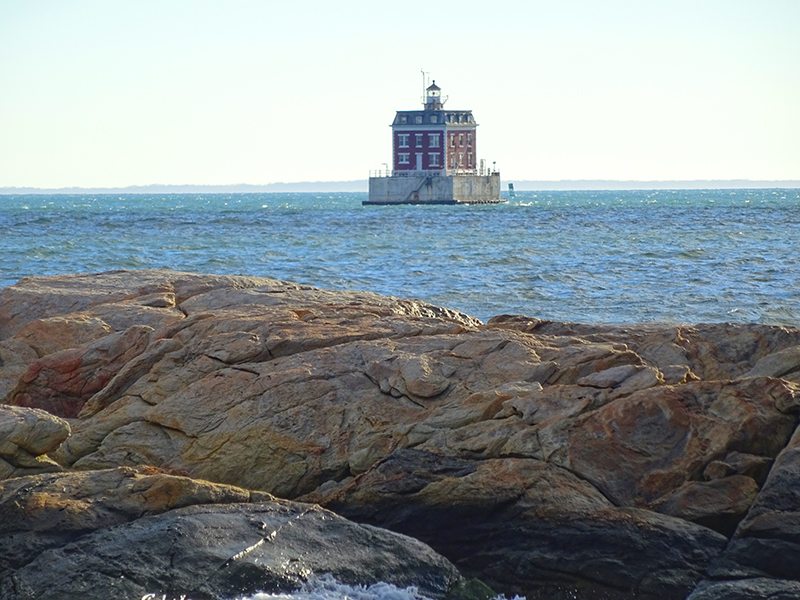 When we returned to the Harbor Hill Marina in Niantic, we grabbed a coffee and a biscotti, went and sat in the pagoda and watched the sun set over the water. This is a welcoming inn and one that we enjoyed staying at.

Contented Traveller were the guests of Dave and Sue of Harbor Hill Marina, Distinctive Inns of New England, Mystic Seaport